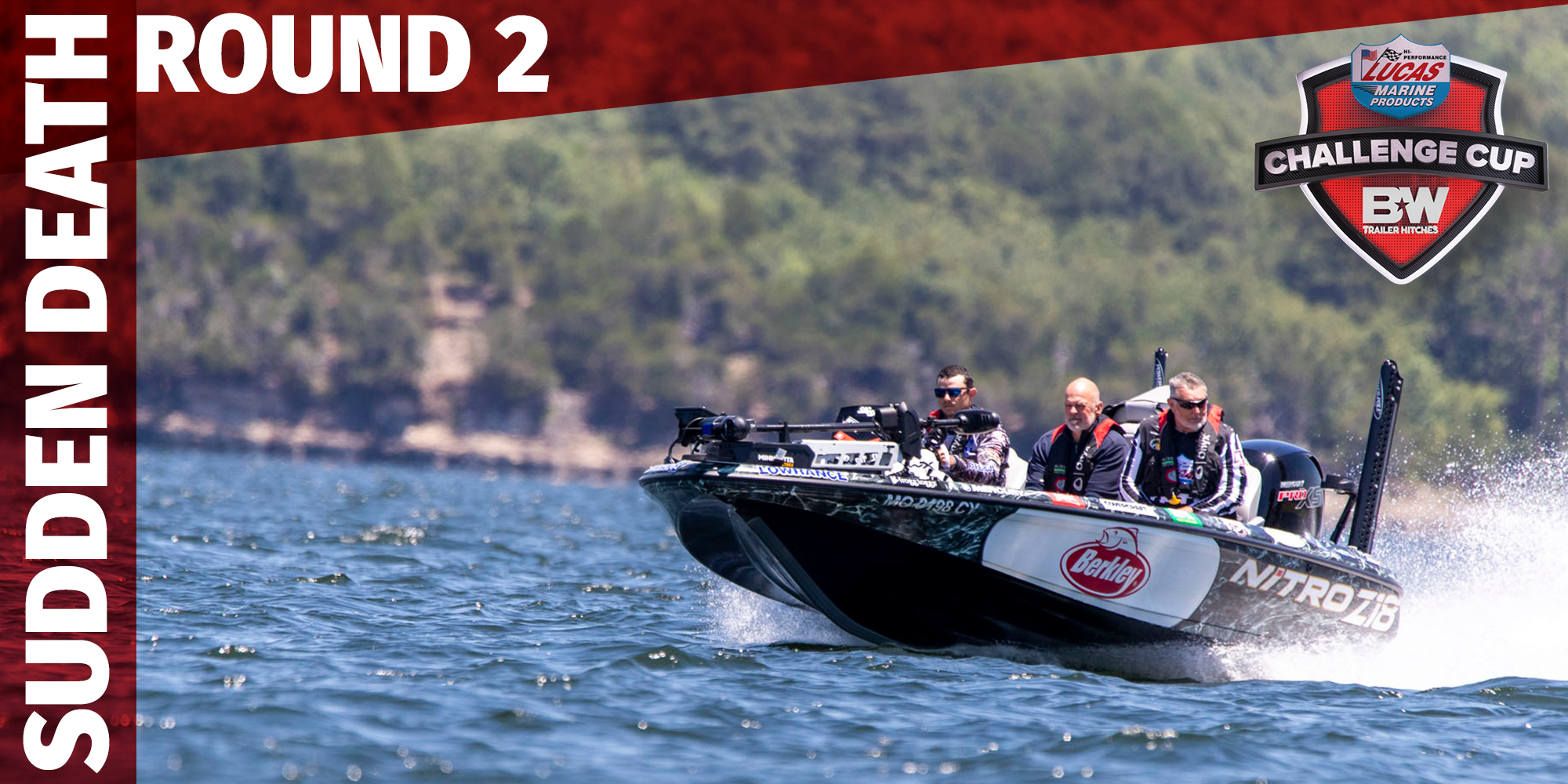 Jordan Lee is one of nine anglers competing in Sudden Death Round 2 of the 2020 Challenge Cup. Photo by Josh Gassmann

MOUNTAIN HOME, Ark. – On Saturday we’ll watch another race on Bull Shoals Lake for Sudden Death Round 2 of the 2020 Lucas Oil Challenge Cup Presented by B&W Trailer Hitches. Nine anglers will try to get enough bites to hit the SIG SAUER Target Weight of 25 pounds for the day. Only the first four pros to reach the Target Weight will move on to the Championship Round, where they will compete against the four qualifiers from Sudden Death Round 1.

While the water on Bull Shoals Lake remains extremely high—around 25 feet higher than normal—there is not a cloud in sight over Northern Arkansas. The anglers have 8,800 surface acres and 50 miles of shoreline to work with in this portion of Bull Shoals Lake. A stiff north wind, clear skies and clear water are the conditions the pros will be faced with. Flooded brush, timber and grass will be the main points of focus in terms of cover, but expect the anglers to focus on sawdust piles as well. Watch for some of the nine pros to also try and get the offshore bite working. A school of spotted bass could be very important in trying to inch closer to 25 pounds.

Takahiro Omori headlines this group of nine pros after winning Elimination Round 3 by more than 7 pounds. Omori is no stranger to MLF Cup competition. The Japanese pro has been fishing in MLF Cup events since its inception in 2011 on Lake Amistad. Although he has years of experience under his belt, he has yet to earn an MLF win. Watch for Omori to try and take another step toward securing his first championship.

Jordan Lee is always a name to watch when he’s in the field. The 2019 Bass Pro Tour Stage One Champion finished in third during Elimination Round 2 after catching 25 bass for 40-10. Mike Iaconelli finished one spot ahead of Lee in that Elimination Round with 21 bass for 46-3. Ike is looking to make it to the Championship Round for a chance at his third MLF win.

Michael Neal has seen plenty of Sudden Death Rounds during his time fishing the MLF Selects. However, he has yet to make it past a Sudden Death Round to qualify for a Championship Round. Neal will try to get the Sudden Death monkey off of his back to be one of the final eight pros with a shot at a Challenge Cup trophy.

The nine competing anglers bring us Sudden Death Round 2 on Saturday, Feb. 1 at 2 p.m. ET on Outdoor Channel.