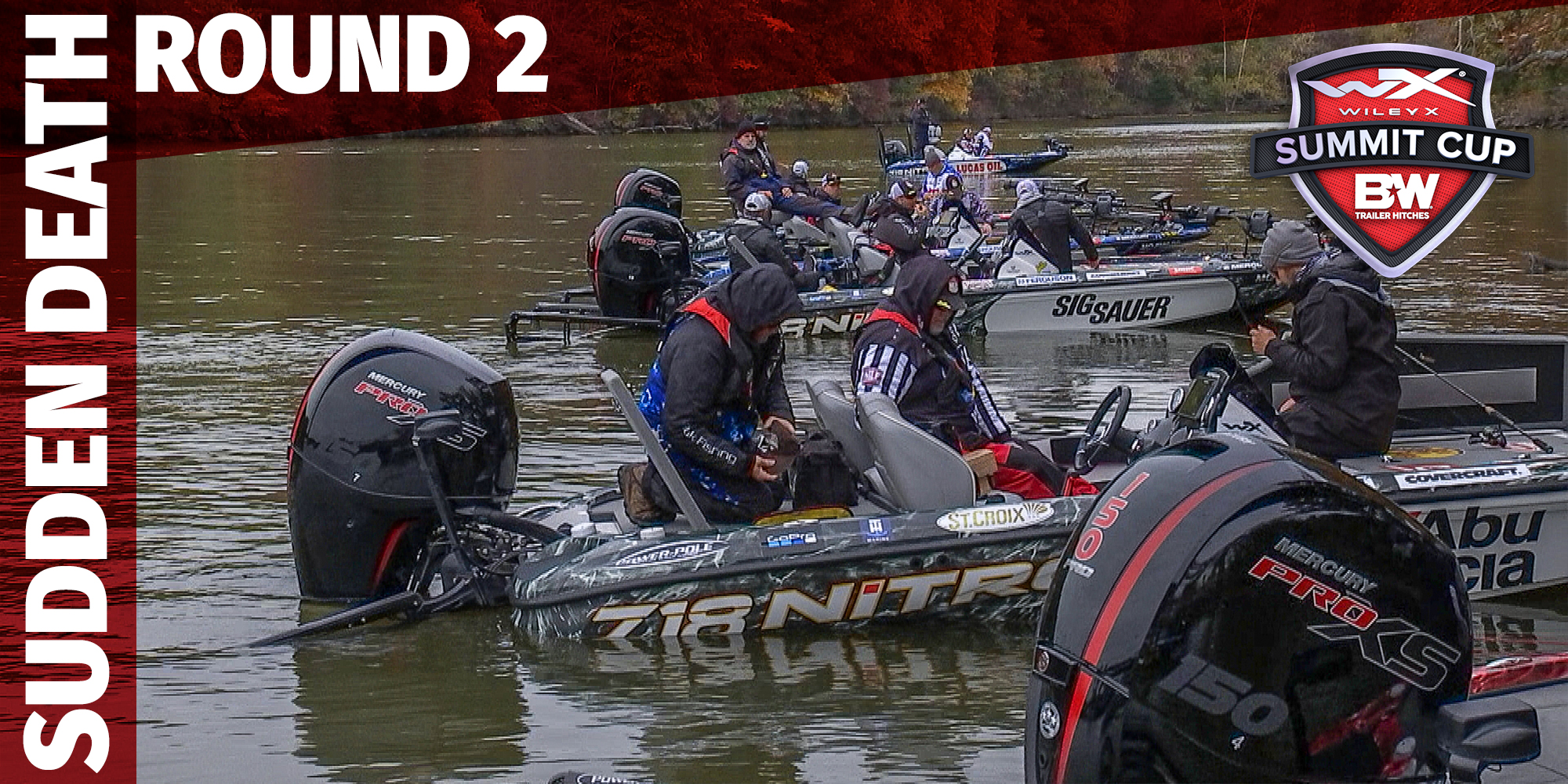 The remaining nine anglers of hit the Missouri waters for Sudden Death Round 2 of the Wiley X Summit Cup Presented by B&W Trailer Hitches.

OSAGE BEACH, Mo. – There are four spots remaining in the Championship Round of the 2020 Wiley X Summit Cup Presented by B&W Trailer Hitches, and those four spots will be filled after Sudden Death Round 2 on Lake of the Ozarks.

Nine anglers will compete to be one of the first four to reach the 17-pound Target Weight to move on to the Championship Round to meet the four anglers from Sudden Death Round 1.

Cloudy Day in the Ozarks

There will be very little sunshine throughout most of the day in the Grand Glaize Creek arm area of Lake of the Ozarks. With more than 68 miles of shoreline and over 3,500 surface acres, MLF analyst Marty Stone thinks the conditions line up perfectly for the pros to hit the Target Weight quickly.

“The anglers are going to notice that the water is very stained today,” Stone explained when the Summit Cup was filmed in October of 2019. “The water temperature is in the mid- to high-60s with plenty of baitfish. They will also find docks, marinas, laydowns and rocky banks throughout with bluff walls and bluff ends.”

The cloudy weather may not make it a comfortable day for the anglers with air temperatures hovering in the 40s, but Stone believes that the cloud cover is going to play a crucial role in the day’s success for the four advancing pros.

“The bass in the Ozark lakes get into a feeding frenzy on cloudy days like the one we have for Sudden Death Round 2,” Stone highlighted. “With isolated cover scattered throughout, the fish will also expand their strike zone. There’s plenty of fish transitioning to the backs of creeks and creek arms, so it’s up to the anglers to find them quickly today.”

The main prize for these nine anglers is a shot at the Championship Round and a Summit Cup trophy, but many also have their eyes on another prize—General Tire World Championship qualification. So far, four anglers competing in Sudden Death Round 2 have already secured their spots in the World Championship: Edwin Evers, Brent Ehrler, Andy Montgomery and Jordan Lee.

The remaining five pros need at least a Top 3 finish in the Championship Round of the Summit Cup to move on to the World Championship. However, there’s no tomorrow if you don’t reach 17 pounds today.

Brandon Coulter, Alton Jones Jr., Cody Meyer, Wesley Strader and Scott Suggs round out the field of nine. Coulter and Suggs will be seeing their first Sudden Death Round of the year as the Summit Cup is the only Cup event the two have qualified for.

Meyer, Lee, Evers and Ehrler are all looking to advance to their second-straight Championship Round after making it through Sudden Death in the 2020 Patriot Cup.

The nine competing anglers bring us Sudden Death Round 2 on Saturday, June 13 at 2 p.m. ET on Outdoor Channel.