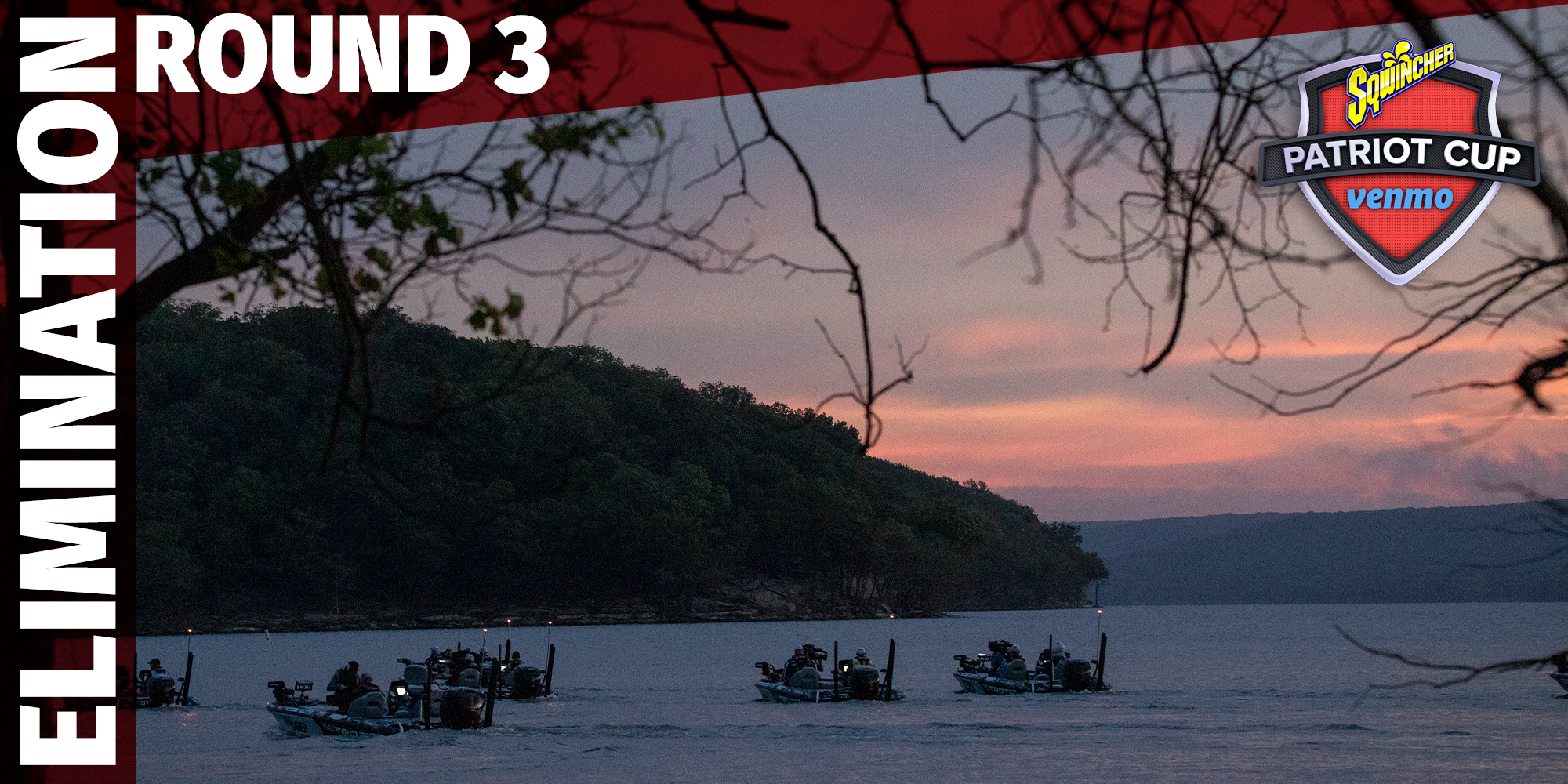 The final 10 anglers hit the water for the 2020 Sqwincher Patriot Cup Presented by Venmo Elimination Round 3. Photo by Joe Branch

MUSKOGEE, Okla. – Two Elimination Rounds down, one to go on Fort Gibson Lake for the 2020 Sqwincher Patriot Cup Presented by Venmo. Ten anglers set out to try to get a late-September bite on the northern end of Fort Gibson Lake, a zone of more than 5,700 surface acres and more than 100 miles of shoreline. Only six will move on and join the other 12 anglers in the Sudden Death Rounds.

However, if the anglers want to move on, they will have to manage a lake some of them have never been to before and high water levels all around the lake.

Along the shoreline anglers will find flooded brush and vegetation due to those water levels. A marina and floating boat docks are places anglers can look for bass hugging man-made cover. Also be on the lookout for anglers targeting rocky banks and bluff walls on the eastern Oklahoma lake.

Stone thinks that this Elimination Round will be more about where the fish are in the water column than where they are in terms of structure and cover.

“The anglers that move on will be the anglers that discover that the fish on Fort Gibson Lake are not related to the bottom,” Stone advised. “Instead, they are in the upper-third of the water column chasing the shad that are suspended up high.”

Ott DeFoe headlines a solid group of 10 as one of the biggest names in the field. DeFoe entered the Patriot Cup in late 2019 as the sixth-ranked angler in terms of qualifying points for the Cup event. The Tennessee angler recently took home the 2020 Bass Pro Tour Stage Three trophy from Lake Fork, Texas, his first win in an MLF event.

Mark Rose is the top-ranked angler entering the Patriot Cup after fantastic finishes in Stages Five and Six of the 2019 Bass Pro Tour. Rose is looking for the first MLF win of his career.

Jason Christie is an Oklahoma native who calls Park Hill home, just a short drive away from the shores of Fort Gibson Lake. Christie is competing in his second MLF Cup event of the season after fishing in the Challenge Cup.

Marty Robinson, Josh Bertrand and Brent Chapman are getting their first taste of a Cup event this season. Bobby Lane, Wesley Strader, Bradley Roy and Matt Lee got a taste of Cup contention in either the 2020 Challenge or Summit Cup.

The 10 competing anglers bring us Elimination Round 3 on Saturday, April 18 at 2 p.m. ET on Outdoor Channel.