Wheeler Sprints to Target Weight; Powroznik, Rose & Scroggins on to Championship Round 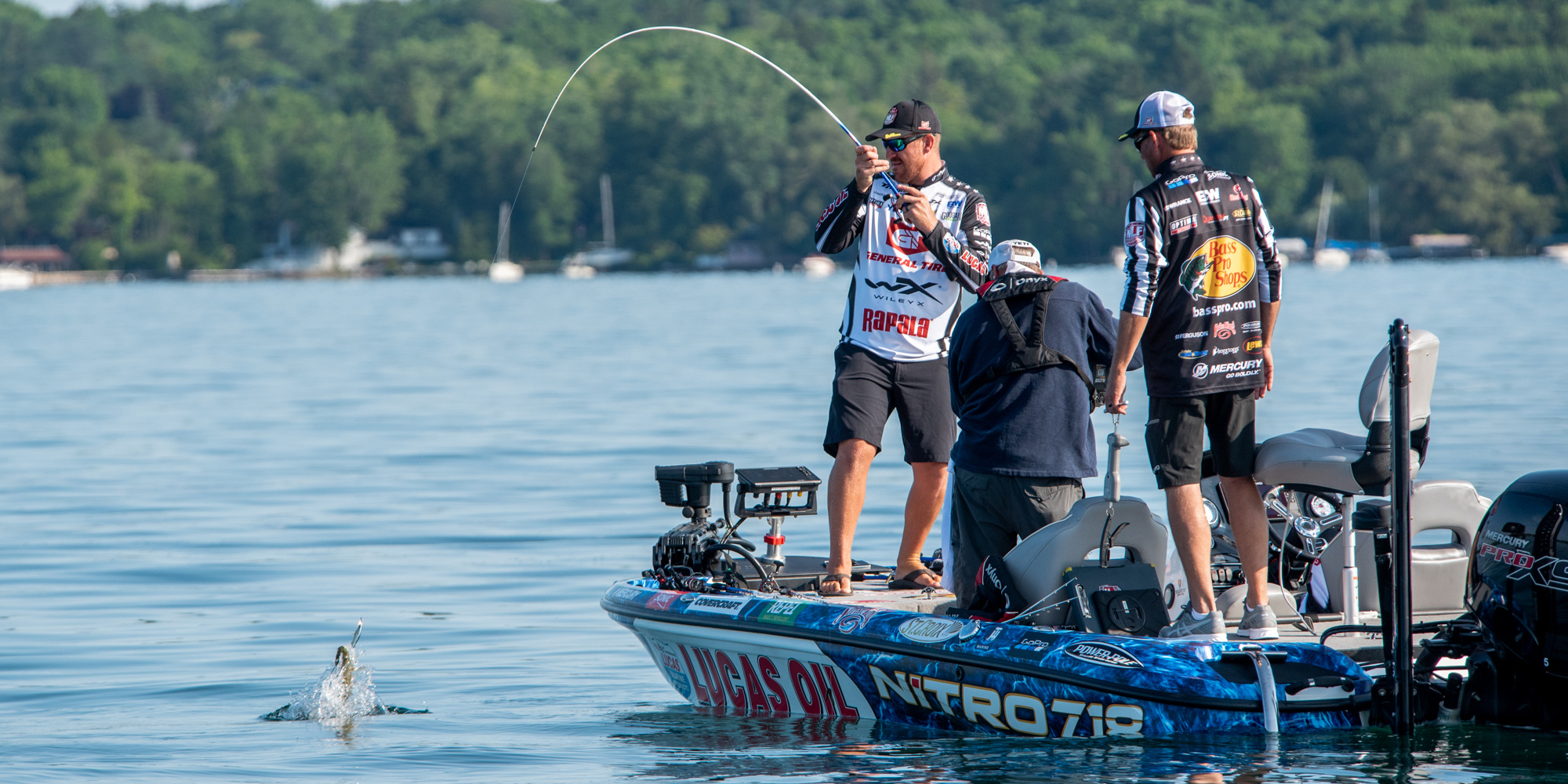 Jacob Wheeler was the first MLF pro to hit the Sudden Death Round 2 Target Weight just 12 minutes into the second period. Photo by Garrick Dixon

SYRACUSE, N.Y. – The Championship Round field for the 2020 Bass Pro Shops Heritage Cup Presented by Berkley is now set. Jacob Wheeler, Jacob Powroznik, Mark Rose and Terry Scroggins were the first four anglers to reach the 23-pound Target Weight in Sudden Death Round 2 to move on to the Championship Round.

Jacob Wheeler’s day ended somewhat quickly on Lake Skaneateles. The Tennessee angler put 13 bass for 21 pounds, 8 ounces on SCORETRACKER® by the end of Period 1, putting him just 1-8 away from 23 pounds. It didn’t take long for the Googan Baits pro to finish his round. Just 12 minutes into Period 2, Wheeler added two more scorable bass to push his total weight to 23-11, advancing him to yet another Championship Round for the five-time MLF event winner.

“I love coming to a new body of water and having to dissect it really quickly,” Wheeler said to MLF analyst Marty Stone after securing a Championship Round berth. “Running around and hitting high-percentage areas where I know I will get bit really suits my style of fishing. Experience has really helped me understand different lakes, rivers and reservoirs even if I’ve never been there before. That experience helped me out today.”

Powroznik Closes Out in Period 2

Just a couple of hours after Wheeler locked up his top spot, Powroznik cracked 23 pounds. The Virginia angler spent most of his day working shallow near boat docks and floating platforms, finding smallmouth that were hugging the shade on a sunny day. Powroznik landed 16 bass for 24-1, his biggest being a 2-11. Powroznik reaches the Championship Round in his first-ever MLF Cup event.

Mark Rose finished in third place behind Wheeler and Powroznik thanks to 13 bass for 24-11. Rose struggled to figure out a way to get the smallies to bite in Period 1, ending his morning with only three bass for 6-6. During his break between Periods 1 and 2, Rose made the switch to 6-pound test from 8-pound test line on his spinning rod. The Arkansas angler credited that strategic switch for getting him 9 bass for 14-14 in Period 2.

Rose ended his day on a high note with a 3-7 for his final catch of the round, pushing him easily over the 23-pound Target Weight.

The Top 4 anglers never changed from start to finish in Sudden Death Round 2. However, that doesn’t mean that Terry Scroggins didn’t feel any pressure from Todd Faircloth in the final moments.

Scroggins entered the final period needing less than 5 pounds to make it to 23 pounds. At that time, Faircloth was sitting in sixth place with 14-6, an impressive weight considering he laid a zero on the board in Period 1. With over an hour and a half remaining, Faircloth found himself just 3 pounds behind Scroggins for the fourth and final spot. Still, “Big Show” Scroggins only needed one scorable bass to make it to 23 pounds.

The eight pros bring us the Championship Round on Saturday, Mar. 21 at 2 p.m. ET on the Outdoor Channel.