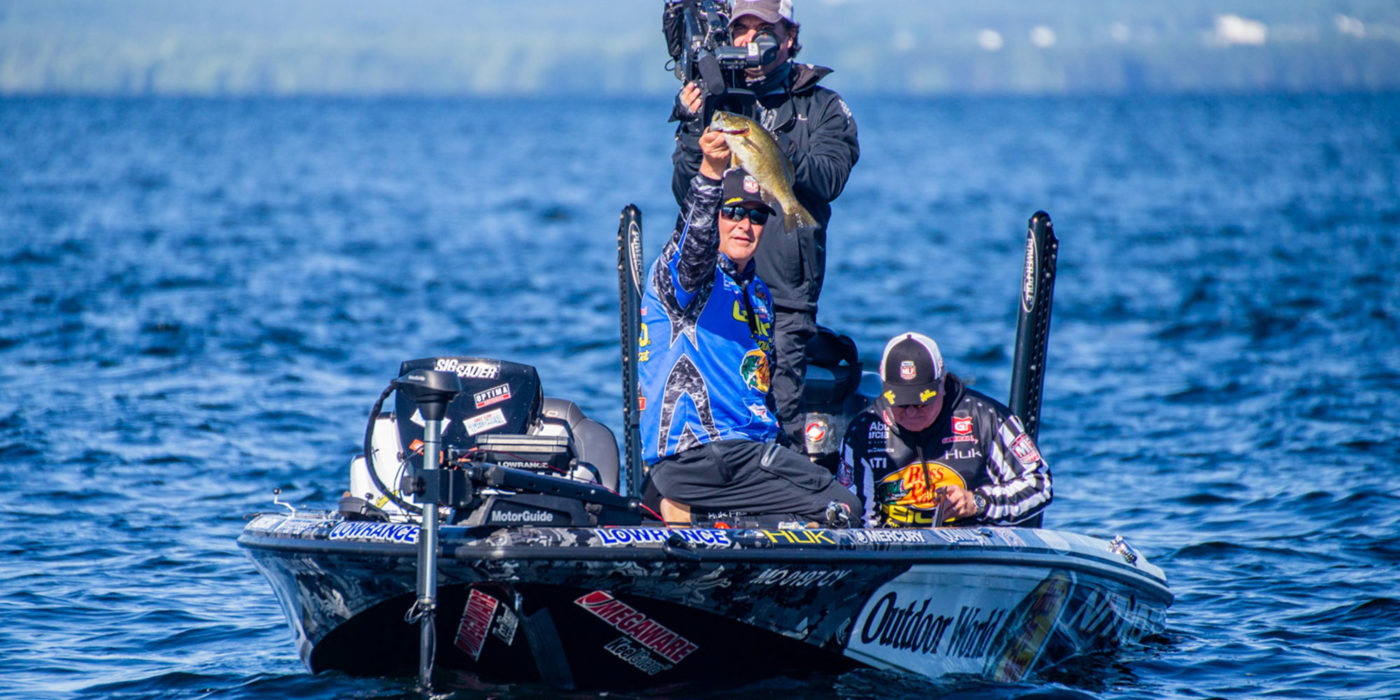 Brandon Coulter shows off his catch to the camera during his Sudden Death Round. Photo by Phoenix Moore

Major League Fishing gave six anglers three periods to catch 28 pounds of bass in Sudden Death Round 1 of the 2019 Challenge Select from Colchester, Vermont. However, Brandon Coulter needed only one period to secure his spot in the Championship Round.

A little over two hours into the first period, the Tennessee pro was able to blow by the 28-pound target weight. For Coulter, it was a change in strategy to fit the MLF format that made the biggest difference for him.

“It was actually the MLF format that helped me go out so early,” Coulter explained. “I caught a couple of fish that morning on a drop-shot, and in a traditional five-fish format, I would have stayed with that. I could have grinded out a fish every 45 minutes and would have been good in that format. However, I had caught a couple and some other guys had already started to pass me. So, I ditched the drop-shot and picked up a Carolina rig and the rest is history.”

The Change to a Carolina Rig

The switch to the Carolina rig paid off in a big way, helping Coulter catch a smallmouth on eight straight casts. Using a Zoom Green Pumpkin Speed Craw with a 7-foot-3 medium heavy 13 Fishing Omen Black rod, it was a quick day on Lake Champlain for Coulter.

“For some reason, smallmouth love that little craw,” Coulter said. “It’s something I have in my bag anytime I’m fishing for smallmouth. Plus, with my rod and reel, it’s just a great combination for smallmouth. I’ve always enjoyed fishing up north and I’ve always had more success up there.

“When it comes to fishing for smallmouth, they are structure-related and current-related fish. They school up and they really are the perfect off-shore fish for the MLF format. When given the option, I’m always going to try and find a group of smallmouth that are going to fire because you can make-up ground in a hurry when you do.”

While it may have looked like a pretty non-stressful day for the pro, Coulter said he didn’t feel completely safe until his MLF official gave him the word.

“The stress level never lowers when you’re fishing MLF,” Coulter revealed. “I’ve seen episodes where guys are only 2 pounds away from advancing and they never catch another fish. It was such a relief when I caught that last fish and moved on. I was happy to get off the water and go get some breakfast.”

Coulter is adding to his experience fishing the MLF format and is now an angler on the Bass Pro Tour. In his 12 years as a professional angler, Coulter has experienced the highs and lows the sport of fishing has to offer. Still, while in other sports athletes may use practice and film study as a way to improve their game, Coulter loves the lessons fishing teaches him when he is out on the water.

“The great thing about our sport, and especially with the MLF format, is that you get instant feedback on how you’re doing whether that’s good or bad,” Coulter said. “I would love to say that I would have stayed with the decision to change to a Carolina rig from a drop-shot every time, but without SCORETRACKER™ and knowing where I was in the standings, I wouldn’t have made that change.”