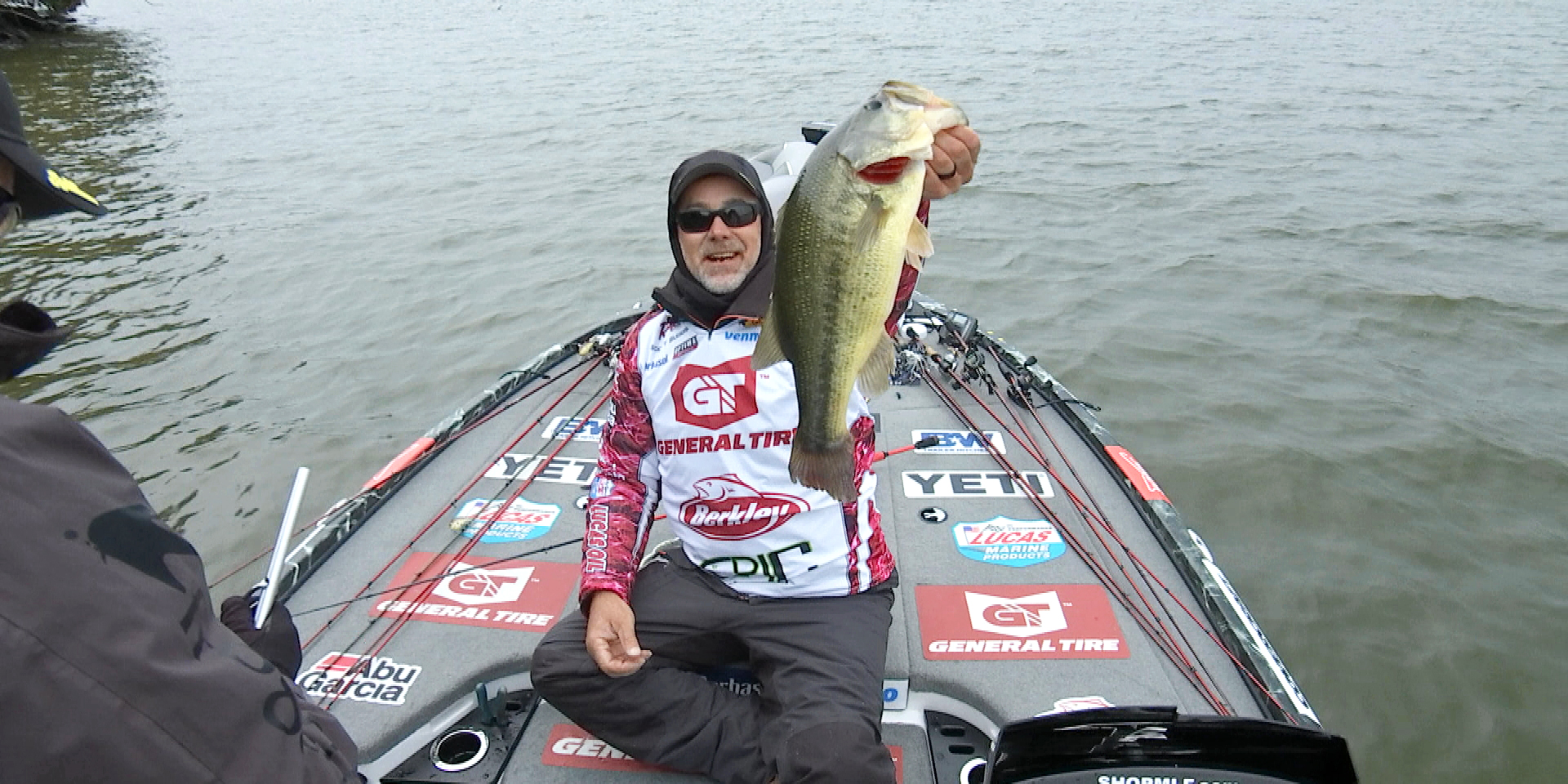 Scott Suggs was the first to reach the 17-pound Target Weight with the help of an early 6-pounder.

OSAGE BEACH, Mo. – Nine anglers set out on Lake of the Ozarks with a goal of being one of the first four pros to hit the 17-pound Target Weight. Only four are moving on to the Championship Round of the Wiley X Summit Cup Presented by B&W Trailer Hitches. Scott Suggs, Cody Meyer, Brent Ehrler and Andy Montgomery will join Takahiro Omori, Brandon Palaniuk, Bobby Lane and Michael Neal in the Championship Round.

A 17-pound Target Weight might seem like it would take awhile for anglers to hit on a chilly day in central Missouri. However, when you add a 6-pounder to your total weight just 45 minutes into the round, 17 pounds doesn’t seem that difficult.

Scott Suggs passed the 17-pound Target Weight first, the only angler to do so prior to Period 3. The Arkansas pro had eight bass for 19-2 on the day, but the one that sticks out the most is obviously that 6-pounder.

“I think the fish was shocked when he got hooked and I was shocked when I pulled him in the boat,” Suggs said. “To be able to get my momentum going early in the morning like that, I think it made a big difference in pushing me through to the Championship Round.”

Suggs remained in the lead for the entire round, never surrendering the top spot. The 2015 Summit Cup champion used a pair of baits to sprint to the Target Weight on a cloudy and cold day in the Ozarks.

“I threw a crankbait when the fish seemed like they were moving down the water column just a little bit and they didn’t want to bust on top,” Suggs explained. “I used a black buzzbait early in the morning when they were still really active. I caught them in the same type of area as the fish on the crankbait, the buzzbait was just better when I was closer to the bank.”

While Brent Ehrler got out to a solid start in Period 1 with four bass for 9-10, Cody Meyer and Andy Montgomery struggled mightily. With just one scorable bass between them for 1 pound through Period 1, Montgomery and Meyer had to make up ground in a hurry if they wanted to catch up to the rest of the field.

They both responded in Period 2, each of them catching six bass for more than 13 pounds. That run put them both behind Ehrler who remained steady with seven bass for 15-3.

Although Ehrler was closest to the Target Weight to begin Period 3, he was the last of the three pros to surpass 17 pounds. Ehrler was able to hold off a surging Edwin Evers for the final spot in the Top 4.

Edwin Evers, Jordan Lee, Brandon Coulter, Alton Jones Jr. and Wesley Strader failed to meet the 17-pound Target Weight. They will be heading home as they are eliminated from Summit Cup contention.

Evers and Lee will return to MLF Cup action for the 2020 General Tire World Championship.

Brent Ehrler, Bobby Lane, Cody Meyer, Andy Montgomery, Michael Neal, Takahiro Omori, Brandon Palaniuk and Scott Suggs will compete to be the last man standing for the 2020 Summit Cup in the Championship Round.

The eight pros bring us the Championship Round on Saturday, June 20 at 2 p.m. ET on the Outdoor Channel.