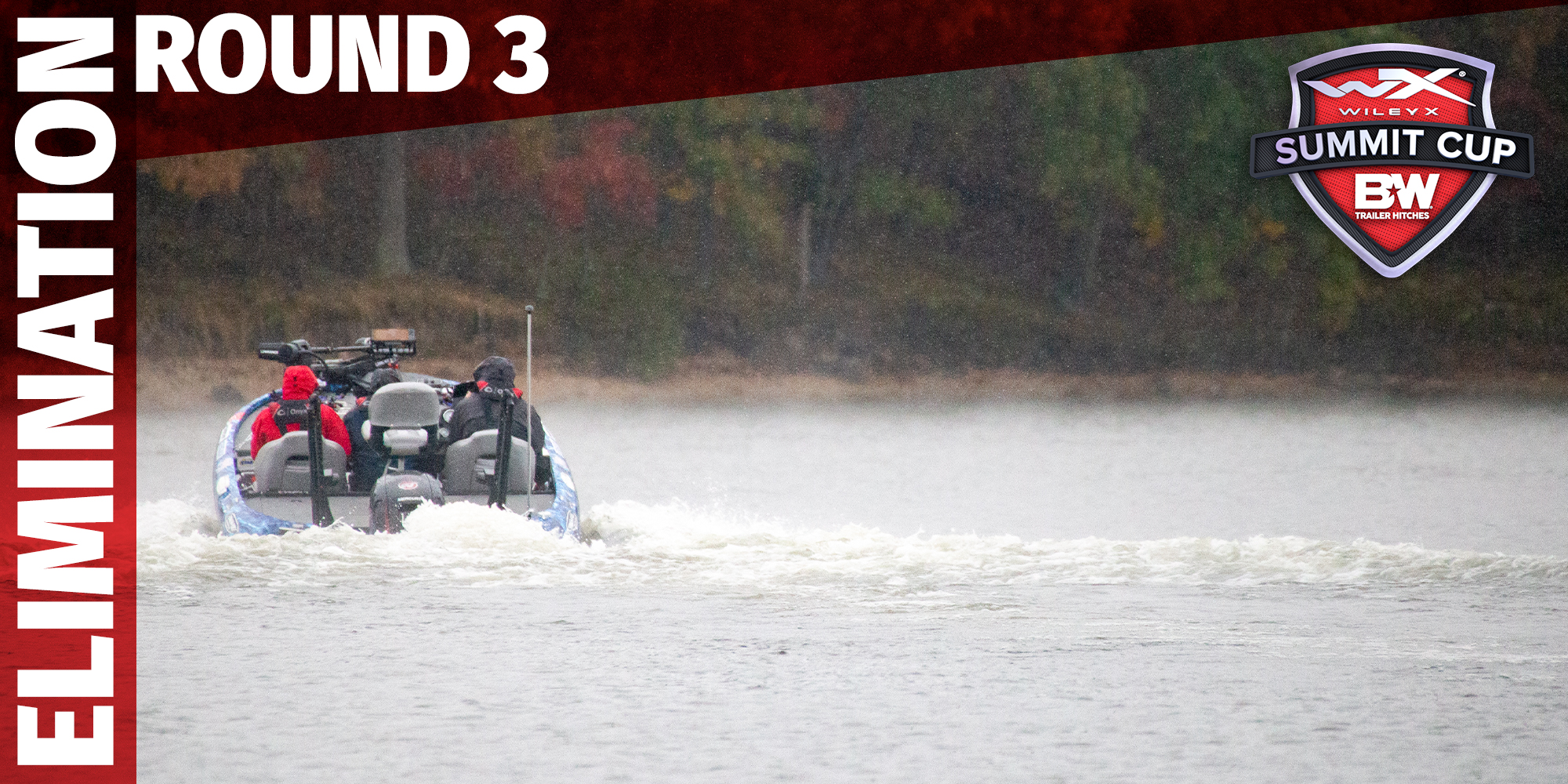 The final group of 10 MLF pros hit the water on Lake of the Ozarks for a wet October day of competition. Photo by Phoenix Moore

OSAGE BEACH, Mo. – Only six spots remain in the Sudden Death Rounds and the 10 anglers competing in Elimination Round 3 of the 2020 Wiley X Summit Cup Presented by B&W Trailer Hitches will battle for the right to move on. The pros will be fishing in the Gravois Creek area on Lake of the Ozarks in central Missouri for three periods, and only the Top 6 anglers on SCORETRACKER® at the end of the day will be advancing.

Lake of the Ozarks Breakdown

A chill was in the air when the 2020 Summit Cup was filmed during October 2019. Fall arrives quickly in central Missouri, and that’s something the anglers will have to account for during their time in Gravois Creek.

“This is a true fall tournament,” said MLF analyst Marty Stone. “The leaves are changing, the days are getting shorter, and the water temperature is starting to drop. The anglers will realize this zone is filled with visible targets like boat docks, marinas and retaining walls. Rock walls, chunk rock and riprap are also something the anglers will key on.”

With 102 miles of shoreline and over 6,200 surface acres of water, there’s plenty of space for the anglers to spread out and find a productive area. There are the structure and cover that Stone just mentioned, but the winning formula in the previous Elimination Rounds shows us what’s the most lucrative option for the anglers.

“In the previous two rounds, it has been about the bite in the backs of creeks,” Stone explained. “The water temperatures back there are in the mid to low-60s. That has all of the shad migrating to the back of the pocket. These anglers are going to have to find a small area with a lot of shad in a short amount of time if they want to be successful.”

All of the pros competing in Elimination Round 3 have MLF Cup experience this season. Headlined by 2019 Points and REDCREST Champion Edwin Evers, the 10-angler field is stacked.

Two General Tire World Champions are in the running, Bobby Lane (2017) and Jacob Wheeler (2019). Both are entering their third Cup event of the season.

Jordan Lee and Andy Morgan are both in their third Cup event of 2019 after winning a stage during the 2019 Bass Pro Tour Season.

Evers is one of two pros that has qualified for all four Cup events, the other being Dustin Connell. Connell has yet to win an MLF event in his first year of the new format.

Casey Ashley, Adrian Avena, Brent Ehrler, and Justin Lucas round out the field of 10.

Lee, Wheeler, Evers and Ehrler have already qualified for 2020 General Tire World Championship. There are still five spots up for grabs that will be filled during the Summit Cup. The Top 3 finishers in the Championship Round automatically qualify for the World Championship, along with the Top 2 point-earners in MLF Cup Points.

The 10 competing anglers bring us Elimination Round 3 on Saturday, May 30 at 2 p.m. ET on Outdoor Channel.