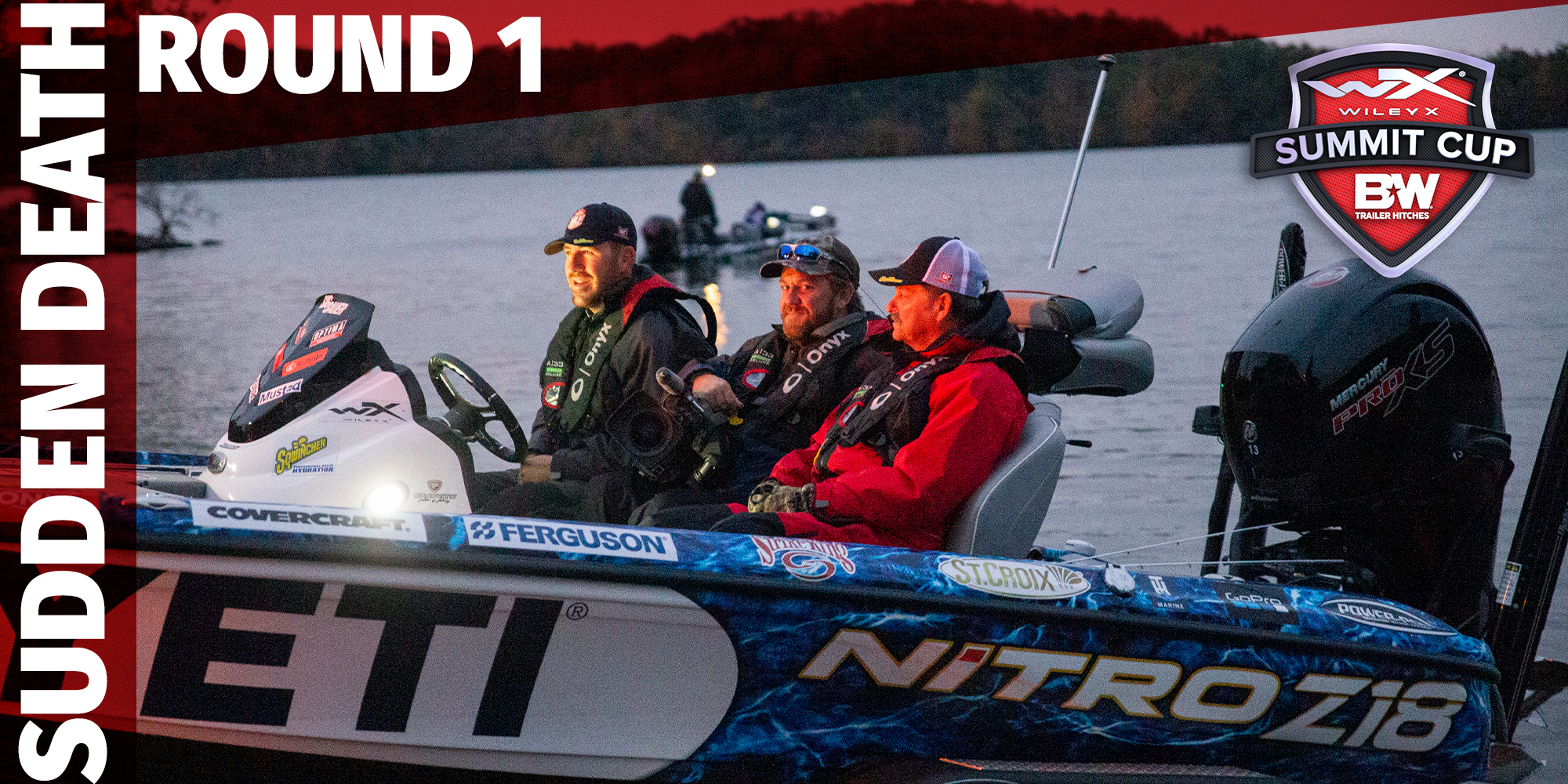 Sudden Death Round 1 begins on Lake of the Ozarks with a 17-pound Target Weight. Photo by Phoenix Moore

OSAGE BEACH, Mo. – It’s a race to be one of the first four anglers to 17 pounds in Sudden Death Round 1 of the Wiley X Summit Cup Presented by B&W Trailer Hitches. The nine pros in Sudden Death Round 1 will be fishing in the Grand Glaize Creek arm of Lake of the Ozarks, with 68 miles of shoreline and over 3,500 surface acres to explore. However, only the first four pros to exceed 17 pounds of bass will be moving on to the Championship Round.

The Elimination Rounds were held in the Gravois Creek area of Lake of the Ozarks, but anywhere is possible in Major League Fishing, so the anglers are in for a change of scenery. Casey Ashley, Randy Howell, Bobby Lane, Jared Lintner, Michael Neal, Takahiro Omori, Cliff Pace, Brandon Palaniuk, and Jacob Wheeler will be fishing in the Grand Glaize Creek arm, an area filled with targets according to MLF analyst Marty Stone.

“This zone has docks, marinas, individual boat ramps, retaining walls, and marina walls,” Stone listed. “There will also be washed-in wood cover in the backs of some of the creeks. However, there’s not quite the abundance of boat docks and marinas we saw in the Elimination Rounds.”

However, what this zone lacks in manmade cover, it makes up for in natural structure.

“What this creek does have a lot of is bluff walls and bluff ends,” Stone analyzed. “There’s also an area in this part of the lake called ‘PB2.’ That’s where a lot of the regional and national tournaments hold their weigh-ins, and there are a ton of big fish released in that area. These pros will have to stumble upon that PB2 area if they want to catch those released fish from previous tournaments.”

Omori and Lintner enter Sudden Death Round 1 as the winners of their respective Elimination Rounds. We saw Lintner land 33 bass for 58 pounds in Gravois Creek in Elimination Round 2 and Omori haul in 18 bass for 27-14.

Two General Tire World Champions—Jacob Wheeler (2019) and Bobby Lane (2017)—are in the field of nine as well. Wheeler has already earned a berth in the 2020 World Championship, while Lane needs a Top 3 finish in the Summit Cup to qualify.

Neal has already qualified for the World Championship thanks to a second-place finish to Jeff Sprague in the Challenge Cup. Neal has competed in all four Cup events this season, and will be fishing his second Sudden Death Round of the year. He was eliminated in the Elimination Round during the Patriot Cup.

Pace qualified for the Summit Cup thanks to his 2019 Bass Pro Tour Stage Eight championship at Lake Winnebago in Wisconsin. This is his second Cup event of the season.

Howell, Ashley and Palaniuk round out the field of nine.

The nine competing anglers bring us Sudden Death Round 1 on Saturday, June 6 at 2 p.m. ET on Outdoor Channel.