Championship Round Field Set after Battle on Lake Bruin 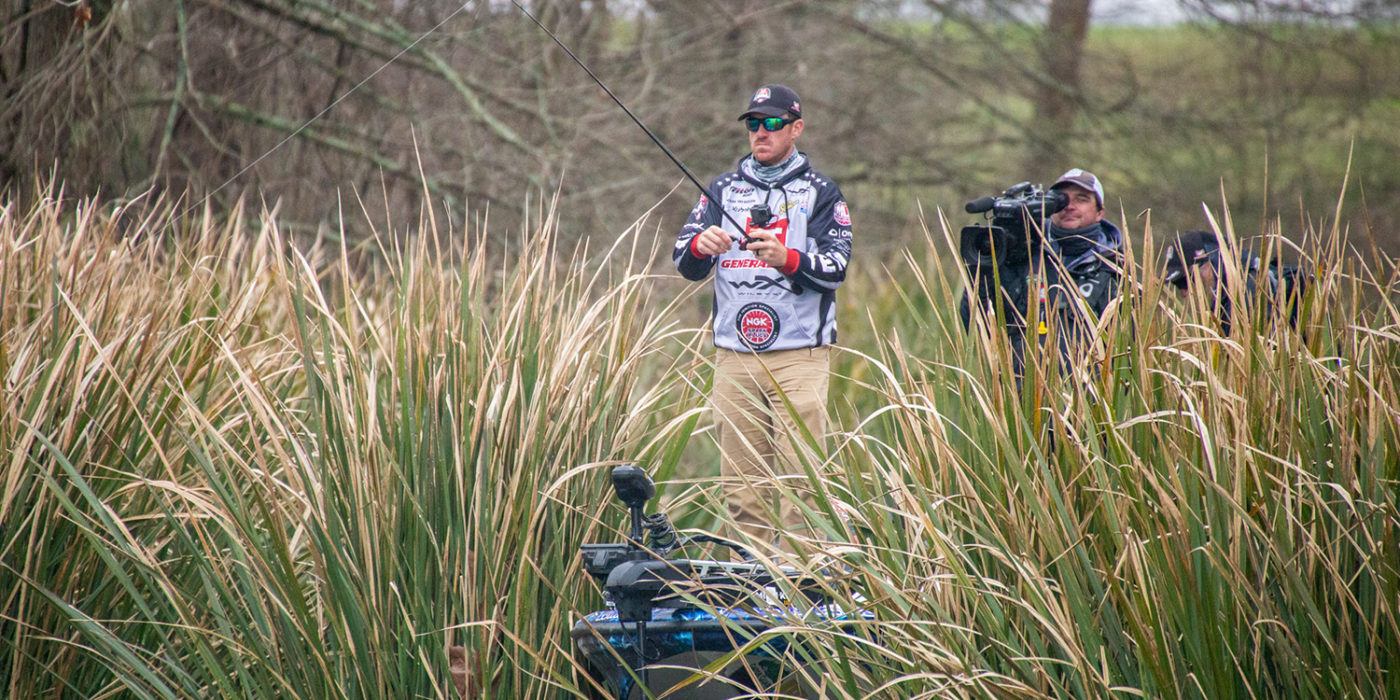 Jacob Wheeler used a strong second period to advance to the Championship Round of the General Tire World Championship. Photo by Phoenix Moore

VIDALIA, La. – The six anglers competing in the Sudden Death Round of the General Tire World Championship were given a curveball, and four anglers knocked that curveball out of the park. Brent Chapman, Mike Iaconelli, Gary Klein, Aaron Martens, Takahiro Omori and Jacob Wheeler all returned to Lake Bruin, the site of their respective Shotgun Rounds, for the Sudden Death Round. The Target Weight was set to 18 pounds and the first four anglers to reach the mark would be moving on to the Championship Round.

Even though these pros had seen Lake Bruin before, they had some trouble figuring out how to get bites in Period 1. Mike Iaconelli ended the period in first place with 5 pounds, 14 ounces, but he was only able to get his bites in the final 45 minutes. Ike found success flipping areas that had a combination of sea walls and wood from broken up Cypress trees.

Jacob Wheeler began Period 2 in fourth place on SCORETRACKER® and needing to catch up to the rest of the field.

“We came back to a lake that was pretty tough in the Shotgun Round,” Wheeler said. “I didn’t know what to expect, I repeated some of the places I hit in the Shotgun Round and I didn’t get any bites. At that point, I just put my head down and tried to figure out something new.”

The Tennessee pro decided to pick up a vibrating jig to try and get some quality bites. That decision proved to be the difference as Wheeler was able to land seven bass for 15-15 to push his total weight to 19-5, becoming the first angler to secure a spot in the Championship Round.

“I knew making it to the World Championship and competing against this group of guys was going to be very difficult to make it to the Championship Round,” Wheeler explained. “These guys are here for a reason and today was just my day.”

After the second period, the remaining five anglers were fighting for just three spots with one period left. Aaron Martens was the next angler to punch his ticket to the Championship Round thanks in large part to an interesting choice.

Martens picked up a spinning rod and was casting a worm near the multiple boat docks along the shoreline of Lake Bruin. Martens was able to grab 11-6 in the final period to wrestle with Wheeler in the Championship Round.

Iaconelli was quick to follow Martens above the 18-pound threshold with a 2-2 largemouth that kept the New Jersey pro’s hopes alive for a World Championship.

While no one else was able to crack 18 pounds in total weight, Takahiro Omori reeled in 17-7 on the day to give him the final spot in the Championship Round. Brent Chapman and Gary Klein were eliminated from competition as both were unable to catch more than 7 pounds in the round.

The final four anglers are set with Mike Iaconelli, Aaron Martens, Takahiro Omori and Jacob Wheeler competing for the 2019 General Tire World Championship. Only one pro will walk away with the title and trophy Saturday at a new time of 1 p.m. ET on CBS.