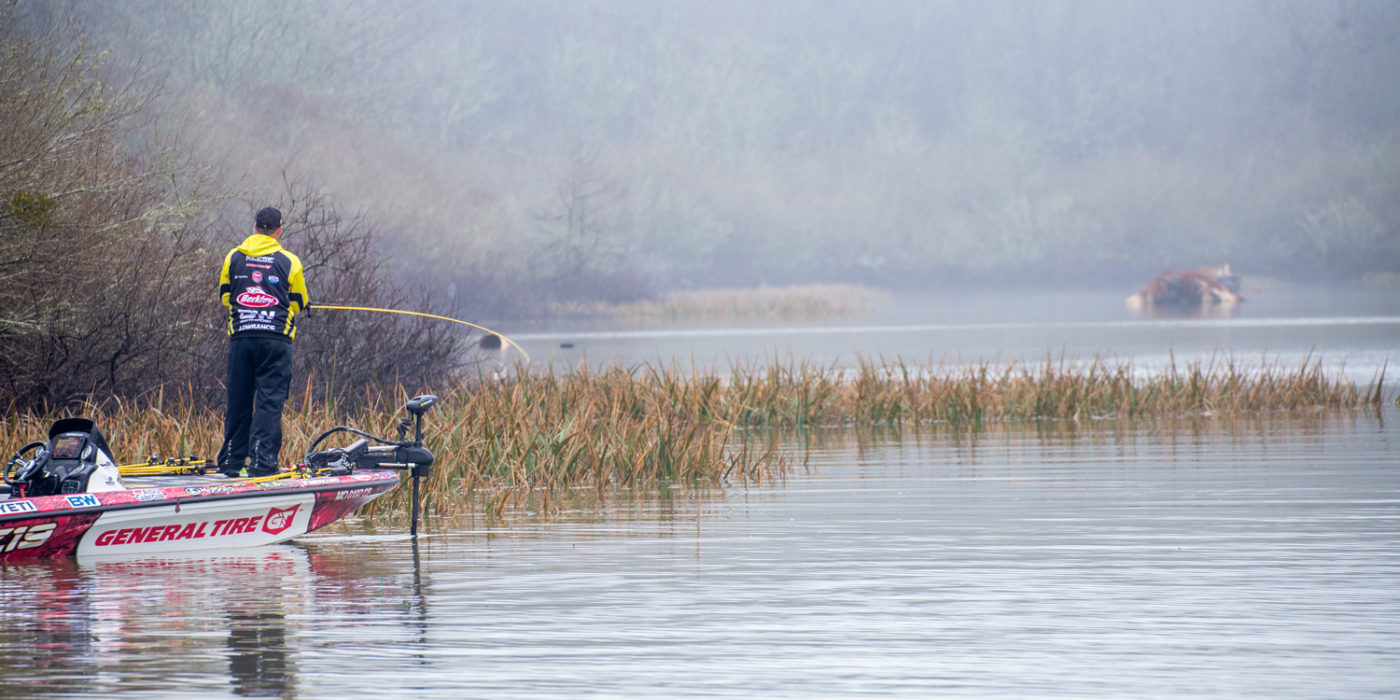 Skeet Reese works to figure out the pattern in Elimination Round 2. Photo by Phoenix Moore

VIDALIA, La. – Although the five anglers competing in the final Elimination Round of the 2019 General Tire World Championship Presented by Bass Pro Shops (2 p.m. ET Saturday on CBS Television Network) have nearly eight hours of fishing time to earn one of the two spots (and automatic advancement to the semi-final round), MLF pro Mike Iaconelli summed it up best as he prepared to face off against Edwin Evers, Brent Ehrler, Skeet Reese and Jacob Wheeler.

“You have to find that one bite that tells you the pattern,” Iaconelli said the night before competition on the Black River-Cocordrie Complex near tournament headquarters in Vidalia. “Just that one little thing that tells you ‘Aha! This is the answer!’ It’s a hard thing to do when you’re fishing against four other guys and the clock, but it’s what I live for. It’s what I fish for.”

For Iaconelli and the four other competitors, the challenge on the waters of Black River Lake, Cocodrie Lake and Workinger Bayou – the official competition waters for the round – is that it’s a fishery in a state of dramatic change.

Change in the form of fluctuating water levels, stained water, and Mississippi River Valley largemouth that haven’t known whether they’re coming or going for several weeks.

As competition begins on this Elimination Round, water levels have dropped nearly 7 feet from two weeks prior, so the location of cover in Black River and Cocodrie has changed dramatically. Grass and floating docks are still in play, but certain pieces of outside cover (cypress trees most notably) are less viable then they were when the MLF pros were last here in May of 2018.

In addition, the water is still extremely dirty, but it’s cleared up enough in small pockets to provide both fish and the five anglers some areas to focus on.

“These five anglers have three areas to choose from in Black River Lake, Workinger Bayou and Cocodrie Lake, but all three are in a state of change,” confirmed MLF analyst Marty Stone. “There’s a ton of stain everywhere they stop, but some of it is clearing enough to be fishable.”

Perhaps more importantly, the nighttime lows have climbed into the 50s and maintained there, producing enough of a warmup that more of the largemouth swimming in these waters will likely have moved up to pursue baitfish that are more prone to stay shallow than they had been just a few days prior, when nighttime lows dipped into the low 40s.

“Baitfish are moving up and not leaving,” Stone confirmed. “That should accelerate the bite and give these anglers more (feeding fish) to choose from.”

It’ll be hard to bet against Wheeler. The Tennessee pro weighed in 17 pounds, 9 ounces in the Shotgun Round to enter the Elimination Round with a 4-pound cushion over Edwin Evers (13-9) and more than 6 pounds on Ehrler (11-6). Wheeler is a notoriously quick study in adjusting to changing conditions: he dominated the Championship Round of the 2019 Challenge Cup in North Carolina under similar conditions by over 20 pounds.

“You just have to figure it out as quick as you can,” Wheeler echoed Iaconelli’s comments. “I feel like I’m pretty good at identifying conditions fast, but there’s no such thing as ‘fast enough’ in this competition.”