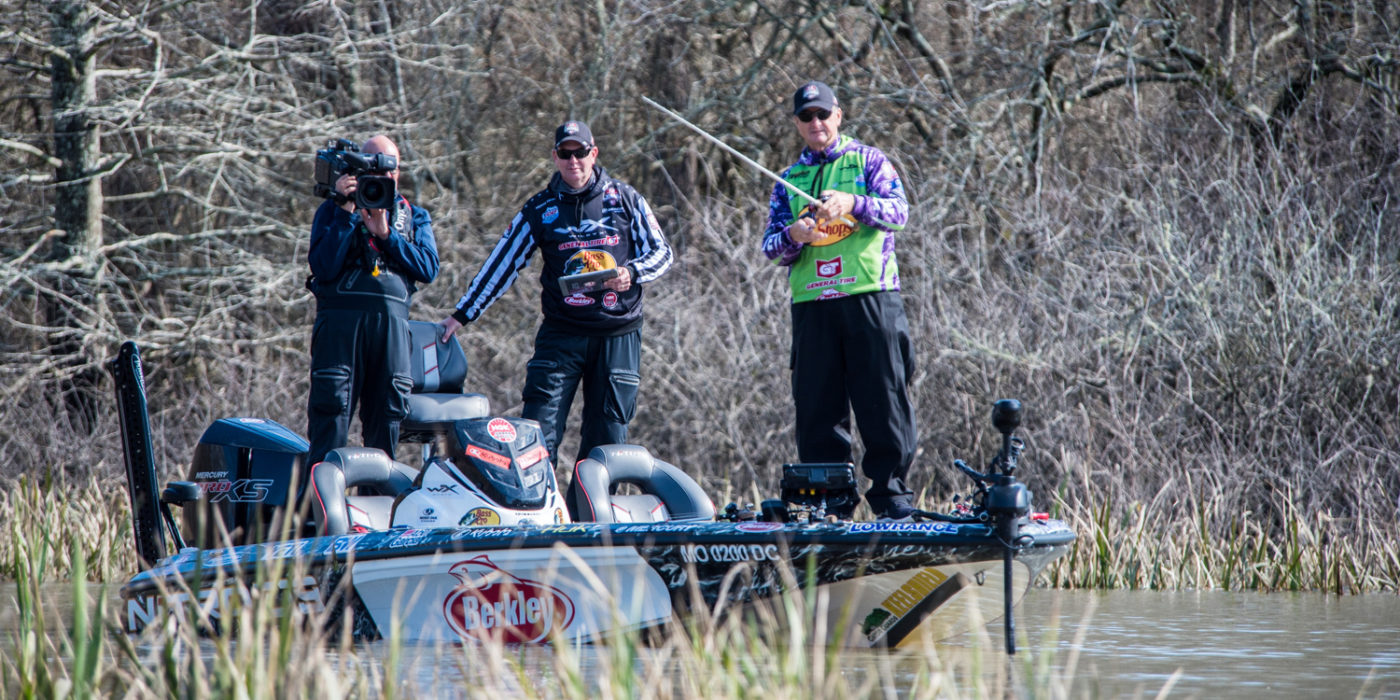 Gary Klein wrapped up Elimination Round 1 with a second-place finish, moving on to Sudden Death. Photo by Garrick Dixon

VIDALIA, La. – Five pros took to the waters of the Black River and Cocodrie Lake for Elimination Round 1 of the General Tire World Championship and only two are moving on to the Sudden Death Round. Aaron Martens, Bobby Lane, Gary Klein, Ish Monroe and Andy Montgomery carried their weight over from Shotgun Round 1 with hopes of being one of the top two pros at the end of their Elimination Round.

Aaron Martens entered Elimination Round 1 on top of the four other pros thanks to his 21-pound, 6-ounce day in Shotgun Round 1. Although Martens didn’t put up enough weight to get past Takahiro Omori in his Shotgun Round, Martens was able to easily find his way into the Sudden Death Round.

The California pro had a rough start to his morning on Cocodrie Lake as he was unable to put a scoreable bass on SCORETRACKER® in the first period. Martens made some key adjustments with his spinnerbait before the start of Period 2 that led him to catch seven bass for 16-3 in a span of 90 minutes.

Once the third period rolled around, Martens fired the deciding blow, a 3-6 largemouth that was good enough for the Berkley Big Bass of the day. Martens finished his two rounds with a combined total of 23 bass for 47-7 as he moves on to meet Takahiro Omori and Brent Chapman in the Sudden Death Round.

While Martens maintained his comfortable lead, three pros were battling for the final spot in the top two. Bobby Lane entered the final period in second place but was having a painfully slow day with only one bass for 1-8 through two periods. Andy Montgomery took advantage of Lane’s misfortune by jumping ahead early in the period.

The pressure was not too much for Lane to handle, as he immediately answered Montgomery’s catch with a scoreable bass of his own. All the while, Gary Klein sat in fourth place just searching for something to go right. The Texas pro hadn’t caught a scoreable bass in more than three hours and his chances of moving on were beginning to look bleak.

Then, the bite that changed it all. Klein hooked up with a 3-2 largemouth using a chatterbait to inch closer to Montgomery and Lane. But Klein was far from done. In less than 30 minutes, Klein was able to boat seven bass for 12-6 and wedge himself above Bobby Lane by 3-10.

Martens and Klein will both move on to the Sudden Death Round and join Takahiro Omori and Brent Chapman as they wait for two more pros to qualify. The five anglers competing in Elimination Round 2 will carry over their weight from Shotgun Round 2 and only the top two will advance to Sudden Death.