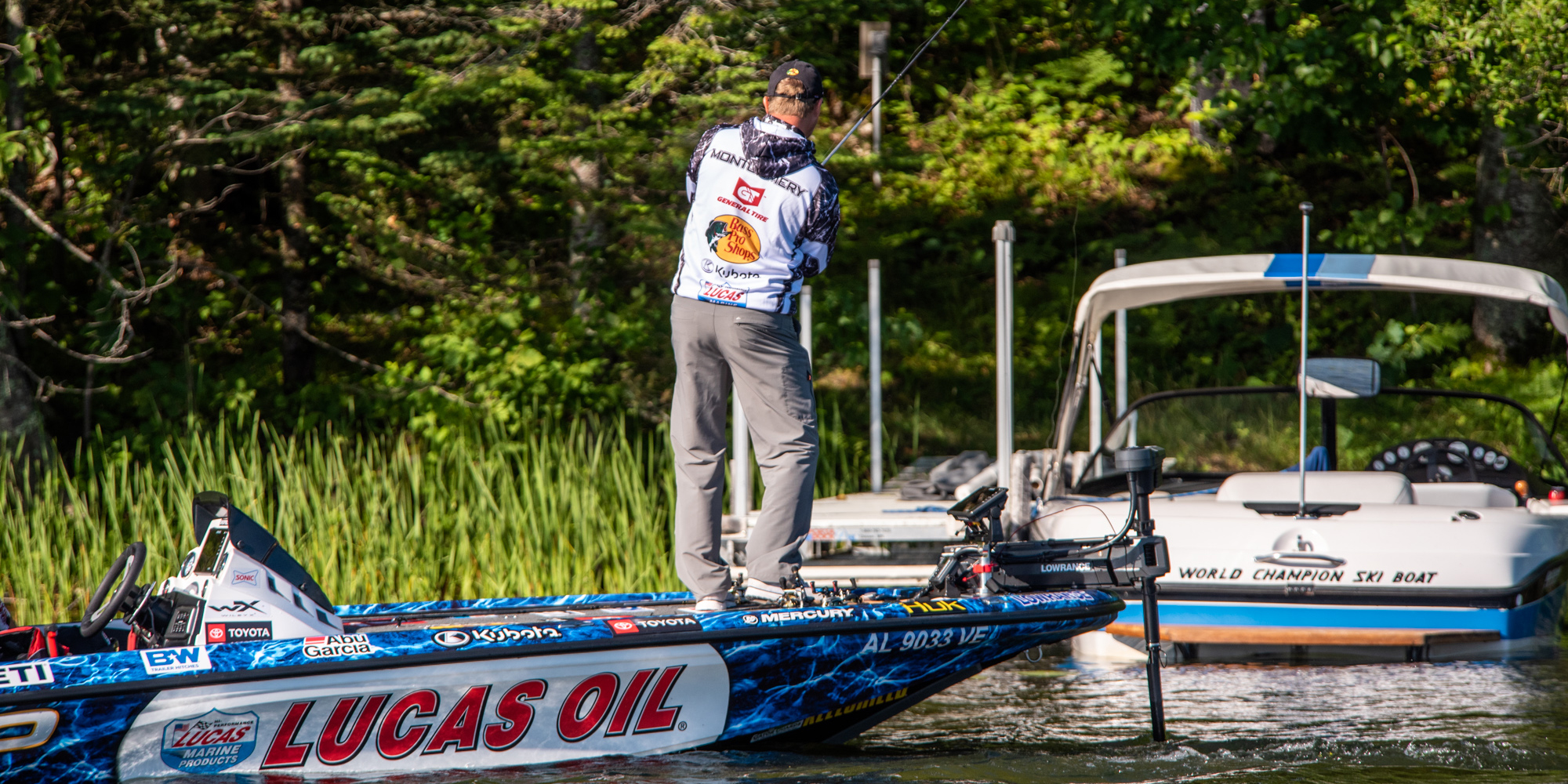 Andy Montgomery claimed the day during Shotgun Round 1 of the 2020 General Tire World Championship. Photo by Garrick Dixon

Andy Montgomery caught 19 bass totaling 42 pounds, 6 ounces to win the opening Shotgun Round of competition at the General Tire World Championship in Grand Rapids, Minnesota. For the win, Montgomery now advances directly into the Sudden Death Round of competition in the six-day championship bass tournament that showcases 16 of the best bass anglers from around the world competing for a top prize of $100,000.

The opening day of competition on Discovery showcased the eight competing anglers in Shotgun Round 1 fishing on Northern Minnesota’s Lake Wabana. Montgomery had a big third-period rally, catching 10 bass for 23-12 in the final period to surpass Greg Vinson and Jordan Lee and earn the win by a narrow 1-pound, 4-ounce margin.

“For once, on a tournament day, everything played out just like I hoped it would,” Montgomery said in his post-game press conference. “I wanted to put the heat on the docks early before others got a chance to fish them. I was able to do that and caught all of the largemouth that I could. I also knew coming into this that I was going to have to catch smallmouth somehow. I went a little while before I caught one, but once I finally did my confidence went through the roof because I caught it shallow, and it was a pattern that I could run across the lake.

“I mainly threw a lot of moving baits,” Montgomery continued. “I thought I’d maybe catch them deep on a drop-shot rig, but the wind took that away. So, I bounced back and forth throughout the day – from the docks out to the underwater islands, then back to the docks, then back to the islands. Timing was extremely important, and it was really good for me today.”

Montgomery said that he caught his largemouth on the docks with a Strike King Tour Grade Skipping Jig with a matching Rage Bug trailer. When fishing for smallmouth on the offshore islands, he threw a small Strike King Thunder Cricket vibrating jig and an unnamed swimbait.

“The third period was very important, and I felt like I had a really good gameplan,” Montgomery said. “I had the smallmouth pattern established, but I also had some docks in my mind that I had watched another competitor fish, but I felt like I could still catch some fish off of them. So, I re-fished those and caught a few key fish and then when they were done I didn’t try to force it – I went back offshore to the smallmouth.”

Montgomery now becomes the first angler to advance directly into the Sudden Death Round, a feat that he is proud of, but according to him there is still a lot of work left to be done.

The standings after Saturday’s airing of the Shotgun Round 1 are:

Overall, there were 94 bass weighing 204 pounds, 4 ounces caught by the eight pros on day one of competition on Wabana Lake.

In MLF General Tire World Championship competition, the full field of 16 pro anglers is split into two groups of eight. The first group competes in a Shotgun Round 1 on day one, the second group on day two for Shotgun Round 2, with the winners of each day advancing directly to the Sudden Death Round. The remaining seven anglers from each group carry their total weight on to the Elimination Round competition. The three anglers from each group with the highest cumulative two-day weight will advance to the Sudden Death Round – eight anglers total.