Omori Wins Shotgun Round 1, Advances to Sudden Death Round 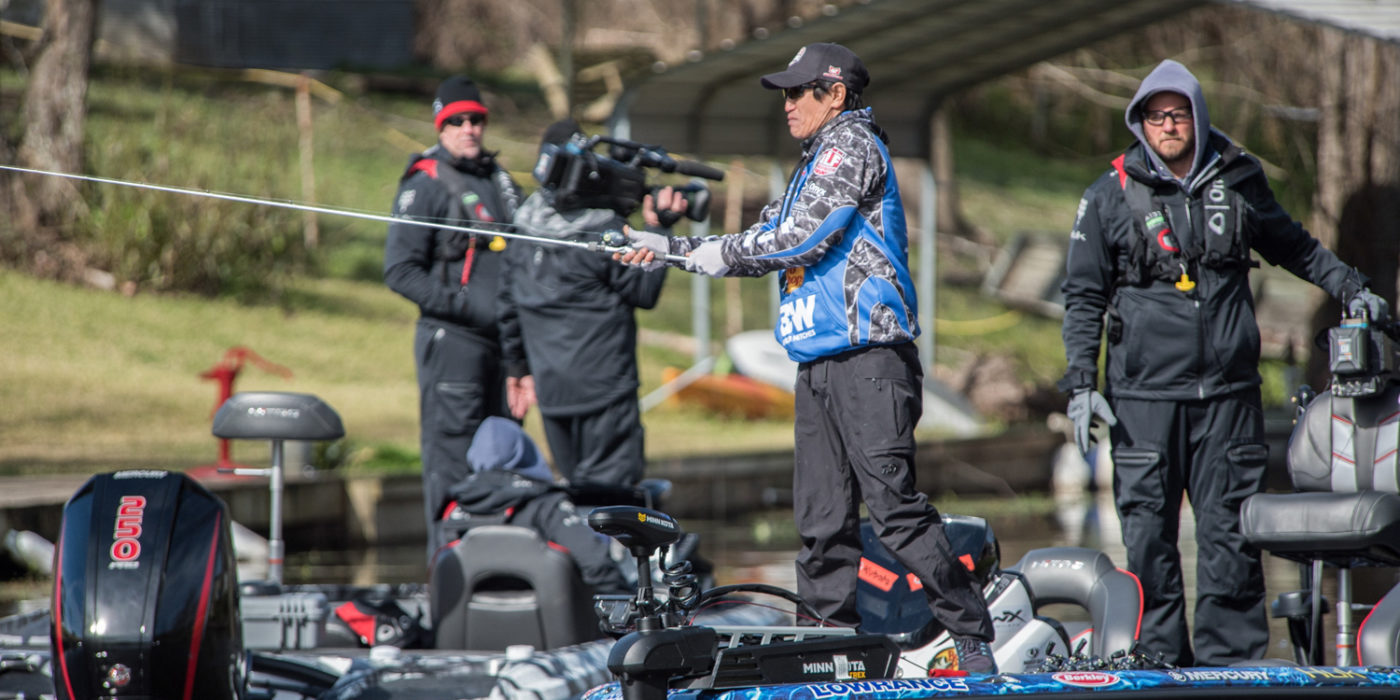 Takahiro Omori claimed the win in Shotgun Round 1 of the General Tire World Championship. Photo by Garrick Dixon

VIDALIA, La. – Six MLF pros hit the water in Shotgun Round 1 to open up the 2019 General Tire World Championship Presented by Bass Pro Shops on Lake Bruin in Vidalia, Louisiana. The winner of the round earned the right to move on to the Sudden Death Round and skip the Elimination Round. That honor was taken by Takahiro Omori, who caught nine bass for 23 pounds to edge out Aaron Martens by 1-10.

After one period on the water, Bobby Lane led all competitors with 9-8 as he was flipping through cattails along the bank. Omori spent the majority of his first period in canals throughout the lake but was only able to catch two bass for 3-13. When the second period rolled around, the Daiwa pro knew he had to make a change to where he was fishing.

“I kind of knew it was going to be tough all day,” Omori explained. “I made a move from the canals to the main lake, and that’s where it all happened for me.”

Omori’s move paid off big for him in Period 2 as he was able to catch nearly 14 pounds of fish on a spinnerbait. The move from a jig to a spinnerbait was one of the key decisions for the Ranger pro on the day.

“It’s the springtime, so the fish seemed to be acting more like they wanted a spinnerbait bite instead of a jig,” Omori detailed. “The water seems a little higher than normal, so that puts the fish a little more shallow than normal.”

Although he had a productive Period 2, Omori was still chasing another angler. Instead of Bobby Lane, it was Aaron Martens who Omori had to track down to secure his first-place finish. Martens led Omori by 2-1 heading into the final period and Martens seemed to be hitting his groove—nine bass for 16-4—in Period 2.

With time winding down in the round, Omori trailed Martens by 10 ounces. Omori’s MLF official gave him a five-minute warning until the end of the period, and shortly after, he hooked up with a 2-pound, 4-ounce bass thanks to his trusty spinnerbait. The fish hit SCORETRACKER® with four minutes remaining in the round, giving Omori the lead and the win.

While Omori punched his ticket straight to the Sudden Death Round, the five other competing anglers must advance through Elimination Round 1 for the right to take on Omori. The five remaining pros will carry their weight from Shotgun Round 1 with them into their Elimination Round. Here is where the remaining anglers will begin:

The remaining five anglers will compete in Elimination Round 1 of the 2019 Major League Fishing General Tire World Championship Presented by Bass Pro Shops airing Saturday, July 6. The General Tire World Championship rounds air every Saturday for six weeks (starting June 22) at 2 p.m. ET. Each episode of the championship will be rebroadcast on CBS Sports Network every Saturday at 1 p.m., starting June 29. Check your local listings and with your local CBS affiliate.