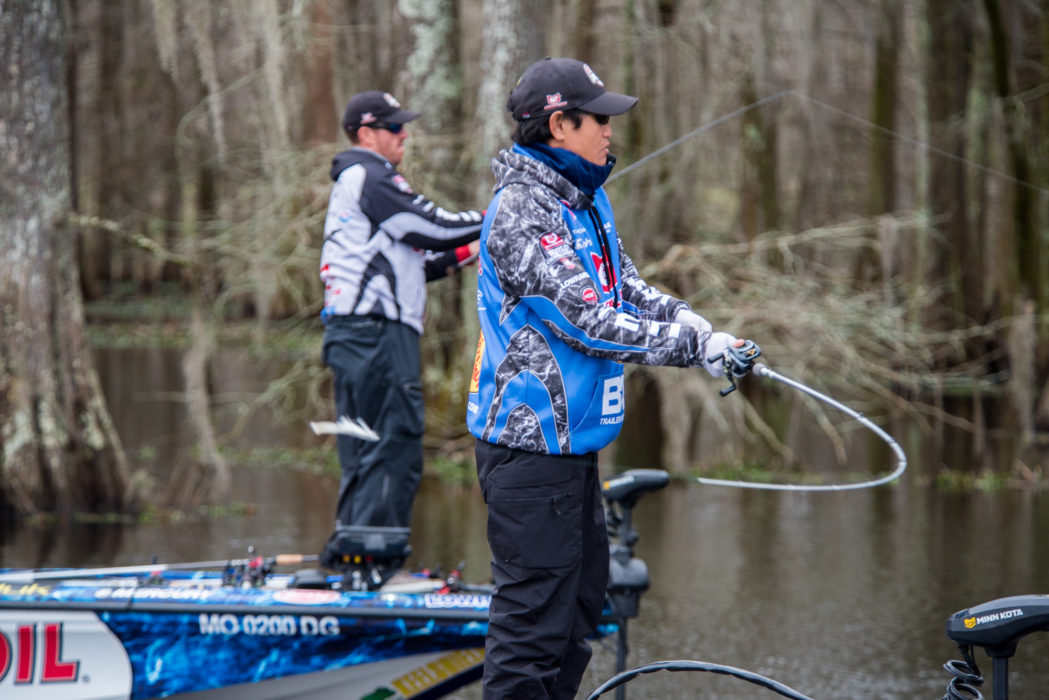 Takahiro Omori and Jacob Wheeler will be joined in the Championship Round by Aaron Martens and Mike Iaconelli. Photo by Garrick Dixon

VIDALIA, La. – In most competitions, a 1-in-4 chance to claim a major championship represents excellent odds. But as he surveyed the rest of the four-man field preparing to fish the Championship Round of the 2019 General Tire World Championship presented by Bass Pro Shops, Aaron Martens viewed those odds a little differently.

The anglers in question – Jacob Wheeler, Takahiro Omori and Mike Iaconelli (along with Martens) – indeed compose one of the most fearsome foursomes ever assembled in the history of bass fishing to compete for a championship trophy.

Mike Iaconelli – Competing in his second consecutive World Championship final – he finished second to Greg Hackney in 2018 – Iaconelli is the only angler in history to win the BASS Federation Championship, Bassmaster Classic (2003) and Bassmaster Elite Series Angler of the Year title. He’s had plenty of success in the MLF “every scoreable bass counts” format, too: Iaconelli won the 2017 and 2019 Summit Cup events.

Takahiro Omori – One of the original group of 25 anglers who competed in the first-ever MLF event on Lake Amistad in 2011, Omori is the only Japanese angler to ever win the Bassmaster Classic (2004). He’s also enjoyed success in the MLF format, winning the 2018 Summit Cup on Lake Wylie, North Carolina.

Jacob Wheeler – Wheeler is the youngest angler to ever win the Forrest Wood Cup (he was 21 when he won it in 2012), and the only angler in history to win the first two Elite Series events he competed in. Even more notable for the Championship Round: the Tennessee pro has the highest winning percentage in MLF history, and had won nine of the previous 12 Shotgun and Elimination rounds he competed in prior to the 2019 World Championship.

Aaron Martens – Martens is a three-time Elite Series AOY, and one of the Top 10 money-winners in the history of professional bass fishing. He’s one of a small handful of anglers who have won 10 or more tour-level events (including a win in the 2019 Bass Pro Tour Stage Six on Table Rock Lake, Missouri).

The final battle for the Johnny Morris Award will be played out on a fishery that the World Championship pros have yet to see: Lake St. John, a 2,200-acre Mississippi River oxbow lake located 15 miles due north of the host city of Vidalia, Louisiana.

As has been the case throughout the 2019 competition, the water level on St. John is extremely high – possibly even more so than the lakes used in the Shotgun, Elimination and Sudden Death Rounds. That translates into an abundance of cover in the form of cypress trees and boat docks, but with a pair of wild cards in the form of shallow, grassy flats on the opposite ends of the lake.

“Those flats look to have clearing water,” MLF analyst Marty Stone pointed out. “I’d look to those two areas as likely places for these largemouth to pull up onto to spawn.”

Where, When to Watch

The Championship Round of the 2019 General Tire World Championship can be seen Saturday at 1 p.m. ET on CBS Television Network.