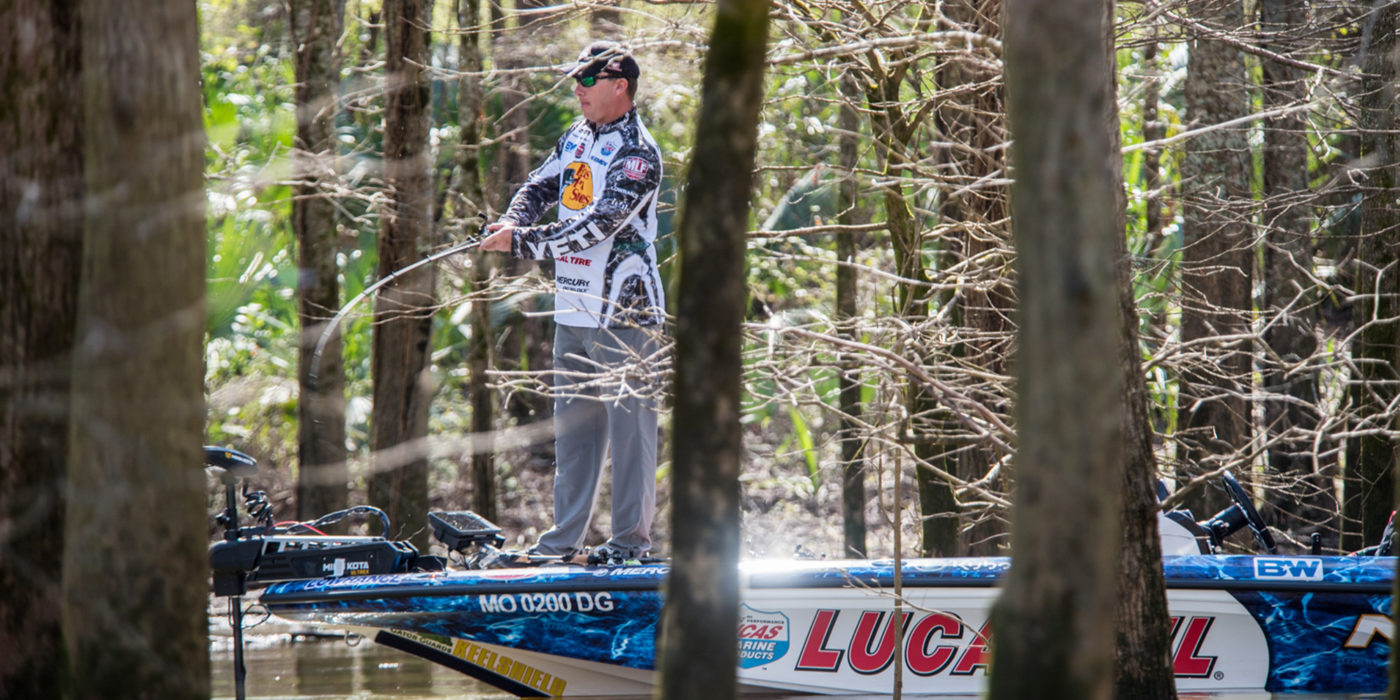 Andy Montgomery ready to compete in the Elimination Round 1 on the Black River-Cocodrie Complex. Photo by Garrick Dixon

VIDALIA, La. – Bobby Lane knew where he was the minute his MLF official pulled into the launch area near the small town of Monterey, Louisiana. The 2017 General Tire World Champion surveyed the waters of the Black River Lake-Cocodrie Lake Complex, the competition grounds for the first Elimination Round of the 2019 World Championship.

Lane and the field – Aaron Martens, Gary Klein, Andy Montgomery and Ish Monroe – competed on this series of fisheries during the 2018 Challenge Cup, and the Florida pro remembered it well.

“We smashed ‘em here on a squarebill last time,” he said. “I doubt that’ll be the case this time around, though.”

Almost certainly not. Whereas that 2018 Cup event was contested in late spring, the 2019 General Tire World Championship Presented by Bass Pro Shops is in the lower Mississippi River Valley in late winter. Water temperatures are different, water levels are different, and fish are in a dramatically different spawning stage.

Add to that the current conditions as Lane and the field motor out for their brief ride-around before competition begins: The Black River-Cocodrie Complex is roughly 6 feet lower than it was three weeks prior to our arrival in Vidalia, and still dropping. It’s also extremely colored, and fish are moving shallow to spawn.

That, according to MLF analyst Marty Stone, is the perfect trio of conditions for a dynamic day of fishing.

“Anytime you have falling water in a river system, that usually means bang-up fishing,” Stone said. “You have three conditions that are going to concentrate a lot of fish in the shallows. If the anglers can find the right stretch with the right water color, this could be a terrific day.”

The Black River Complex consists of Black River Lake and Cocodrie Lake, which are connected by Workinger Bayou. Black River is a serpentine river lake of 1,000 acres, surrounded by residential property and littered with docks and manmade cover. Cocodrie Lake is a classic Mississippi River oxbow lake: shallow and loaded with cypress trees and natural cover.

The biggest X-factor: water color. While the system’s largemouth are definitely feeling the tug of pre-spawn, identifying and locating the best water clarity will be a key.

“It’s really stained here, I hope I can find something that looks a little better as fast as possible,” Martens said before takeoff.

The Quest to Move On

Martens and Lane enter the Elimination Round in the best shape: Martens with 21 pounds, 6 ounces from his Shotgun Round, Lane with 15-8. Gary Klein will start with 11-5, Montgomery with 8-1 and Monroe with 8-0. The top two with the most combined weights at the end of the Elimination Round will move on to the Sudden Death Round, the bottom three will be eliminated.

“I’m glad I have a little bit of cushion, but you’re never comfortable with a lead in this format,” Martens admitted.

Where and When to Watch

The first Elimination Round of the 2019 General Tire World Championship can be seen on Saturday, July 6 at 2 p.m. ET on the CBS Television Network.