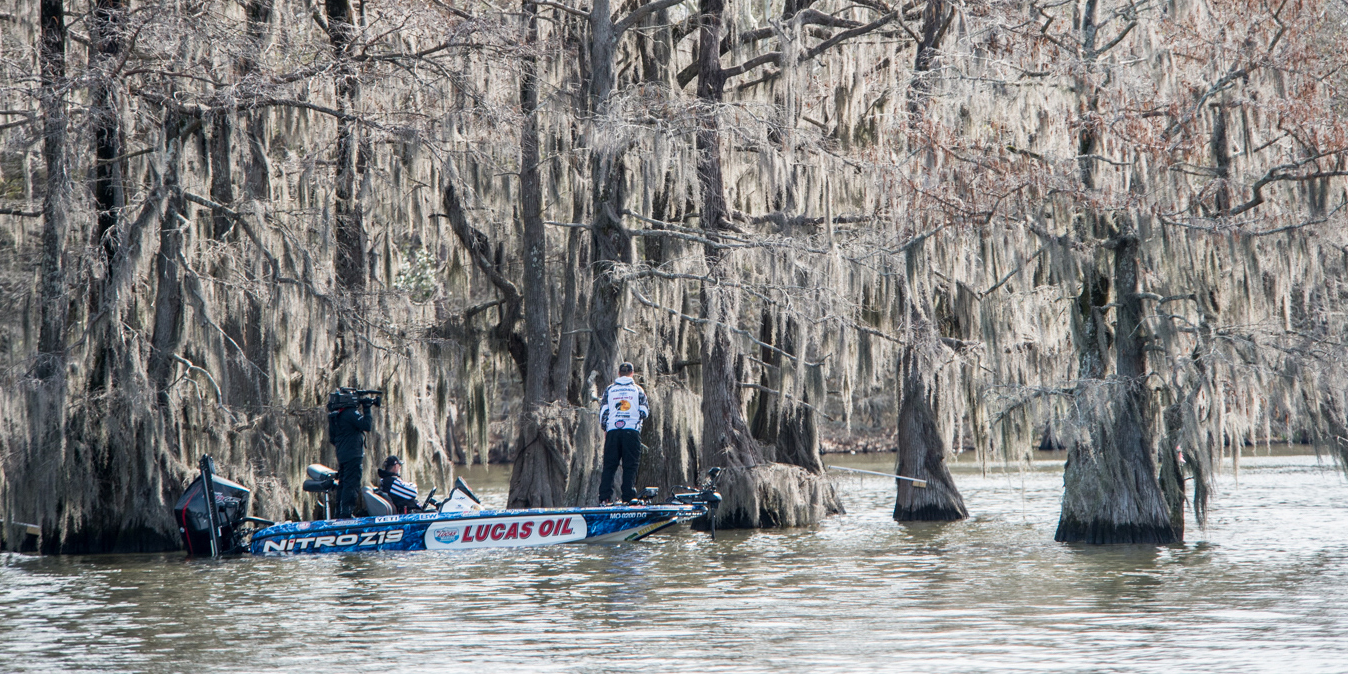 Andy Montgomery works his way around cypress trees on Lake Bruin during Shotgun Round 1 of the 2019 General Tire World Championship. Photo by Garrick Dixon

VIDALIA, La. – As the 12 anglers fishing the 2019 MLF General Tire World Championship Presented by Bass Pro Shops arrived in Vidalia, Louisiana before the start of competition, there was an undertone of anticipation that exceeded the usual pre-event antsiness. Blame it on the looming storm system bearing down on the lower Mississippi River Valley. Blame it on the expectation of catching the area’s largemouth in pre-spawn.

Or, simply attribute it to the fact that the title “World Champion” was up for grabs, an honor that only two anglers have ever claimed (one of them Bobby Lane, who won the inaugural World Championship in 2017).

“I’m ready to get this thing started. Like, right now,” Lane admitted bluntly the day before competition started.

As viewers sit down for the Saturday premiere of the first Shotgun Round on CBS Television Network (2 p.m. ET), there are several conditions to keep a watchful eye on.

Does Anybody Have an Advantage?

Lane will be joined in the first Shotgun Round on Lake Bruin – a classic Mississippi River oxbow of 2,900 acres – by Aaron Martens, Andy Montgomery, Takahiro Omori, Gary Klein and Ish Monroe. If familiarity is indeed an advantage, then the only angler with a disadvantage is Omori: the other five competitors all fished the Sudden Death Round of the 2018 Challenge Cup on Lake Bruin, and four of them (Martens, Monroe, Montgomery and Klein) advanced out of that Sudden Death.

Omori will be seeing Lake Bruin for the first time.

What Stage Are the Fish In?

Unlike that 2018 Challenge Cup, which was contested in lower water in late spring, the fisheries around Vidalia are all affected by high, dirty water during the World Championship. That, combined with the spawn timing of Bruin’s largemouth, will play key roles in how this first Shotgun Round plays out.

“This area has been hammered with fronts, the water is high and dirty, but the trees are budding and the largemouth are coming (to spawn),” advised MLF analyst Marty Stone.

Because the winner of the Shotgun Round receives an automatic berth in the Sudden Death Round, the psychology of SCORETRACKER® could play a role, especially early in the day. Martens is a notoriously fast starter in Cup-style competitions, which tends to put pressure on the rest of the field to play catch up.

“I’d really like to get off to a good start,” Lane admitted. “Lake Bruin kind of got the best of me the last time we fished here, and it wouldn’t be a shock for someone like Aaron to really catch them good first thing in the morning.”

Where Should Fish Be?

As Stone points out, Lake Bruin is “A shallow-water fisherman’s dream,” and is loaded with fishy-looking cover: cattails, docks, cypress trees, manmade canals, shallow-water flats with vegetation and stained, warming water. But as attractive as that all looks above the surface, most important to this group of anglers is what you don’t see.

“Boat docks and cypress trees have a lot of appeal, but in the springtime when fish are thinking about spawning, it’s about (finding) the firm, sandy bottoms,” Stone said.