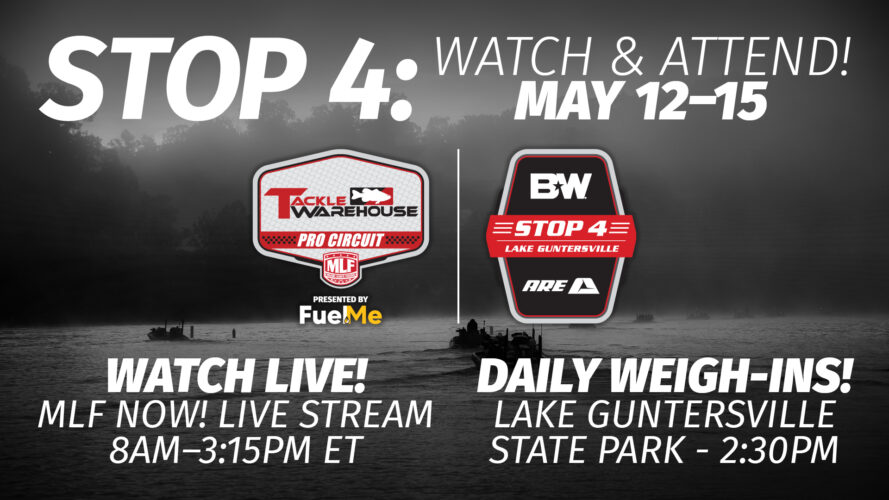 GUNTERSVILLE, Ala. – Major League Fishing (MLF), the world’s largest tournament-fishing organization, is set to return to Guntersville, Alabama next week, May 12-15, for the fourth event of the 2022 MLF Tackle Warehouse Pro Circuit Presented by Fuel Me regular-season – the B&W Trailer Hitches Stop 4 on Lake Guntersville Presented by A.R.E. The four-day event – hosted by Marshall County Tourism and Sports –  will mark the fifth time the Tackle Warehouse Pro Circuit has competed on Lake Guntersville and will showcase 158 professional anglers competing for a total purse of more than $850,000.

“Lake Guntersville offers some of the most challenging and exciting bass fishing in the country,” said Katy Norton, President of Marshall County Tourism and Sports. “We look forward to hosting the MLF Tackle Warehouse Pro Circuit in North Alabama and invite our community to come out to the Lake Guntersville State Park to meet the pros and join us for the daily weigh-ins and weekend activities.”

Over the past 22 years, MLF has held 127 tournaments on Lake Guntersville, placing it in fourth place in the Top 10 fisheries most-visited by MLF. When the Pro Circuit last visited the lake in 2017, General Tire pro Mark Rose of Wynne, Arkansas, stacked up a four-day total of 79 pounds, 11 ounces to take home the top award of $125,000 while pro Larry “The General” Nixon of Quitman, Arkansas, showed off the big bass on the fishery, bringing in an 8-pound, 6-ounce whopper at that same event. Tennessee pro David Walker of Sevierville holds the MLF record for the highest one-day total on the fishery, bringing in a limit weighing 29 pounds, 3 ounces back in 2009.

In its 27th season, the Pro Circuit features a roster of 158 of the world’s best bass-fishing professionals – including 16 pros from Tennessee – competing across six regular-season events, each with a top award of up to $135,000. The field is also competing for valuable points to qualify for the 2022 Tackle Warehouse TITLE Presented by Mercury, the Pro Circuit Championship – held this year on the St. Lawrence River in Massena, New York – and the coveted Pro Circuit Angler of the Year (AOY) title.

In Tackle Warehouse Pro Circuit competition, the full field of 158 anglers compete in the two-day opening round on Thursday and Friday. The Top 50 pros based on their two-day cumulative weight will advance to Saturday. Only the Top 10 pros, based on cumulative weight from the first three days, will continue competition on Championship Sunday, where weights will be zeroed and anglers will compete in a one-day shootout for the grand prize of up to $135,000, including the lucrative $35,000 Phoenix MLF Bonus for qualified anglers.

Local pro and Tackle Warehouse Pro Circuit angler Alex Davis of Albertville, Alabama, is a full-time guide on Lake Guntersville and said he is excited to see how the fishery is setting up for the tournament.

“The bass were spawning everywhere on Lake Guntersville that last week in April, so I think we will see a spawn, postspawn and possibly a shad-spawn bite during the event,” Davis said. “The shad-spawn bite is hit or miss the last few years, so it’s just a roll of the dice when that will happen, but it could definitely come into play next week.

“The temperatures are supposed to be in the 90s during the event, which is about 10 degrees above average for this time of year, so I expect we will see some fish moving offshore as well.”

Davis said with the broad range of techniques available on the fishery, anglers will be able to play to their strengths during the event.

“I expect we’ll see a lot of frogging and flipping grass in the shallow water, as well as wacky rigs, ChatterBaits, spinnerbaits, swimjigs and topwater baits being thrown,” Davis said. “A Shimano Macbeth Crankbait could be a pretty big player – that’s a good one that mimics shad during the shad spawn, so it could definitely come into play.

Even more importantly than the warmer temps, stable weather is expected throughout the event, so anglers can expect their areas and patterns during practice to carry over during the competition days as well.

“Thankfully we’re not expected to have these crazy fronts and winds that we’ve been fighting all year on the Pro Circuit,” Davis said. “Unless something unexpected happens and the bass are just in a funk, this will probably be the best tournament we’ve had all year as far as numbers of fish catches.”

Davis said he anticipates it will take 17½ to 18 pounds per day to make it into the Top 10, and 22 pounds on the final one-day shootout to win the championship round.

Anglers will take off at 6:30 a.m. CT, Thursday through Sunday, from the Lake Guntersville State Park, located at 1155 Lodge Drive, in Guntersville. Weigh-ins will also be held at the park daily at 2:30 p.m. Fans are welcome to attend the event or follow the live on-the-water action all four days of competition online on MLF NOW! beginning at 7 a.m. CT at MajorLeagueFishing.com.

As part of the event, on Wednesday, May 11 from 9 a.m. to Noon, the MLF Fisheries Management Division (FMD) in partnership with Berkley Labs will be participating in a Habitat Restoration Project supported by Mercury Marine and MossBack Fish Habitat at the Duck River Reservoir, located at 419 County Road 1650 in Cullman, Alabama. Volunteers from the MLF-FMD and the Union Sportsman’s Alliance will build 85 MossBack fish structures and place the habitats at various locations throughout the reservoir.

Fans are also invited out to a FREE Expo on Saturday, May 14 from 10 a.m. to 2:30 p.m. where they can join MLF staff, Alabama State Parks and the TVA Aquarium for Make and Take Outdoor Crafts, Camping 101, inflatables, animals, info booths, food trucks and a Kids’ Fishing Derby from 1-2:30 p.m. Registration takes place on site and bait will be provided, as well as the use of 50 rods and reels during the event. Prizes will be awarded to the first and second place youth anglers who catch the most fish.

The 2022 season culminates with the Tackle Warehouse TITLE Presented by Mercury, the Pro Circuit Championship, where the Top 48 pros in the points standings, along with 2021 TITLE Champion Jimmy Washam and 2021 AOY Michael Neal, will compete for a top prize of $235,000. The 2022 TITLE will be on the St. Lawrence River in Massena, New York, Aug. 16-21, and is hosted by the Town of Massena.