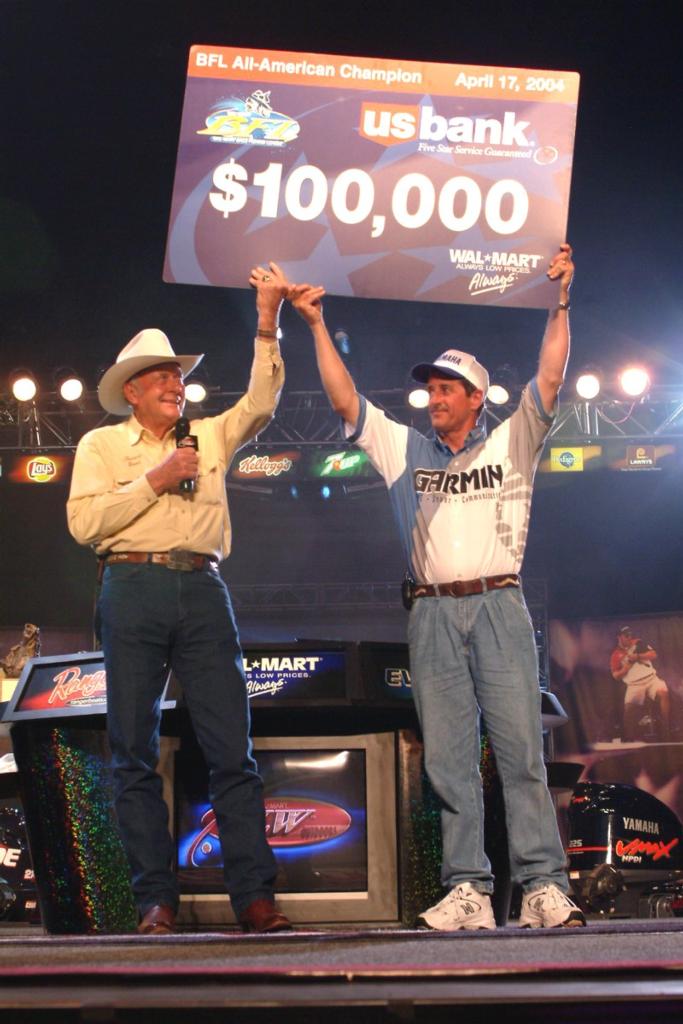 HOT SPRINGS, Ark. – Boater Allen Hayes of Moody, Ala., caught 15 bass over three days weighing 31 pounds to win the 2004 Wal-Mart Bass Fishing League All-American on Lake Hamilton by a mere 2 ounces – the closest finish in All-American history. Hayes, who receives $100,000 for the victory, claims one of the longest running, most lucrative and most respected championship titles in competitive bass fishing. With only 9 ounces separating the top four finishers, the tournament came down the final bass.

In his first full season on the BFL, Hayes qualified for the All-American through the Choo Choo Division and the Clark Hill regional, where he placed sixth. Hayes’ primary patterns, throwing a 1/2-ounce chartreuse spinnerbait in shallow water and slow rolling a 3/8 spinnerbait in 8 to 10 feet of water, produced consistent weights throughout the tournament.

“I tried to put together two patterns, a shallow and deep pattern, so I could go to one if the other didn’t work,” said Hayes, an accountant manager. “Today, I caught two of my keepers in shallow water and three in deep water. The deeper water was on a ledge with relatively large rocks on it. I caught all my fish right around the corner from the launch ramp.

“I can’t believe this. I’m speechless, and I’d normally have plenty to say.”

In contingency awards, Lefebre won a Ranger 519 VS bass boat as the highest finishing Ranger Cup participant in the All-American. Schafer won the Boater Division Yamaha Be the Best Award, which pays $10,000 to the highest finishing BFL division points champion, and the Shop-Vac High Performance Award, consisting of four Shop-Vac products, which goes to the boater with the heaviest total catch during the first two days of competition.

Friday saw the conclusion of the tournament for co-anglers, with Scott Boatright of Sheridan claiming top honors and $50,000. Boatright, who earned the 2003 Arkie Division points championship in his first season in the BFL, caught a two-day total of 10 bass weighing 17 pounds, 4 ounces to claim $50,000 – the largest first-place co-angler prize in competitive bass fishing. Boatright ran away with the tournament in impressive style by winning the championship by nearly 4 pounds.

Boatright also won an additional $5,000 as the Co-angler Division Yamaha Be the Best Award winner and a $500 Wal-Mart shopping card plus $500 worth of Castrol products for winning the Castrol Co-angler Award, which goes to the winning co-angler if he is wearing a Castrol shirt or hat.

Other contingencies included the $500 Energizer Keeps on Going Award, which went to Mile Johnson of Beavercreek, Ohio, for advancing to the final round after finishing 21st on opening day.

This year’s championship marks the 20th anniversary of the first $100,000 award in competitive bass fishing. That historic award was presented to 1984 All-American champion Shaw Grigsby of Gainesville, Fla., for his victory on the Kissimmee Chain of Lakes in Florida. All-American qualifiers represent the best of more than 30,000 BFL participants nationwide.

As the nation’s leading provider of affordable, close-to-home weekend tournaments, the BFL is widely credited with opening competitive bass fishing to the masses. Wal-Mart and many of America’s most respected companies support the BFL and five other FLW Outdoors tournament trails. Wal-Mart has been the title sponsor of FLW Outdoors since 1997. For a complete list of FLW Outdoors sponsors and for more information about the premier products and services they offer, please visit FLWOutdoors.com.

FLW Outdoors and the Wal-Mart FLW Tour are named after the legendary founder of Ranger Boats, Forrest L. Wood.