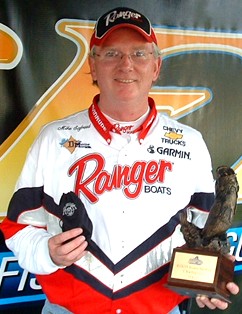 Safreed caught his tournament-winning bass on a white spinner with a Colorado blade in shallow-water brush piles. He earned a $1,000 bonus from Ranger Boats as the highest-finishing participant in the Ranger Cup incentive program, and he earned another $1,000 bonus from Bombardier for using an Evinrude Direct Injection outboard. Garmin also awarded him a $1,000 bonus for using Garmin electronics exclusively during the event.

Finishing second was Dan Fry of Marysville, Ohio, with four bass that weighed 6 pounds, 7 ounces worth $1,554. Tied for third were Steve Neal of Aurora, Ind. (five bass) and Robert Otto of Dayton, Ohio (four bass). Both anglers caught 6 pounds, 2 ounces worth of bass to earn $933 each.

Donald Sibley of Strasburg, Ohio, caught the tournament’s big bass in the Boater Division – a 3-pound, 7-ounce bass that earned him $510. He caught his big bass on a jig.

Jim Asher of Tipp City, Ohio, claimed $1,523 as winner of the Co-angler Division with a three-bass catch weighing 3 pounds, 15 ounces that he caught on a green pumpkin jig and a white spinner in shallow water.

Following the regular season, the top 30 boaters and 30 co-anglers based on year-end points standings will advance to the Kerr Lake regional near Henderson, N.C., Oct. 5-9, where they will compete against anglers from the Carolina, Northeast and Savannah River divisions for one of six slots in the 2005 All-American. With a $100,000 cash prize going to the winning boater and $50,000 to the winning co-angler, the All-American is one of the most prestigious and lucrative events in competitive bass fishing.