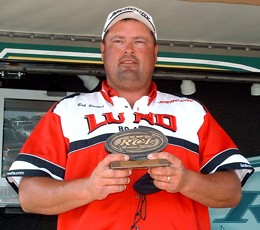 PIERRE, S.D. – Boater Robert Propst Jr. of Ft. Pierre caught a two-day total of 10 walleyes weighing 29 pounds, 4 ounces to claim victory at the Wal-Mart RCL Walleye League Super Tournament presented by Evinrude held Saturday and Sunday on Lake Oahe near Pierre. Propst earned $2,430 plus a $750 bonus for the win in the final South Dakota Division event of the season.

Propst caught his walleyes on a crawler with a 1-ounce bottom bouncer in 10 to 15 feet of water. The Wal-Mart RCL Tour veteran fished main-lake points and bays in the Pikehaven area.

Boaters and co-anglers who finish in the top 25 in final points standings in each RCL Walleye League division will advance to the $100,000 RCL League Finals Sept. 2-4 on Bays de Noc in Escanaba, Mich. The winning boater at the finals will receive an Evinrude-or Yamaha-powered Ranger, Crestliner or Lund boat. Every angler who receives weight credit in a tournament earns points, with 200 points awarded to the winner, 199 points for second, and so on, except for Super Tournaments, which award 300 points to the winner, 298 to second, and so on.

For more information about the Wal-Mart RCL Walleye League or to enter a tournament, call (270) 252-1000 or register online at FLWOutdoors.com.