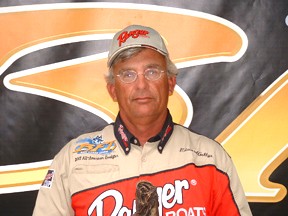 BAINBRIDGE, Ga. – Boater Edward Gettys of Stevenson, Ala., leads the list of six anglers who earned a ticket to the 2005 All-American at this weekend’s Wal-Mart Bass Fishing League Lake Seminole Regional. Qualifying anglers from four BFL divisions advanced to the regional, and Gettys topped the leaderboard with a three-day catch of 15 bass weighing 38 pounds, 3 ounces that earned him a new Chevy truck and an Evinrude- or Yamaha-powered Ranger boat.

The top 30 boaters and top 30 co-anglers from the Bama, Gator, Mississippi and Piedmont divisions comprised the Lake Seminole Regional field, and Gettys ranked 11th in Bama Division points standings to earn a regional berth. He caught 19 pounds, 12 ounces on day one and followed that up with another 6 pounds, 10 ounces on day two, and he wrapped up the win with a final-day catch that weighed 11 pounds, 13 ounces. He caught his tournament-winning bass on a white spinnerbait in 1 to 5 feet of water.

Boca Raton, Fla., resident Jay Trudel won the Co-angler Division with a three-day total of 11 bass weighing 20 pounds, 13 ounces. He caught his winning stringer on a pumpkin and gold flake Senko. Trudel advanced to the regional from the Gator Division, where he ranked 23rd in year-end points standings. He won an Evinrude- or Yamaha-powered Ranger boat for his regional win.

In regional competition, the full field competes for two days to determine the top six that advance to day three, where they compete for position and prizes. All six automatically advance to the All-American.