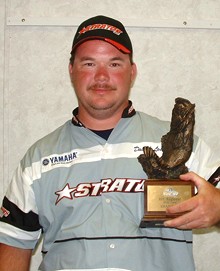 The Wild Card gives anglers who did not qualify for postseason regional competition a chance to make the All-American field. The Wal-Mart Bass Fishing League is divided into 24 divisions nationwide, each of which has five regular-season events in which anglers earn points. Every angler who receives weight credit in a tournament earns points. The top 30 boaters and top 30 co-anglers based on year-end points standings advance to one of six nationwide regionals, each of which send six boaters and co-anglers to the All-American. Anglers who entered all five events within a division but did not advance to regional competition were eligible to fish the Wild Card, which also sends six boaters and six co-anglers for an All-American field of 84 competitors.

Lowery fished a spinnerbait in shallow, cloudy water to catch 12 pounds, 6 ounces Friday and 7 pounds, 14 ounces Sunday. He competed in the Bulldog Division in 2004 and ranked 95th. Lowery competed in the 2002 All-American and finished 42nd.

Carver earned a $500 bonus from Ranger Boats as the highest-finishing participant in the Ranger Cup incentive program.

Melvin McNeal of Circleville, Ohio, caught a two-day total of eight bass weighing 11 pounds, 9 ounces to win the Co-angler Division and his first trip to the All-American, where he will compete for a top co-angler award of $50,000 cash. McNeal caught three bass Friday weighing 4 pounds, 8 ounces and another five bass Saturday that weighed 7 pounds, 1 ounce. He ranked 94th in 2004 Buckeye Division points standings.