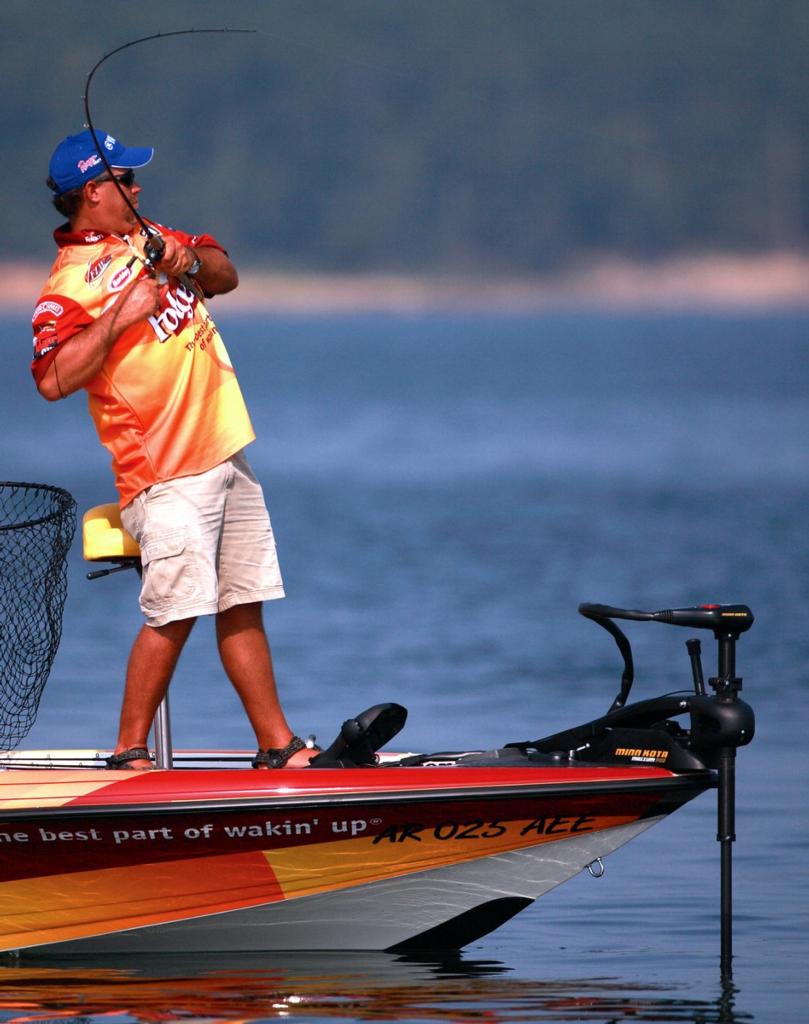 Scott Suggs sets the hook during the finals of the Forrest Wood Cup. Photo by Jason Sealock. Angler: Scott Suggs.
May 6, 2008 • MLF • Archives

ROGERS, Ark. – Fishing fans will have the opportunity to meet some of the most accomplished anglers in the world of competitive bass fishing at four Wal-Mart stores in Northwest Arkansas May 10, from 6-8 p.m.

The world-class anglers will be signing autographs, posing for photos and offering fishing tips to store visitors during the two-hour event, which precedes the annual $1.5 million Wal-Mart Open on Beaver Lake May 15-18. Hosted by the Rogers Convention & Visitors Bureau and the Bentonville Advertising & Promotion Commission, the lucrative tournament will feature 400 anglers from 37 states, Mexico, Italy, Spain, Australia and Japan with 200 of the worlds’ best bass pros fishing for a top award of $200,000 cash.

Among the anglers participating will be Folgers pro Scott Suggs of Bryant, Ark., who won $1 million – the largest first-place payday in the history of professional bass fishing – at the 2007 Forrest Wood

At pro night, Wal-Mart visitors can enter into a drawing held at each of the four stores for a chance to win an authentic Wal-Mart FLW Tour angler jersey. In addition, store visitors can register for a chance to fish with an FLW Tour pro. One winner will be chosen from each of the four stores, and each winner and a guest will receive a free guided fishing trip on Beaver Lake.

Tournament anglers aren’t the only ones winning big this season. With the introduction of FLW Fantasy Fishing™, FLW Outdoors® offers anyone the opportunity to enter for their chance to land the catch of a lifetime with the opportunity to win $7.3 million in cash and prizes. Players can become a virtual pro angler by signing up for Player’s Advantage, providing them with exclusive insider information that could guide them to a $100,000 victory at every Wal-Mart FLW Tour® stop and the Forrest Wood Cup. Player’s Advantage will give them an edge over the competition and increase their shot for a $1 million cash grand prize that will be awarded to the FLW Fantasy Fishing cumulative points winner. Those who visit FantasyFishing.com today can sign up for Player’s Advantage and FLW Outdoors will include a $15 Wal-Mart gift card.