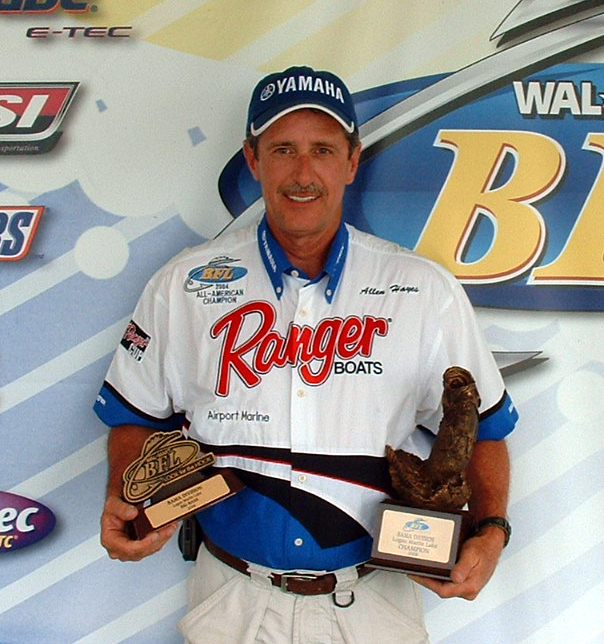 PELL CITY, Ala. – Boater Allen Hayes of Pell City, Ala., won the Wal-Mart Bass Fishing League Bama Division tournament on Logan Martin Lake Saturday with a five-bass catch weighing 17 pounds, 7 ounces. The victory earned Hayes $3,020 plus a $532 Ranger contingency bonus and placed him one step closer to qualifying for the Lake Murray Regional Championship in Columbia, S.C., Oct. 23-25, where he could ultimately win a new 198VX Ranger boat and a Chevy truck.

“This is great,” said Hayes, who won the 2004 BFL All-American in Hot Springs, Ark. “This win is really kind of overdue. I’ve had some good finishes, but haven’t won one since the All-American. I’m blessed that I got it.

“I started fishing deep and fished deep all day,” Hayes said. “I fished secondary points and humps about 15 feet deep. I caught fish on a crankbait, jig and spinnerbait. I just sort of mixed it up.”

Hayes said he caught eight or nine fish throughout the course of the day, and they came off of different spots and were spread out throughout the day.

Jim Kendrick of Oxford, Ala., earned $1,777 as the co-angler winner Saturday thanks to five bass weighing 11 pounds, 2 ounces that he caught working a magnum lizard and a crankbait over submerged brush piles.

Kendrick earned $227 as the co-angler Big Bass winner after catching a 4-pound, 10-ounce bass on a magnum lizard in submerged brush.

Bama Division anglers will visit Wheeler Lake in Decatur, Ala., Sept. 27-28 for a two-day Super Tournament, the division’s fifth and final event.