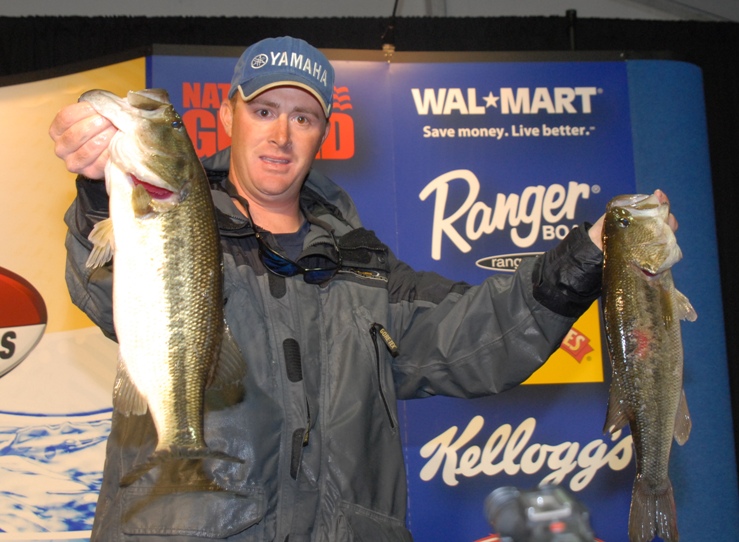 Pro Scott Canterbury of Odenville, Ala., is in second place after day two with a two-day total of 26-12. Photo by Rob Newell. Angler: Scott Canterbury.
July 12, 2008 • MLF • Press Releases

DETROIT – Odenville, Ala., native Scott Canterbury, who made his mark in the Wal-Mart Bass Fishing League before qualifying for the Wal-Mart FLW Tour, won the 2008 Duracell Rookie of the Year award with 817 points over six qualifying events.

With those 817 points, Canterbury also qualified for the $2 million Forrest Wood Cup by finishing the season ranked in the top 40 overall. He was followed in the Duracell Rookie of the Year standings by pro Greg Vinson of Wetumpka, Ala., with 789 points; pro Kyle Mabrey of McCalla, Ala., with 770 points; pro Rob Digh of Denver, N.C., with 760 points; and pro Keith Combs of Del Rio, Texas, who made the top-10 cut Friday and could finish the season with as many as 729 points. For winning Duracell Rookie of the Year, Canterbury earned $1,000 and a year’s supply of Duracell batteries.

“Winning rookie of the year was a goal I had at the very start,” Canterbury said. “It’s an awesome accomplishment. It’s been a long journey to get to this point, and now I’m looking forward to fishing the Forrest Wood Cup.”

Canterbury started the FLW Tour season off with a dismal 158th-place effort on Lake Toho in Kissimmee, Fla. After Toho, he rebounded nicely with back-to-back top-10 finishes on Lewis Smith Lake in Jasper, Ala., and Lake Norman in Charlotte, N.C. In those two tournaments alone, Canterbury earned $91,000 – finishing second and third respectively. At the Wal-Mart Open on Beaver Lake, the rookie pro took 64th place and a check worth $10,000. He earned a 69th-place finish at the Fort Loudoun-Tellico lakes in Knoxville, Tenn., and wrapped up the qualifying season with a 93rd-place finish on the Detroit River in Detroit.

In roughly a month, Canterbury will head to Columbia, S.C., for the no-entry-fee Forrest Wood Cup 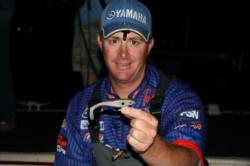 presented by BP and Castrol on Lake Murray. There he will face 76 other qualifiers from the FLW Tour, FLW Series, Stren Series Championship, BFL All-American and TBF National Championship for the sport’s biggest award – $1 million. For a complete list of Forrest Wood Cup qualifiers, visit FLWOutdoors.com.

Tournament anglers aren’t the only ones winning big this season. With the introduction of FLW Fantasy Fishing, FLW Outdoors offers anyone the opportunity to enter for their chance to land the catch of a lifetime with the opportunity to win $7.3 million in cash and prizes. Players can become a virtual pro angler by signing up for Player’s Advantage, providing them with exclusive insider information that could guide them to a $100,000 victory at every FLW Tour stop and the Forrest Wood Cup. Player’s Advantage will give them an edge over the competition and increase their shot for a $1 million cash grand prize that will be awarded to the FLW Fantasy Fishing cumulative points winner. Those who visit FantasyFishing.com today can sign up for Player’s Advantage and FLW Outdoors will include a $15 Wal-Mart gift card.