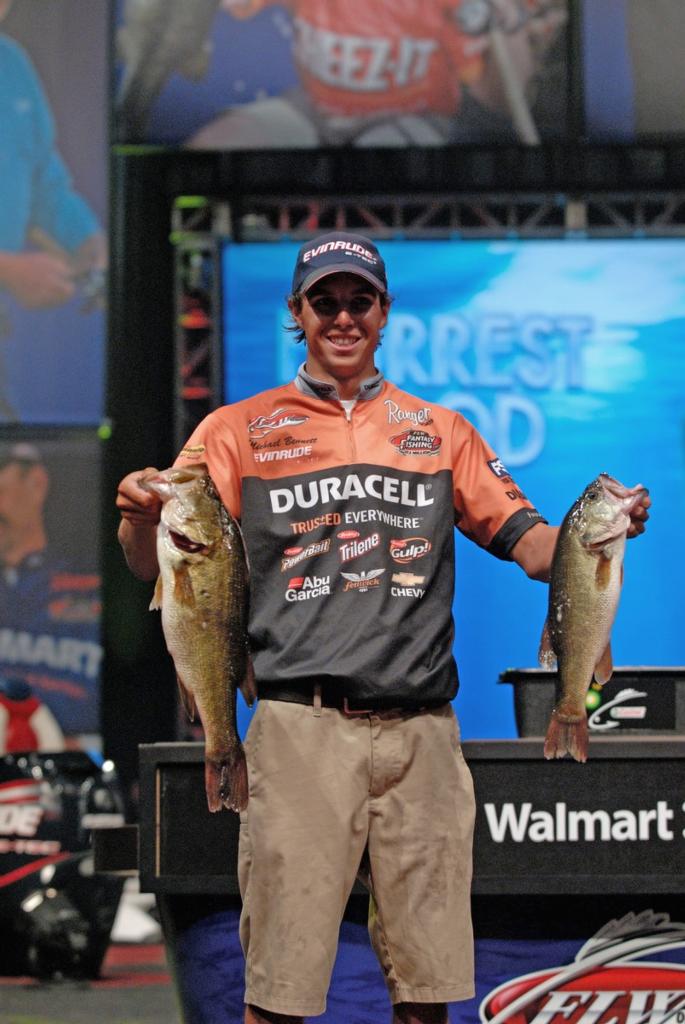 COLUMBIA, S.C. – Team Duracell pro Michael Bennett of Lincoln, Calif., crossed the stage with a five-bass limit weighing 15 pounds, 5 ounces to capture the lead on day two of the $2 million Forrest Wood Cup presented by BP and Castrol on Lake Murray. With a total opening-round catch of 10 bass weighing 27 pounds, 4 ounces, Bennett now holds a 14-ounce lead in the tournament featuring 77 pros and 77 co-anglers from across the United States, Japan and Korea.

“This is a little shocking,” said Bennett, who has earned more than $435,000 in FLW Outdoors competition. “I had one fish at 9 a.m. and finally gave up everything I was doing and started over. Then I got into the right little stretch and put three good ones in the boat and had my limit by noon. Then I just drove around the lake looking for stuff to fish the next two days.”

Bennett said he caught his three good fish in a spot he described as “shallower.” He said most of his spots dry up when he catches one fish off of them.

“I found a few areas that look like places I need to fish,” Bennett said. “I don’t know if they’ve been hit at all.

Mark Rose of Marion, Ark., trails Bennett in the No. 2 spot with nine bass weighing 26-6.

Rose said the shaky-head rig accounted for two small fish Friday. Rose said he caught most of his fish shallow and shared his spot with some other competitors.

“I felt like I could scratch and claw a few,” Rose said. “I could just feel that it wasn’t going to take much to make the cut.”

“Making the top 10 is awesome,” said Wilson, who has five wins and 14 top-10 finishes as a co-angler in FLW Outdoors events. “I’m happy to be here. Everything after the top 10 is just gravy.

“I struggled until noon and then caught five keepers between noon and 1 p.m.,” Wilson added. “Hopefully I can just go out and get five keepers.”

Wilson is paired with Bennett for the last day of co-angler competition. Wilson and Bennett have practiced together and lodged together in the past.

“Sometimes being friends can hurt you,” Wilson said. “Sometimes I won’t fish as hard because I know those guys need those fish on the final day.”

Wilson said he caught nine fish – including six keepers – throughout the course of the day by fishing soft plastics slowly.

Forrest Wood Cup contenders will launch at 7 a.m. each day from the Lake Murray Marina and Yacht Club located at 1600 Marina Road in Irmo, S.C. Daily weigh-ins will be held at The Colonial Center located at 801 Lincoln St. in Columbia each afternoon at 5 p.m. The Forrest Wood Cup Family Fun Zone and Outdoor Show – featuring outdoor product exhibits, fishing seminars by Hank Parker, Jimmy Houston and other bass-fishing legends, and free daily giveaways – runs 2 to 8 p.m. Saturday and 11 a.m. to 5 p.m. Sunday at the Columbia Metropolitan Convention Center located at 1101 Lincoln St. in Columbia.

Chris Rose, John Salley and Charissa Thompson will join the world’s top professional bass anglers to tape FSN’s hit “Best Damn Sports Show Period” Saturday at noon in The Colonial Center. Celebrity guests scheduled to make an appearance are Steve Spurrier, the head football coach of the University of South Carolina Gamecocks, William “The Fridge” Perry of the 1985 Super Bowl champion Chicago Bears and Mike Schmidt, the Hall of Fame third baseman who played his entire 18-year career for the Philadelphia Phillies. Taping for the nationwide cable show will precede the tournament’s day-three weigh-in and crowning of the co-angler champion. Spectators could possibly make an appearance on the show as well, so you won’t want to miss this opportunity. Admission to the Forrest Wood Cup and “Best Damn Sports Show Period” taping is free.

Also, multi-platinum recording artist Tracy Byrd will perform a free concert hosted by WCOS-97.5 FM on the main stage at The Colonial Center on Sunday at 4 p.m., just before the start of the final weigh-in.

Coverage of the Forrest Wood Cup will be broadcast to 81 million FSN (Fox Sports Net) subscribers in the United States as part of the “FLW Outdoors” television program airing Sept. 28 and Oct. 5. “FLW Outdoors” is also broadcast in Canada on WFN (World Fishing Network) and to more than 429 million households in the United Kingdom, Europe, Russia, Australia, Africa, Asia, and the Middle East through a distribution agreement with Matchroom Sport, making it the most widely distributed fishing program in the world. The program airs Sunday mornings at 11 a.m. Eastern time in most markets. Check local listings for times in your area.