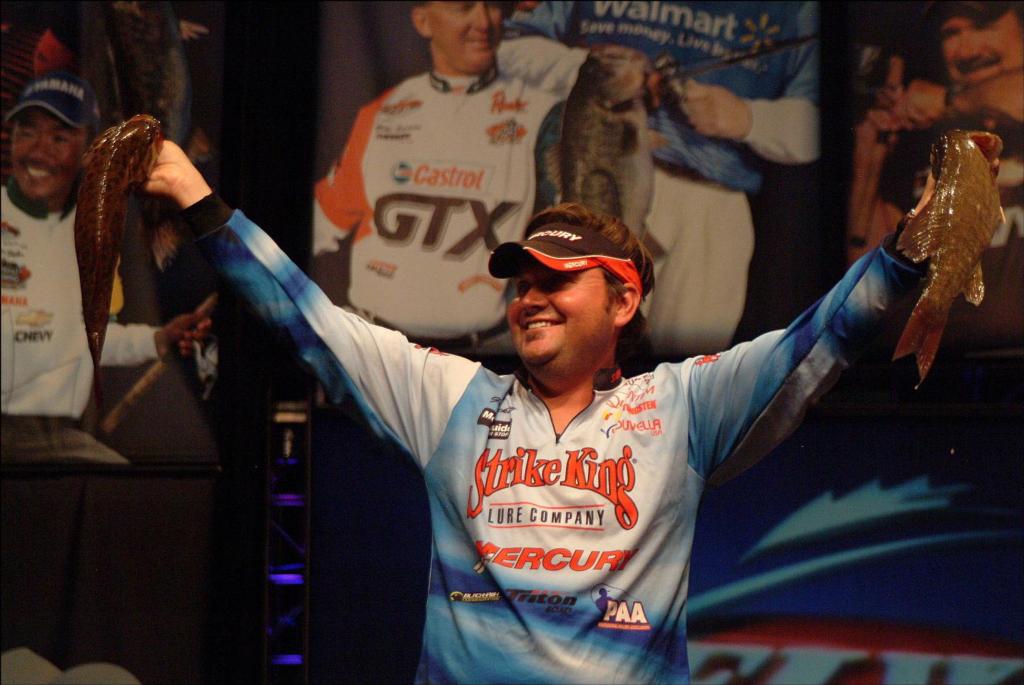 PITTSBURGH – Greg Hackney of Gonzales, La., caught a five-bass limit weighing 11 pounds, 12 ounces Friday to capture the lead after weighing only 3 pounds, 1 ounce the first day of competition in the $2 million 2009 Forrest Wood Cup presented by BP and Castrol – the World Championship of Bass Fishing – with a two-day catch of eight bass weighing 14-13. He now holds a 5-ounce lead in the tournament featuring the best pros and co-anglers in the world. The Forrest Wood Cup is the richest bass fishing tournament in the world and features a $1 million first-place cash award.

“I started off this morning catching a lot of short (fish) and then once things got going right, I stopped catching shorts and started catching big fish,” said the Bassmaster Elite pro. “By the time I got my limit, I had only caught one more short.”

Hackney said he caught seven or eight keepers during the course of the day on three different baits. Hackney didn’t reveal the baits, but said he employed them all in his pattern. Hackney said he was fishing a pattern on the Allegheny River and not a particular spot.

“You never know with (the river),” Hackney said. “It changes every day. It’s getting higher and it rained a bunch today. And that’s going to have some effect on today and tomorrow.”

Hackney said the heavy rains Friday helped position his fish and was key to his success. Hackney said his sack included a 3-pounder and a 3 3/4-pounder among his five smallmouth.

Team Kellogg’s pro Dave Lefebre of Union City, Pa., advanced to the final round of 10 pros in the No. 2 spot with a two-day total of 10 bass weighing 14-8.

Thursday Lefebre said he targeted rocks that were holding fish in two spots that were 50 yards apart in one area. The spots required precise casts to provoke strikes. However, Lefebre didn’t return to the area on the second day of competition.

“I left them alone today,” Lefebre said. “I fished around it. I was within 20 feet of them and catching stragglers that were hanging around the edges.

“I haven’t switched baits at all,” Lefebre added. “Tomorrow and the next day there’s going to be a few more surprises for them, hopefully.”

Lefebre said he spent three 17-hour days of practice in the same pool and has more places saved to fish.

“We went east up the Allegheny about three locks and starting fishing about 9:30 and within the first five minutes I caught my first fish of the morning,” Baciuska said. “For the next hour, I caught one every five or 10 minutes. I ended up having a bit of slow time in the middle of the day and at the end of the day I caught a couple more for a total of seven keepers. The water clarity cleared up a lot and it really helped my bite.”

Baciuska said he targeted wood and rock in shallow water with soft plastics.

Anglers will take off at 7 a.m. Saturday and Sunday from Steelers Quay, North Shore Riverfront Park located at Art Rooney Drive across from the South Plaza of Heinz Field in Pittsburgh. Weigh-ins will be held at Mellon Arena at 66 Mario Lemieux Pl. in Pittsburgh beginning at 5 p.m.

In conjunction with the weigh-ins, FLW Outdoors will host a free Family Fun Zone and outdoor show at the David L. Lawrence Convention Center located at 1000 Ft. Duquesne Blvd. in Pittsburgh. The Family Fun Zone will be open from 11 a.m. to 8 p.m. on Saturday and 11 a.m. to 5 p.m. on Sunday. The Family Fun Zone offers fans a chance to meet their Fantasy Fishing team anglers face-to-face and review the latest products from Berkley, Lowrance, Ranger, Evinrude, Yamaha and other sponsors while children are treated to giveaways, fishing themed games and rides like the Ranger Boat simulator. Children 14 and under visiting the Family Fun Zone on Sunday will receive a free rod and reel combo while supplies last. One lucky member of the audience will even win a new special edition Three Rivers Ranger Z20boat powered by Evinrude during the final 5 p.m. weigh-in Sunday, Aug. 2, courtesy of Froggy Radio. Admission is free, and you must be present to win.