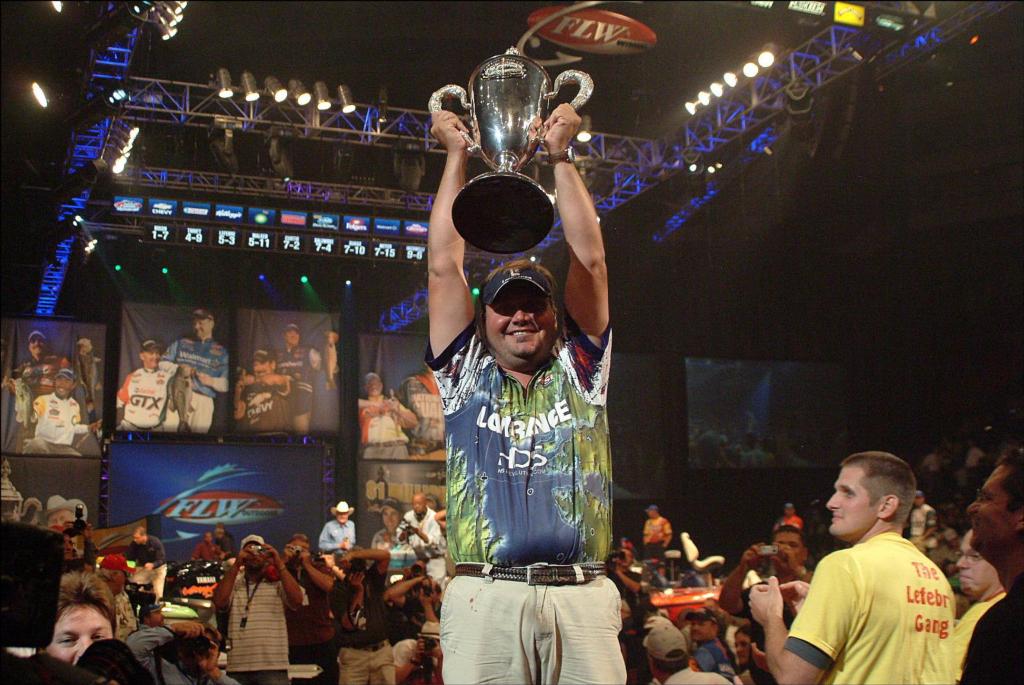 PITTSBURGH – Greg Hackney of Gonzales, La., caught a final-round total of nine bass weighing 9 pounds, 9 ounces to win $500,000 in the $2 million 2009 Forrest Wood Cup presented by BP and Castrol – the World Championship of Bass Fishing – on the Three Rivers in Pittsburgh. Hackney topped his closest rival, Michael Iaconelli of Runnemede, N.J., by 3 ounces to earn the historic win before a capacity crowd at Mellon Arena.

“This is by far the highlight of my career,” said Hackney, who won the 2005 Land O’Lakes Angler of the Year title. “Words don’t describe it. It’s one of those things that’s going to take years to soak in. I was thinking all day and I didn’t have a clue I was going to win.”

Hackney, who qualified for the Forrest Wood Cup through the FLW Series’ BP Eastern Division, said the rivers underwent a variety of changes in both level and clarity during the course of the event. As a result, Hackney said he had to use a variety of baits to catch his limits.

“I caught a big bag of bass on a 1/4-ounce spinnerbait, but all of my other fish I caught on a drop-shot, a buzzbait, a jerkbait … I had 20 rods on the deck this week,” Hackney said.

Hackney said he started the tournament in the Pittsburgh pool of the Allegheny River. The second day he made a run up and fished his way back to Pittsburgh. Hackney said he relied heavily on a pattern fished around mayflies.

Hackney said he relied on a golden shiner-colored 1/4-ounce Strike King Premier Pro spinnerbait for the majority of his smallmouth fishing. Seventeen-pound-test fluorocarbon allowed Hackney to fish the light spinnerbait faster than monofilament line would have.

“By far my best day of practice was three pools up,” Hackney said. “I really didn’t want to fish for those fish until I had to. I fished the first day conservatively and didn’t catch a limit, and I really thought I would. So the second day I had to catch them big, but I didn’t think I was going to catch them that big.”

“You have to look at the positives in everything,” said Iaconelli, who won the 2003 Bassmaster Classic title. “I’m walking out of here with $100,000 and I never fished a FLW Tour or FLW Series event.”

Iaconelli’s goal for the championship was to fish the Allegheny River the first two days and then switch to the Ohio River for the last two days of competition. The first two days Iaconelli said he “junk fished” in the second pool and caught fish on several different baits. His key baits the first two days were a Jackyl jerkbait and a Berkley Gulp! Minnow on a drop-shot rig.

“Once I got down to the Ohio, everything got thrown out the window,” Iaconelli said. “It was real dirty and had heavy current. The last two days every fish I caught came on a 5-inch green pumpkin sinking minnow. I cut off about a half inch and made a blunt end and threaded it on a 1/4-ounce Tru-Tungsten Ikey Head jig head.

Iaconelli said he targeted fish in eddies by casting upstream and bouncing the bait over rocks. Iaconelli said the bait had to be bulky for the fish to be able to find the bait.

“I don’t think I’ve ever felt this confident in my fishing in my whole life, ” Iaconelli said. “Even when I was fishing club tournaments. It’s just a matter of time before I close one of these up.”

Brad Roberts of Nancy, Ky., won the Co-angler Division and $50,000 Saturday with a five-bass limit weighing 6 pounds, 4 ounces followed by Michi Oba of Tokyo, Japan, in second place with two bass weighing 1-13 worth $10,000.