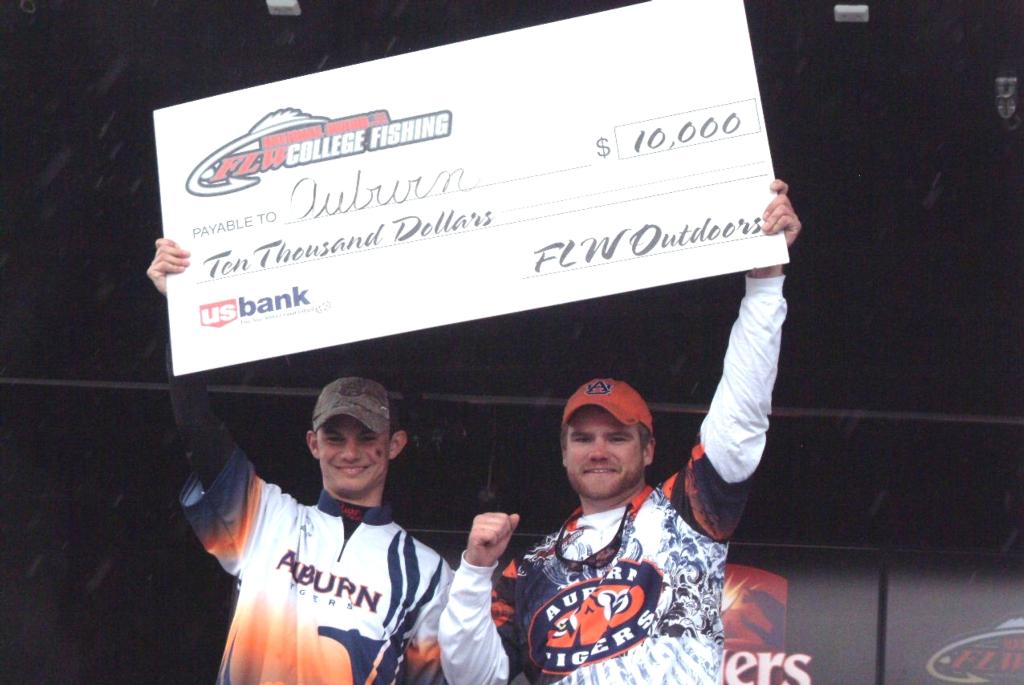 The win also helped them advance to the Southeast Division Regional Championship where they could ultimately win a Ranger 177TR with a 90-horsepower engine wrapped in school colors for their school’s club and $25,000 for the school they represent.

“I am glad we got ’em today,” said Baker. “I like Florida, but the fishing was though today, I like fishing a little closer to home. 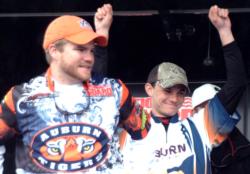 “Jordan and I weren’t able to do any pre-fishing for this tournament so we relied heavily on what me and my partner learned at last year’s tournament. We fished the same area on the southwest corner of the lake, near Turner’s Cove, where we pulled up on some grass and found fish biting.

“We actually caught our limit by 9 – 9:30 which really helped us a lot. We then concentrated on finding some bigger fish that we knew were out there, unfortunately this cold front shut the fish down and we couldn’t really find that big one we were looking for. We caught most of our fish with skinny dippers, the ones we missed using skinny dippers we got on Senkos.”

“I was really surprised we won,” said Lee. “With our low weight I didn’t think we would even make the top-5. The cold front that came through really made the bite tough. I knew my partner was a good fisherman, so just hoped for the best.”

The University of Florida placed a disappointing sixth at today’s event and did not qualify yet for the 2010 Southeast Division Regional. They will have another shot, however, as the next qualifying event will be at Lake Seminole, Bainbridge, Ga., May 1, 2010. 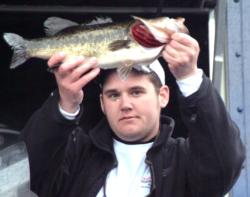 FLW Outdoors announced the College Fishing trail in May 2008. Full-time students enrolled in four year colleges or universities are eligible to participate in the events. Schools can send two-person teams to each of the four qualifying events in their division, with each event limited to a maximum of 40 teams. Each team has the opportunity to win $10,000 for first through $2,000 for fifth place. Prize money is split evenly between the winning team’s club and the school they represent. The tournaments are free to enter, boats and drivers are provided by FLW and all collegiate teams receive a travel allowance. The top five teams in each qualifying event advance to one of five televised three-day National Guard FLW College Fishing Regional Championships. 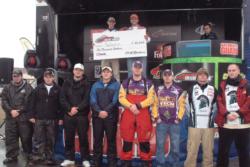 The top five teams from each regional championship will advance to the National Guard FLW College Fishing National Championship.

The National Guard FLW College Fishing National Championship is a three-day televised event hosting the top five teams from each regional, 25 total teams. Teams will be provided shirts and wrapped Ranger boats towed by Chevy trucks for this competition.

The winning team will be declared the National Guard FLW Collegiate National Champion and will qualify for the 2011 Forrest Wood Cup. The winners will also receive use of a wrapped boat and Chevy truck for cup competition.