Boater Adam Wagner of Cookeville, Tenn., caught a five-bass limit weighing 13 pounds, 10 ounces April 2 to win $5,028 in the BFL Music City Division tournament on Percy Priest. Wagner was throwing a jig in the river, targeting rocks and trees in shallow water to sack his limit. 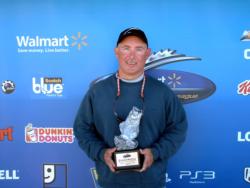 The next BFL Music City Division tournament is scheduled for April 30 on Center Hill Lake in Sparta, Tenn. After the fifth Music City Division tournament is complete, the top 40 boaters and 40 co-anglers based on point standings will qualify for the Oct. 20-22 Regional Championship on Lake Chickamauga in Chattanooga, Tenn. Boaters will compete for a top award of a Ranger 198VX with a 200-horsepower Evinrude or Mercury outboard and a Chevy pick-up, while co-anglers will fish for a new Ranger 198VX.