Slot limit, lack of sun proved challenging for field during opening round on Cross Lake 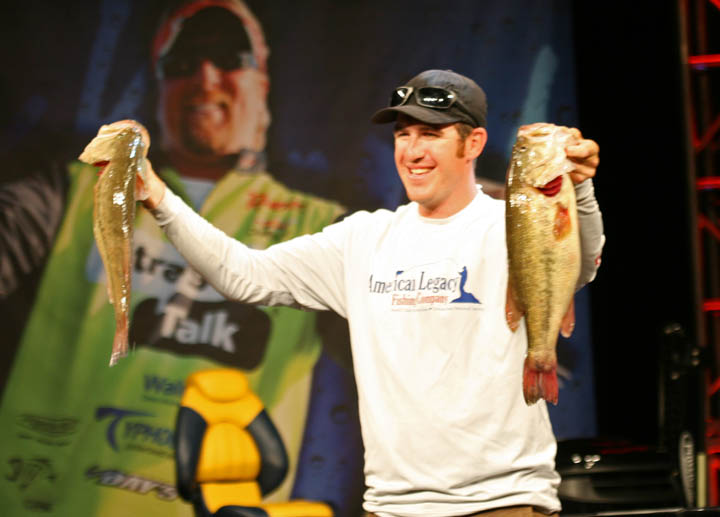 Staying on the move and knowing when to hit various spots was the key for pro leader Jacob Wheeler. Photo by David A. Brown. Angler: Jacob Wheeler.
May 19, 2011 • MLF • Archives

SHREVEPORT, La. – Jacob Wheeler of Indianapolis, Ind., crossed the stage Thursday with a five-bass limit weighing 18 pounds, 6 ounces to lead day one of the Walmart BFL All-American presented by Chevy on Cross Lake. Wheeler holds a commanding 7-pound, 8-ounce lead over Lloyd Pickett Jr., from Bartlett, Tenn., who caught five bass weighing 10-14 in a tournament featuring the top 49 boaters and top 49 co-anglers from across the country.

“God blessed me today,” said Wheeler, who is fishing his first BFL All-American. “I knew the lake would be difficult because of the slot limit. Lakes with slots are horrible to fish tournaments in so I knew it was going to be a bear to fish. I covered a lot of water and just kept moving. First I’d catch a fish by a dock then in some trees and then by a dock again. I just kept moving and adjusting and it paid off. Buzzbaits, crankbaits, flipping, cranking, it all produced.

“It is hard to stay consistent on a lake with a slot limit. The guy that can bring a 10-pound average per day to the stage is the guy that is going to win and it is not going to be easy,” Wheeler went on to say. “Tomorrow I will go back to some of the same areas and do pretty much the same thing I did today. I had eight keepers, four over and four under. I also had six slot fish…”

In a tournament that saw many anglers struggle with the slot limit, the lake seemed to tease anglers with what she has to offer. The biggest fish of the day was a giant brought in by the co-angler leader, weighing 8 pounds, 15 ounces. Many agreed the fish were there, they just couldn’t catch them. Cross Lake has a slot limit on fish from 14 to 17 inches in length that allows anglers to keep fish that measure more than the minimum length of 12 inches to under 14 inches as well as fish that measure more than 17 inches.

Rounding out the top 10 boaters after day one on Cross Lake are:

“I am rendered speechless,” said Winchester, who caught the biggest fish of the day. “I really have to thank my boater who put us on some fish and luckily I caught the big one.”

Co-anglers are fishing for a top award of $60,000 this week plus qualification into the 2011 Forrest Wood Cup.