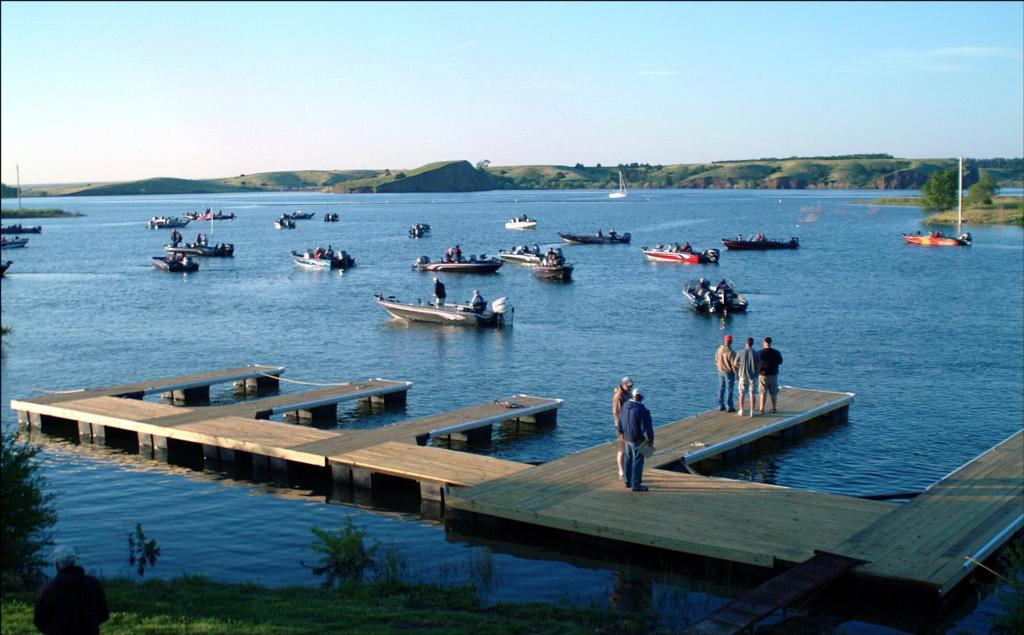 An FLW Walleye Tour field of 58 boats made its way from Spring Creek to the big water of Lake Oahe for the second Western Division tournament of the 2010 season. Photo by Patrick Baker.
August 17, 2011 • MLF • Press Releases

PIERRE, S.D. – The National Guard FLW Walleye Tour will visit Lake Oahe in Pierre, S.D., Aug. 25-27 for the fourth and final qualifying event of this season. The tournament, being hosted by the Pierre Area Chamber of Commerce, will feature as many as 200 top walleye anglers casting for top awards of up to $63,000 in the Pro Division and $10,500 in the Co-angler Division.

“Consistency is going to be key to this tournament,” said Ted Takasaki of Sioux Falls, S.D. “The challenge is going to be staying on fish for all three days of the tournament. The water has started to significantly drop, so the fish are starting to get skittish and are moving around a lot more. Anglers are definitely going to have to have multiple spots to fish with a good presentation to help keep them consistent.

“Trolling crankbaits, bottom bouncers and rigging on points will be a couple of key techniques used for this tournament. Night crawlers, chubs and artificials will mostly be the baits used. I think to stay in this tournament, guys are going to have to bring 17 to 20 pounds to the scales each day to stay in contention.

“Fishing has been good on Oahe all summer, but due to dropping water levels, it may be a little more challenging next week. All in all, it should be a good tournament with lots of fish caught.”

Water levels on Lake Oahe have been high all summer; however, they are now dropping. According to Takasaki, the lake has dropped 3 feet in the last two weeks, and he expects it to drop another 1 to 2 feet before the tournament starts.

Anglers will take off from Spring Creek Resort & Deep Water Marina located at 28229 Spring Creek Place in Pierre at 7 each morning. Weigh-ins will also be held at the marina beginning at 3 p.m. on Thursday and Friday. Saturday’s final weigh-in will be held at the Walmart located at 1730 N. Garfield in Pierre beginning at 4 p.m. Prior to the final weigh-in, FLW Outdoors, in conjunction with the NPAA, will be hosting a free Family Fishing Clinic, where children can receive free rod and reels plus other great giveaways. Fans will have the opportunity to interact with professional anglers, ride a Ranger boat simulator, enjoy interactive games and activities, and learn more about the sport of fishing. All activities are free and open to the public.