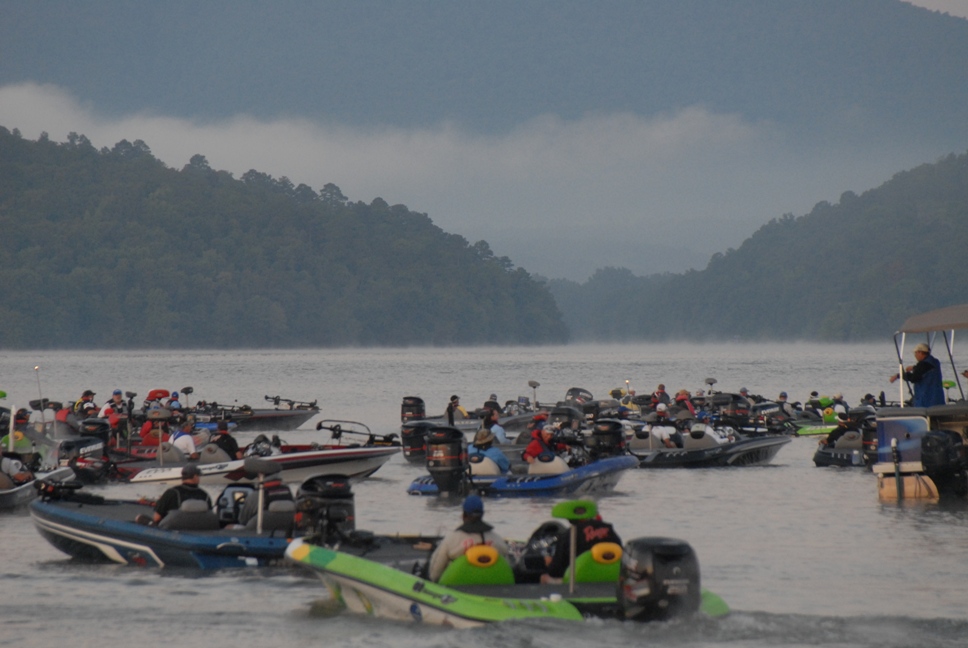 Back at it: Boats await takeoff command on day two of the FLW Series BP Eastern on Lake Dardanelle. Photo by Rob Newell.
October 27, 2011 • MLF • Archives

“Fishing should be real good,” said ScotchBlue Painter’s Tape pro Ray Scheide of Dover, Ark. “There will be some heavy sacks brought to the scales, 18 pounds or more, but it is going to be hard to duplicate those kinds of weights two days in a row. Because of low water levels on the lake, the bass are not acclimating to shoreline cover or offshore either. They are grouped up chasing schools of baitfish and can be found anywhere.

“The key for this tournament is not getting locked into one location,” Scheide continued. “The same spot probably won’t work two days in a row. Anglers should fish with an open mind and keep moving.

“The early-morning topwater bite should be good,” Scheide went on to say. “Buzzbaits, frogs and spooks should bring in a few. In the afternoon I would change to a spinnerbait or a crankbait. This tournament is going to be won power-fishing. I am guessing the winning weight will be right around 41 pounds.”

The BFL is a 24-division circuit devoted to weekend anglers, with 120 tournaments throughout the season, five in each division. The top 40 boaters and 40 co-anglers from each division have now qualified for regional tournaments and are competing to finish in the top six, which will then qualify them for one of the longest-running championships in all of competitive bass fishing – the Walmart BFL All-American presented by Chevy. Top winners in the BFL can move up to the EverStart Series or even the Walmart FLW Tour.

The BFL Regional Championship tournament is being hosted by the Russellville Advertising & Promotion Commission.