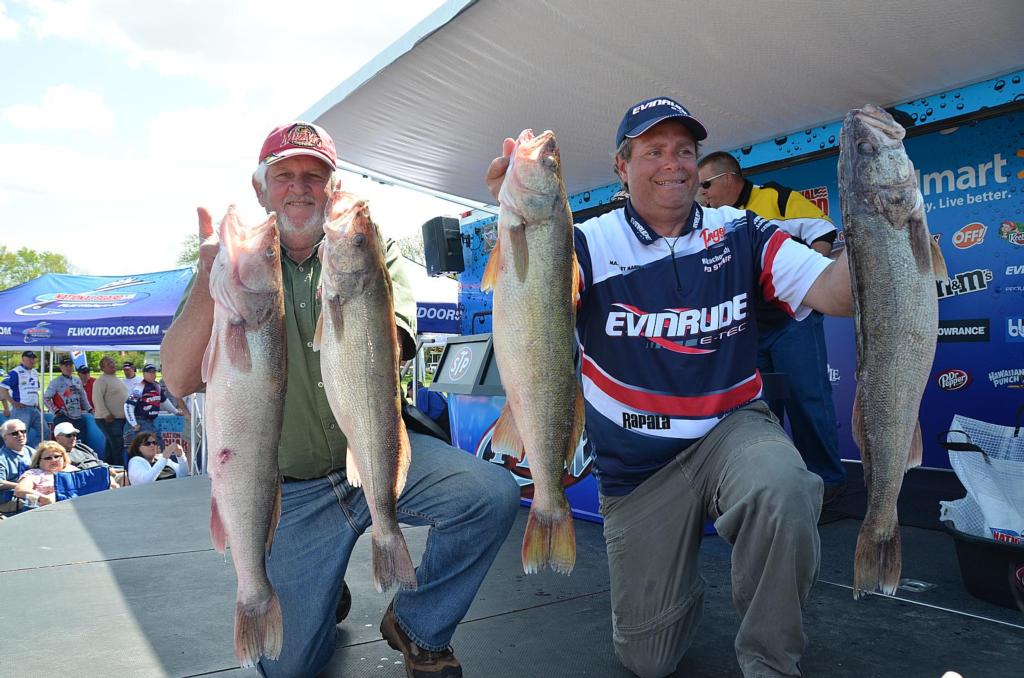 PORT CLINTON, Ohio – The windy conditions that greeted anglers Thursday morning seemingly had no effect on walleye pro Rick Zachowski of Milwaukee, Wis., and his co-angler Jimmy Cox of Bono, Ark., for the first day of the National Guard FLW Walleye Tour on Lake Erie presented by Dr. Pepper. The competitors’ five best walleyes came in today weighing 42 pounds, 13 ounces, good enough to snatch the lead on day one of the second walleye event of the 2012 season being held in Port Clinton, Ohio.

The duo holds a respectable 1-pound, 8-ounce lead over their closest competitors. This walleye tournament features 123 pros and 123 co-anglers representing 18 different states along with Canada, where pros are fishing for a top award of $63,000 and co-anglers are shooting for an award of $10,500.

“This lake is just awesome,” said Zachowski, who has more than $66,000 in career FLW earnings. “Being allowed to cull out here and not having to make the tough decisions is great. Besides Michigan, this is the only other place where FLW visits that we are allowed to cull, and it makes for some big weights.

“Our morning started out a little rough,” Zachowski continued. “We went to my first spot where I had been catching a lot of 26- and 27-inchers in practice, but the fish were just not biting there. So I moved over to my second spot, which wasn’t too far away, and then it started happening really fast. On one pass through, we had our limit. On the second pass, I caught another 27-inch walleye and was able to cull. On our third pass, we didn’t catch anything, and I was considering moving to another spot but I figured we would make one more pass. I told my co-angler that if we could get another 27-incher out of there then we would leave, as I did not want to burn up all of my fish for day two. On our last pass we ended up getting a 311/2-incher, and I told Jimmy to box it up, we’re done.

“I didn’t get to that area until 9 a.m., and we were out of there right around noon,” Zachowski went on to say. “The females seem to be moving in from the reefs out east, and hopefully they’re moving in to where I’m at.”

Despite his day one success, Zachowski was hesitant to mention where and what techniques he was employing, but did give some insight on his strategy for tomorrow.

“I don’t want to talk about my technique too much. I know that there are a lot of our anglers that read the FLW website every night, and I do not want to give anything away right now,” he said. “However, my strategy for tomorrow will be to go back to that same spot and stay there pretty much all day unless the winds push me out. I’ve got around five different areas where I know fish are, so hopefully I’ll still be on top of the leaderboard tomorrow.”

Rounding out the top 10 pros and co-anglers after day one on Lake Erie are:

Coverage of the Lake Erie tournament will be broadcast in high-definition (HD) on NBC Sports Network when “FLW” airs October 7 from 1-2 p.m. ET. “FLW” is hosted by Chip Leer and is broadcast to more than 559 million households worldwide, making it the most widely distributed weekly outdoors-sports television show in the world.