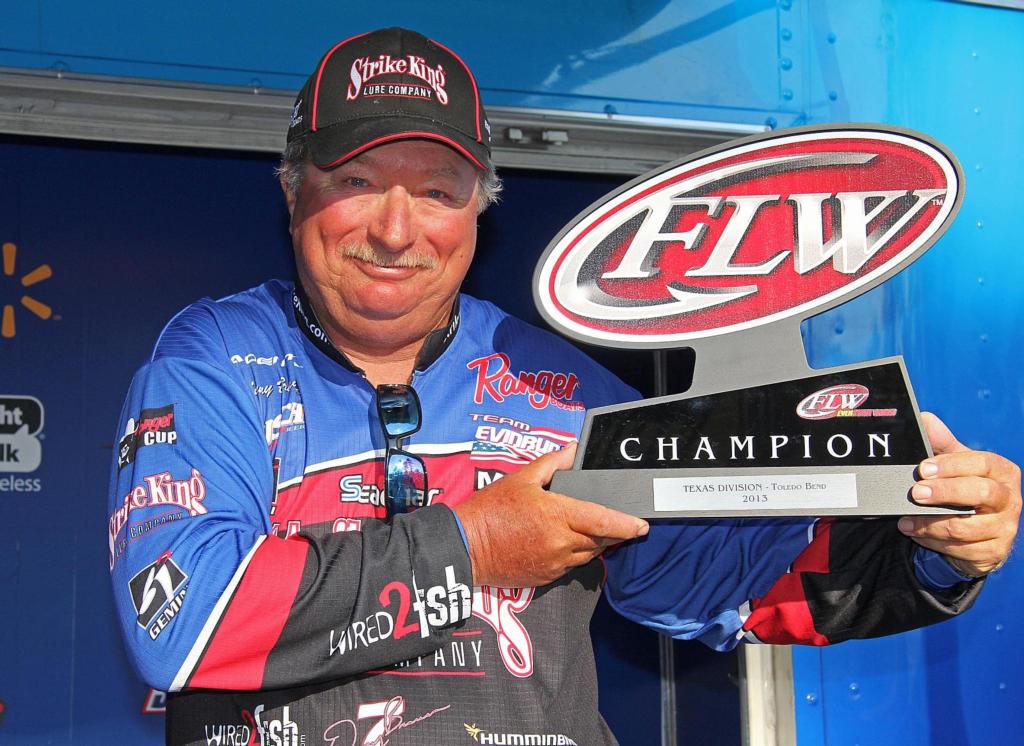 HEMPHILL, Texas – Denny Brauer of Del Rio, Texas, weighed a five-bass limit totaling 17 pounds even Saturday to win the EverStart Series Texas Division event presented by Mercury on Toledo Bend with a three-day total of 15 bass weighing 56 pounds, 8 ounces. For his victory, Brauer earned $27,137 and a Ranger Z518 with a 200-horsepower Evinrude or Mercury outboard motor.

“It feels awesome,” said Brauer. “It was definitely a struggle today and I went through a lot of different emotions all day long wondering if I was going to end up with enough weight to win. I am totally elated.

“All three days I fished boat docks and pretty much stayed on the lower end of the lake,” Brauer continued. “I was covering a lot of docks but catching most of my fish where there was 5 to 10 feet of water underneath. I was pitching a 1/2-ounce Strike King Denny Brauer pro model jig in black and blue color on 25-pound-test line.

“I really didn’t see a lot people out there doing what I was doing,” Brauer went on to say. “That’s the neat thing about Toledo Bend. It’s such a good lake and there is so much cover that boat docks are not the premier player here. Most people ignore the docks. The fact that I had them all to myself probably enabled me to win the tournament.”

This was Brauer’s first victory in FLW competition but he is no stranger to fishing success. Brauer recently retired from an outstanding career with the Bassmaster Elite Series and moved south to his present home in Del Rio, Texas. This is his second season fishing the EverStart Series and he is currently sitting in fourth place in the Texas division Angler of the Year race.

The top 10 pros on Toledo Bend were:

Tommy Rascoe caught the biggest bass of the tournament in the pro division Friday – a 10-pound, 6-ounce bass – that earned him the day’s EverStart Series Big Bass award of $178.

Kevin Burks of Kountze, Texas, won the co-angler division and a Ranger Z117 with an Evinrude or Mercury outboard motor with a three-day total of 14 bass weighing 36 pounds, 6 ounces.

The top 10 co-anglers on Toledo Bend were:

Martin caught the biggest bass of the tournament in the co-angler division Friday – a 13-pound, 1-ounce bass – that earned him the day’s EverStart Series Big Bass award of $118.

The next EverStart Series Texas Division tournament will be April 18-20 at Lake Texoma in Pottsboro, Texas, and is hosted by the Denison Area Chamber of Commerce.