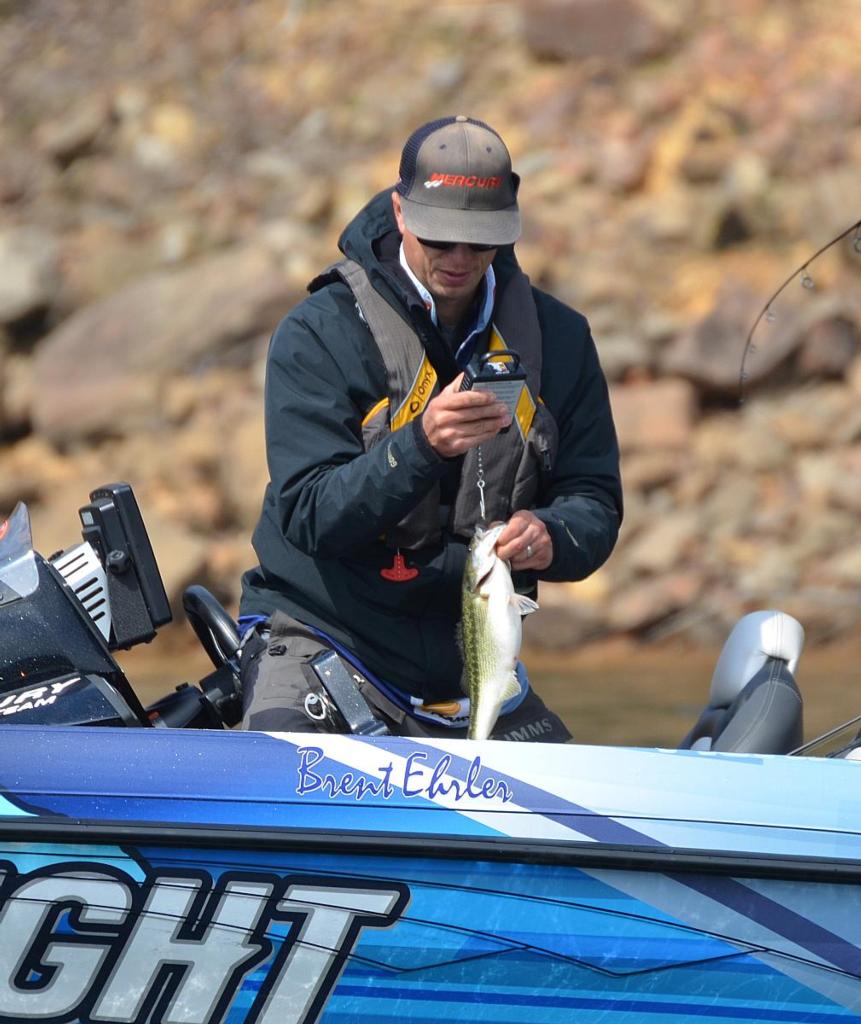 JASPER, Ala. – Keystone Light pro Brent Ehrler of Redlands, Calif., caught five bass weighing 11 pounds, 15 ounces Saturday to maintain his lead at the Walmart FLW Tour on Lewis Smith Lake presented by Evinrude. He now advances to the final day of competition with a commanding lead in a tournament that features a full field of the world’s best professional anglers casting for the top prize of up to $125,000.

“It was a grind just like yesterday,” said Ehrler, who has led all three days of tournament competition. “I was thinking I’m going to go from leading the tournament to not even making the cut. It’s such an emotional roller coaster. I was finally able to get a limit mid-day. Once I got a limit, I was able to run around and culled up a couple of times. It started off really slow, though.”

Ehrler remained tight-lipped about his bait selection, but said he is catching them deep and doing one thing different with his baits.

“I’m catching them deeper – from 30 to 40 feet,” he said. “I’m doing one thing different, bait-wise, though. I feel like it’s been the key to getting a lot of the better bites for me, and right now I need every advantage that I can get.

“I’m not going to sleep easy tonight,” Ehrler went on to say. “If I could choose my conditions tomorrow, it’d be sunny and calm. From what I hear, we’re supposed to be seeing the opposite. If it gets windy out there, it could really hurt my chances. My co-angler caught 12 pounds off of my key areas today, though, so that tells me that there are still a few fish around there. I’m just going to put my head down and if the wind doesn’t affect me too much, I can catch another 12 pounds.”

The top 10 pros advancing to the final day of competition on Lewis Smith Lake are:

For this event, FLW was issued a permit from the Alabama Department of Conservation and Natural Resources that exempted tournament competitors from the normal lake slot limit that states all bass measuring 13 to 15 inches must be immediately released.

“I’ve been doing this for a long time,” said Tidwell, who earned his first victory in FLW competition Saturday. “I made the Forrest Wood Cup last year, but this is awesome. I had a great week of fishing. I caught every fish that I weighed in, except one, drop-shotting a Roboworm. One came on a jig on day one, but that Roboworm was my confidence bait. It was a grind each day, but the key for me was just staying focused.”

Fans will be treated to the FLW Outdoors Expo at Walmart on Sunday from noon to 4 p.m. prior to the final weigh-in. The Expo includes Ranger boat simulators, the opportunity to interact with professional anglers, enjoy interactive games, activities and giveaways provided by sponsors, and fans can learn more about the sport of fishing and other outdoor activities. Country music artist Dylan Scott will perform a free concert for fans on the FLW stage starting at 3 p.m. All activities are free and open to the public.