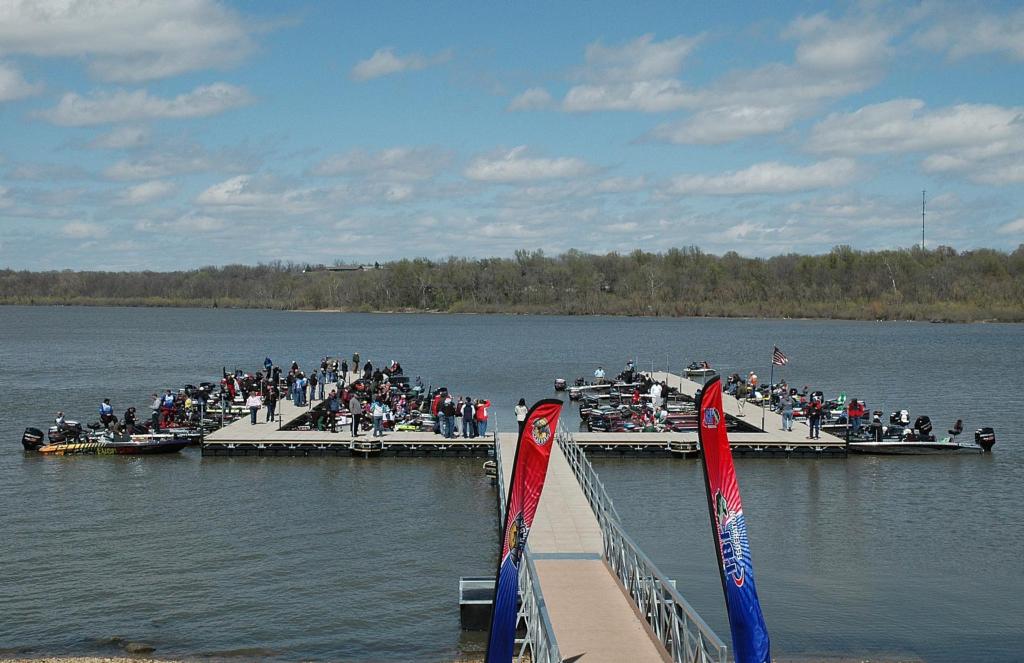 PONCA CITY, Okla. – Steady showers over the first three days of practice left several TBF anglers without fish and without plans going into the 2013 Federation National Championship. However, on Thursday, Oklahoma’s Grand Lake finally delivered as nearly 1,100 pounds of bass were caught with over 60 percent of the field catching five-bass limits. 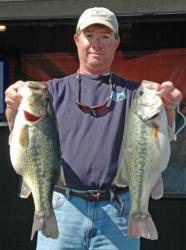 Leading the charge after the first day of competition was Robbie Robinson of Mobile, Ala., who recorded a limit of bass weighing 23 pounds, 7 ounces. Although Robinson struggled to find but five keepers in three days of pre-fishing leading up to the event, he excelled today.

“I figured it out the first fish I caught in practice, but I just knew it wasn’t going to work. The weather was going to kill what I was doing,” Robinson said. “But by 9 a.m. I started to see the pattern emerge I had settled on with that first fish.”

Robinson had some trolling motor issues that hampered him before taking off this morning. As a result, he was only spot on from about 9 a.m. to 1 p.m.

“Before that I just had my crying towel out, crying out to the fish, `Throw me a clue; give me a hint,’ he said.

But Robinson got his hint and then some.

“I’ve been here and done this many, many times. I know what can happen out there. I’m just looking for a limit,” he said.

Tomorrow, Robinson said he is going to try and put it all together to see if he can secure a spot in the final round. 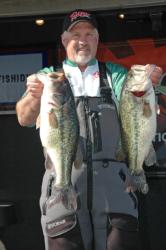 Just one ounce separates Robinson from the second overall contender, Roger Mezenen of Morgan, Utah. Mezenen remained close to the top of the leaderboard with a limit weighing 23 pounds, 6 ounces.

“The biggest bag I’ve ever caught – this one,” Mezenen said as he walked across the stage with a smile on his face. “I just have to go out there and get on them tomorrow. I’m around them, I just have to get it done.”

Mezenen snagged a heavy drown early on before finding his rhythm which led to a solid second-place finish.

“Yeah, it was a quite a letdown reeling in that big drown. We don’t have those fish in Utah, but it didn’t take long after that.”

Mezenen’s said he has a long, quiet stretch to cover tomorrow. He’s also hoping the weather will stabilize.

“I wished it would cloud up and rain, but as long as we have wind – I’m just looking for some stable conditions.”

Ninety-four of TBF’s best grassroots anglers will continue to compete this week for the coveted national champion title, over $200,000 in cash and prizes – which includes the $100,000 “Living the Dream” prize package – and national bragging rights. After Friday’s second day of tournament action, 14 anglers will advance to the final day of competition and be that much closer to achieving their dream of winning the 2013 Federation National Championship.

The TBF National Championship represents the culmination of more than two years of work for most of these anglers, who competed against the nearly 25,000 members in TBF clubs across the United States and Canada to earn their invitation. Only the best anglers from each US state federation, the Association of Collegiate Anglers National Champions and the Canadian Champions earn a slot at the national contest.

TBF National Championship anglers will compete for their share of nearly a quarter of a million dollars in cash and prizes. Every TBF championship angler will receive a check and other prizes. In total, 16 berths will be awarded in two of the sport’s most coveted events – the Forrest Wood Cup and the BFL All-American.

The top boater and co-angler from each of the seven TBF divisions will advance to the 2013 BFL All-American. The TBF Federation National Champion boater and co-angler will also advance to the world’s championship of bass fishing, the 2013 Forrest Wood Cup. In addition, the winning boater will receive the $100,000 “Living the Dream” prize package which includes fully paid entry fees into the 2014 FLW Tour as a Tour pro, travel expense stipends for each event, and use of a “Living the Dream” wrapped Chevy truck and Ranger boat for the year, as well as, other sponsor merchandise.

The Bass Federation Inc., (TBF), is the oldest and largest, organized grassroots angling organization in America. TBF is 100-percent owned by those it serves and is dedicated to the sport of fishing. TBF affiliated state federations and their member clubs conduct more than 20,000 fishing, youth and conservation events at the local level each year, and have provided the foundation for the entire bass fishing industry for nearly 45 years.

For more information about The Bass Federation, visit bassfederation.com, or call 580.765.9031. Look for TBF on Facebook at Facebook.com/thebassfederation and on twitter at Twitter.com/bassfederation.

FLW is the industry’s premier tournament-fishing organization, providing unparalleled fishing resources and entertainment to our sponsors, fans and host communities. FLW is offering anglers of all skill levels the opportunity to compete for millions in prize money nationwide in 2012 over the course of 191 tournaments across five tournament circuits, each providing an avenue to the sport’s richest payday and most coveted championship trophy – the Forrest Wood Cup. FLW is committed to providing a lifestyle experience that is the “Best in Fishing, On and Off the Water,” through a variety of platforms including tournaments, outdoor expos and the world’s richest fantasy sports game – FLW Fantasy Fishing. For more information about FLW and FLW Fantasy Fishing, visit FLWOutdoors.com or FantasyFishing.com and look for FLW on Facebook at Facebook.com/FLWFishing and on Twitter at Twitter.com/FLWFishing.