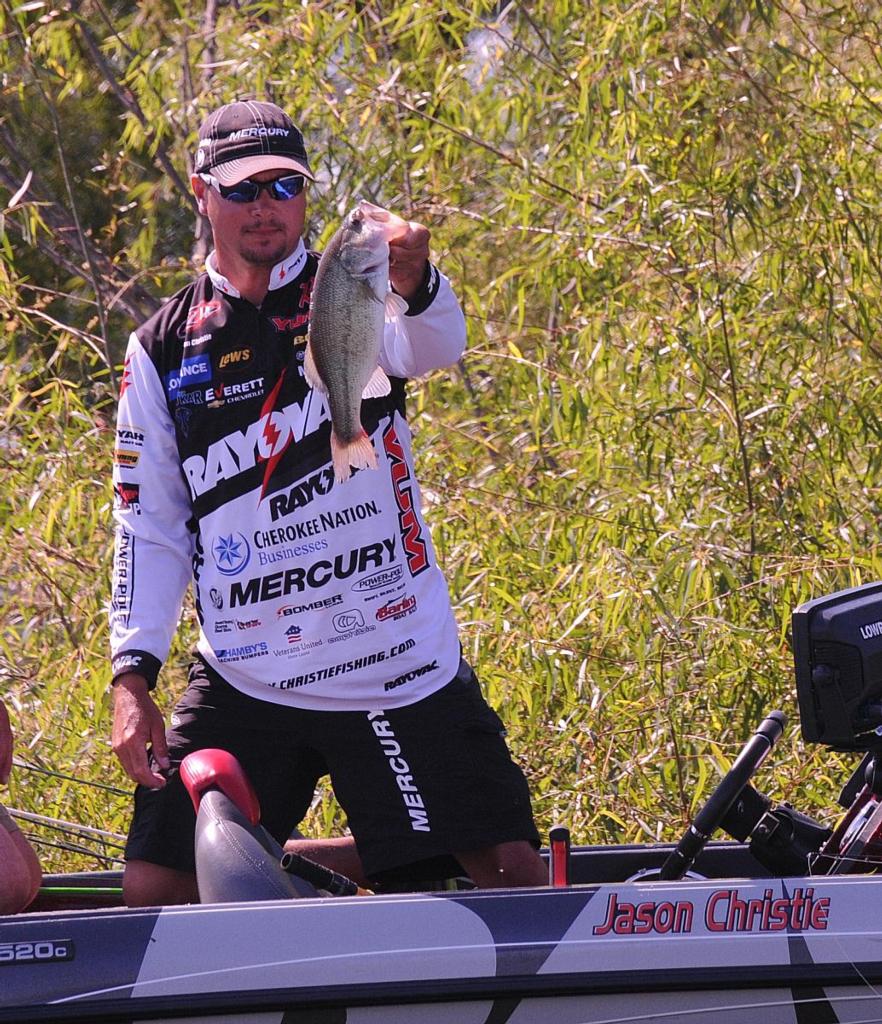 GROVE, Okla. – Rayovac pro Jason Christie of Park Hill, Okla., brought a five-bass limit to the scales Friday weighing 18 pounds, 14 ounces to extend his lead at the Walmart FLW Tour at Grand Lake presented by Castrol. Christie’s two-day cumulative weight of 40-10 gives him a 2 pound, 12 ounce lead over second-place pro Robbie Dodson of Harrison, Ark., who has a two-day weight of 10 bass worth 37-14 as the tournament heads into the third day of competition. The field is now cut to the top 20 in the four-day event that features the world’s best bass-fishing anglers casting for the top cash award of up to $125,000.

“I didn’t catch as many fish as I did yesterday,” said the Rayovac pro, who has more than $800,000 in career earnings with FLW. “I think that the key yesterday was the wind. It pulled a lot of those fish off of the bank and into the outside edge. Today, I think that the current slowed down and the water has stabilized. I’m averaging 20 pounds a day, and that’s what I’m looking for. I’m worried about the next couple of days, though.”

Christie estimated that he caught 20 to 25 keeper fish today, and said that the fish were caught with three different flipping patterns.

“They’re on three different kinds of stuff, in three different areas of the lake,” said Christie. “I’ve been to two of the areas, but I was scared to go to the third today because of all of the boat traffic.”

Christie said that he was mainly flipping two or three different baits, including a YUM F2 Wooly Bug in two different colors. He said that he would occasionally mix in a BOOYAH spinnerbait, but his primary pattern was flipping.

“Every scenario requires a different bait,” Christie said. “I lost two big ones today right at the boat that I should have had. I made a mistake and was too quick on one. I pitched my bait in there and saw him hit it, but I should have given him a second and I didn’t. It’s aggravating.

“I think a lot of the females have started to pull out,” Christie continued. “But they’re hard to catch because the water is so dirty. A lot of these 4-pounders that everybody are catching are males. A lot of these fish are guarding fry; you just can’t see it.

“Hopefully, tomorrow with less boat traffic I’ll be able to bounce around a little bit,” Christie went on to say. “All of my past tournaments here have been one- or two-day shootouts. I’ve never fished a four-day tournament here. I’m learning just like everyone else. You just have to go with the conditions, and tomorrow I’m just going to go fishing.”

The top 20 pros that will fish Saturday on Grand Lake are:

Darrell Davis of Dover, Fla., won Friday’s 3M ScotchBlue Big Bass Award on the pro side with a fish weighing 6 pounds, 3 ounces to win the $500 prize.

Anglers will take off from Wolf Creek Park located at 963 N. 16th St. in Grove at 6:30 a.m. each morning. Saturday and Sunday’s final weigh-ins will be held at the Walmart located at 2115 S. Main St. in Grove beginning at 4 p.m.

Fans will also be treated to the FLW Outdoors Expo at the Walmart on Saturday and Sunday from noon to 4 p.m. prior to the final weigh-ins. The Expo includes Ranger boat simulators, the opportunity to interact with professional anglers, enjoy interactive games, activities and giveaways provided by sponsors, and fans can learn more about the sport of fishing and other outdoor activities. All activities are free and open to the public. Also on Sunday, country music artist Dylan Scott will perform a free live concert on the Walmart weigh-in stage at 3 p.m.