“I prefished every morning before work for a week for this tournament,” said Hilton. “I had to be to work by 8:15 a.m., so got up and fished from 4:30 a.m. to 8 a.m. making a 20-mile run up the river. I thought I was onto something, and then they dropped the water level by two feet.

“I started in the area that I found during practice, but by 11 a.m. I only had five little ones, so I decided to fish my way back down the river. I pulled into an area with half an hour left in the tournament and caught all the fish I weighed in about 10 minutes. They were stacked and ready to eat.”

According to Hilton, his honey hole was near the Illinois Bayou. It was a ledge where the bass were schooling and chasing baitfish.

“I guess all they needed was for the sun to come out to start biting.

“It’s an area I have never fished before in my life,” Hilton went on to say. “I spotted it one morning crossing the bridge. Between my co-angler and I we must have caught about 15 keepers. I was able to cull seven or eight times. It all just happened so fast. It was a good day of fishing.”

Hilton said that he was fishing with 10-inch worms, football jigs and topwater baits to catch his fish. 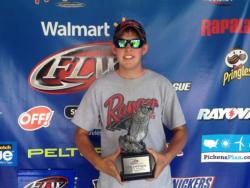