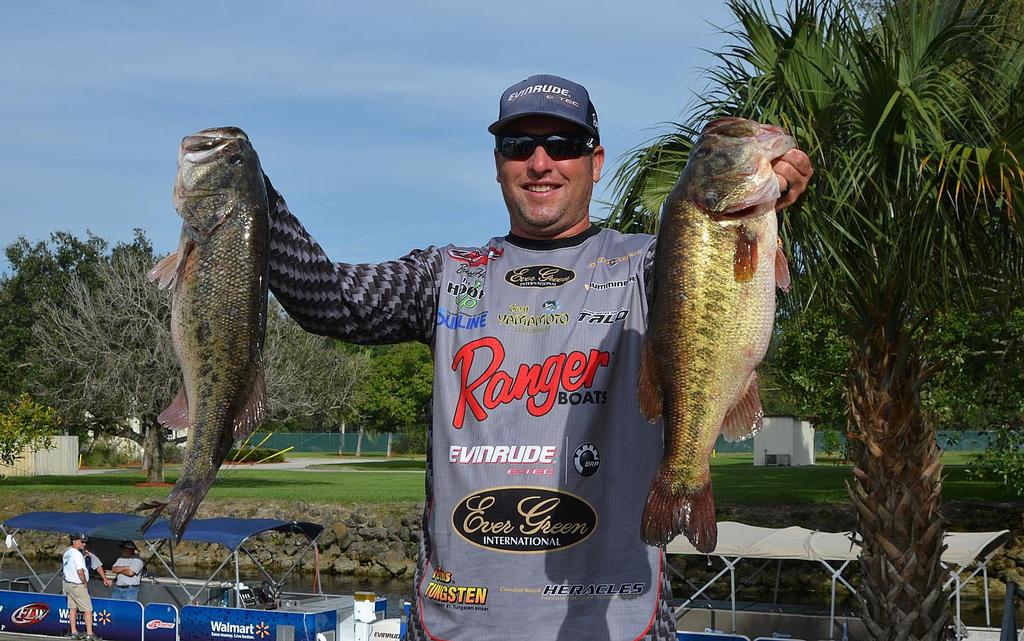 CLEWISTON, Fla. – After approximately an hour-and-a-half fog delay Thursday morning, pro angler Brett Hite of Phoenix, Ariz., wasted no time going to work on the Lake Okeechobee bass. Hite brought the second-largest five-bass limit in Walmart FLW Tour history to the scale weighing 34 pounds, 15 ounces to grab the lead after day one of the Walmart FLW Tour on Lake Okeechobee presented by Mercury.

Hite now holds a solid 7-pound, 13-ounce lead over Kellogg’s Pop Tarts pro Greg Bohannan of Rogers, Ark., heading into day two of the four-day event that features 177 of the world’s best bass-fishing anglers competing for a top cash award of up to $125,000.

“Today was just one of those magical days where everything went right for me,” said Hite, whose last FLW Tour win came on Lake Toho in 2008. “In practice, I had caught a few big ones, but nothing like today. After the fog delay, I figured that I would be able to put together a nice limit of 3- and 4-pounders, but the fish were really biting today. Every single spot that I went to I caught a good one.”

Hite was not ready to give away any of his specifics, but said that he caught fish on a number of different baits.

“I mixed things up and caught my fish on three or four different baits today,” Hite said. “I like to mix it up here. It’s burned me some years, but I’ve also cashed a lot of paychecks here. I’ve got quite a few different spots that I like. I have two major patterns working for me, but the conditions were not right today for one of them, so I fished only one today. I didn’t really want to go burning up all of my fish, so I was pretty much finished by noon or 1 p.m. Then I went practicing.

“Even this afternoon when I was practicing and fishing new stuff, I was still regularly catching 3- and 4-pounders,” Hite continued. “I caught around 15 to 18 fish throughout the entire day. I didn’t have one spot where I just pulled up and caught five in a row. It was steady all day long.

“Obviously, Florida and I get along real well,” Hite went on to say. “Everyone knows that the weather is always changing here, though, and you have to change with what the fish are doing on the fly. Today was just an awesome day. 34-15 is the biggest stringer that I have ever weighed in during a tournament, and I’m really excited to go bass fishing again tomorrow.”

The top 10 pros after day one on Lake Okeechobee are:

Amerson won the Big Bass Award on the pro side with a fish weighing 10 pounds, 6 ounces to win $500.

Pros are competing for a top award of up to $125,000 this week plus valuable points in the hope of qualifying for the 2014 Forrest Wood Cup presented by Walmart, the world championship of bass fishing. The top 35 anglers in the point standings from the six events on the 2014 Walmart FLW Tour will qualify. The 2014 Forrest Wood Cup will be in Columbia, S.C., Aug. 14-17 on Lake Murray.

FLW announced Wednesday evening that pro Brandon McMillan of Clewiston, Fla., was disqualified from the 2014 FLW Tour season opener on Lake Okeechobee. McMillan was disqualified for violating FLW Tour rule No. 5, which contains provisions restricting who pros and co-anglers can practice with.

Anglers will take off from Roland & Mary Ann Martin’s Marina & Resort located at 920 E. Del Monte Ave. in Clewiston, Fla., at 7:30 a.m. on Friday. On Saturday and Sunday takeoff will be at the Clewiston Boat Basin at 7:30 a.m. Friday’s weigh-in will be held at Roland & Mary Ann Martin’s Marina beginning at 3 p.m. Saturday and Sunday’s final weigh-ins will be held at the Walmart located at 1005 W. Sugarland Highway in Clewiston beginning at 4 p.m.

Fans will also be treated to the FLW Outdoors Expo at the Walmart on Saturday and Sunday from noon to 4 p.m. prior to the final weigh-ins. The Expo includes Ranger boat simulators, the opportunity to interact with professional anglers, enjoy interactive games, activities and giveaways provided by sponsors, and fans can learn more about the sport of fishing and other outdoor activities. All activities are free and open to the public. Also on Sunday, country music artist Josh Thompson will perform a free live concert on the Walmart weigh-in stage at 3 p.m.