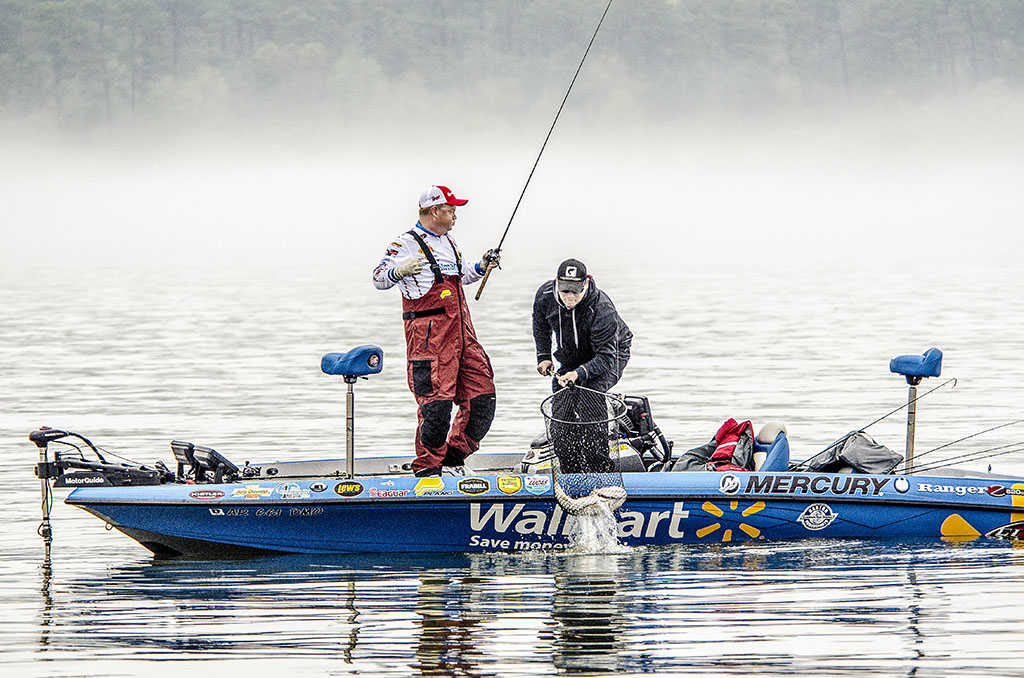 LUFKIN, Texas – Seasoned veteran Walmart pro Mark Rose of West Memphis, Ark., brought a five-bass limit to the scale on Friday weighing 19 pounds, 2 ounces to snatch the lead after day two of the Walmart FLW Tour at Sam Rayburn Reservoir presented by Chevy. Anchored by a monster 9-pound Sam Rayburn largemouth, Rose now has a two-day total of 10 bass worth 43 pounds even. He will hold a narrow 1-pound, 9 ounce lead going into day three of the four-day event, presented by the Lufkin Convention and Visitors Bureau, that features 176 of the world’s best bass-fishing anglers competing for a top cash award of up to $125,000.

“I really struggled today,” said Rose, who has earned more than $1.75 million dollars in FLW competition. “Most of the 19 pounds that I weighed in was the big 9-pounder. I didn’t catch but seven fish all day today, and one was a little 12-inch spotted bass.

“I’m fishing the outside and inside edges of grass lines,” Rose continued. “When the weather is calm and sunny like today, they get buried up in the grass. I’m going to do the same thing tomorrow, but I’m going to pray for some clouds and wind.”

Rose said that he was fishing around 15 different areas throwing a lot of plastics, crankbaits and a Strike King Red-Eye Shad. He said that most of the fish that he is catching are post-spawn.

“I’m pretty committed to this pattern,” said Rose. “I may just have to adapt a little better and get in the grass and figure out how to catch them.”

The top 20 pros that will fish Saturday on Sam Rayburn are:

Rose also won the FLW Big Bass Award and $500 on Friday on the pro side with a brute weighing 9 pounds even.

Pro Shawn Murphy of Nicholasville, Ky., was assessed a 2-pound penalty Friday for a violation of FLW Tour rule No. 8. Murphy finished the tournament in 35th place and earned $10,000.

Anglers will take off from Cassels-Boykin County Park located at FM Road 3123 (off State Highway 147) in Zavalla, Texas, at 7 a.m. on Saturday. On Sunday the top 10 anglers will take off at 7:30 a.m. Saturday and Sunday’s final weigh-ins will be held at the Walmart located at 2500 Daniel McCall Drive in Lufkin beginning at 4 p.m.

Fans will also be treated to the FLW Expo at Walmart on Saturday and Sunday from noon to 4 p.m. prior to the final weigh-ins. The Expo includes Ranger boat simulators, the opportunity to interact with professional anglers, enjoy interactive games, activities and giveaways provided by sponsors, and fans can learn more about the sport of fishing and other outdoor activities. All activities are free and open to the public. Also on Sunday, country music star Michael Ray will perform a free live concert on the Walmart weigh-in stage at 3 p.m.

Coverage of the Sam Rayburn Reservoir tournament will be broadcast in high-definition (HD) on NBC Sports Network when “FLW” airs June 7 from 11 a.m.-12 p.m. ET. The Emmy-nominated “FLW” television show is hosted by Jason Harper and is broadcast to more than 564 million households worldwide, making it the most widely distributed weekly outdoors-sports television show in the world.