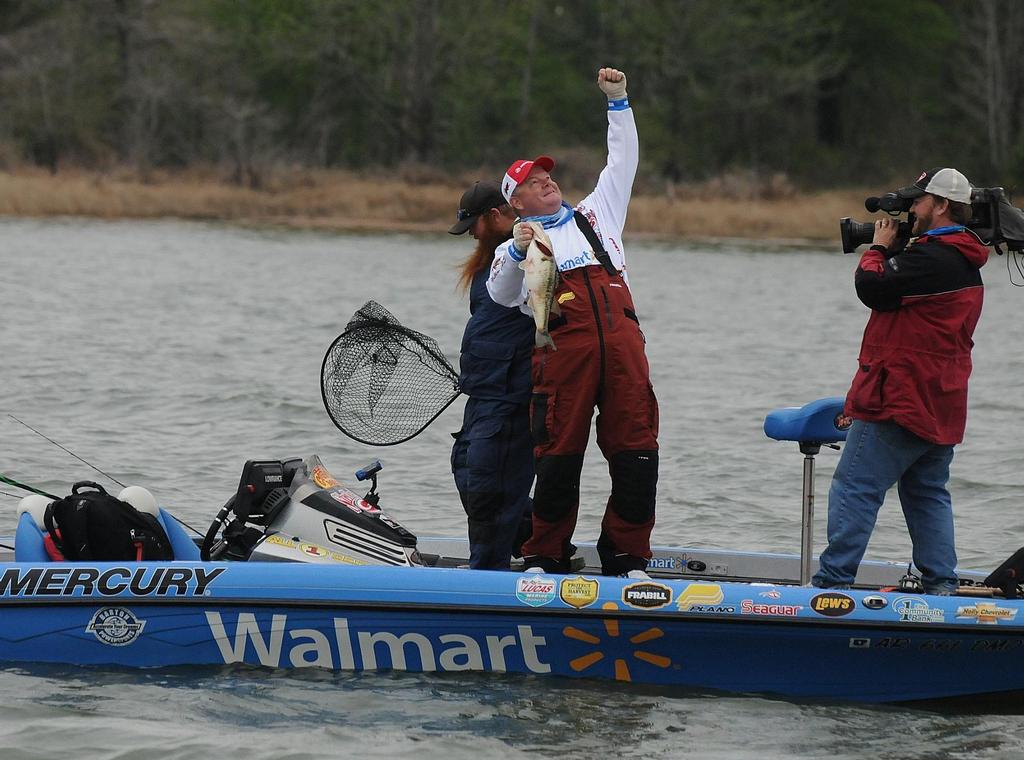 LUFKIN, Texas – Despite a nasty storm on Friday evening that muddied the water and changed the lake conditions, the best bass-fishing anglers in the world still managed to catch them at the Walmart FLW Tour at Sam Rayburn Reservoir presented by Chevy. Veteran angler Walmart pro Mark Rose of West Memphis, Ark., brought a five-bass limit to the scale Saturday weighing 16 pounds, 1 ounce to increase his lead heading into the final day of competition. The tournament, hosted by the Lufkin Convention and Visitors Bureau, features 176 of the world’s best bass-fishing anglers competing in the four-day event for a top cash award of up to $125,000.

“I’m just riding what I’ve got, and riding it hard,” said Rose, who has two career victories in FLW Tour competition. “I’ve been so blessed in the mornings to have enough wind and clouds to produce one or two big fish for me. But it’s very hard to win a tournament basing it on one spot where you’re only getting one big fish each day. If I don’t get those wind and clouds, you’re going to see me coming in here tomorrow with a bunch of little spotted bass.”

Rose said that he will remain committed to his grass lines in the mid-lake area, no matter what happens with the weather tomorrow. He has weighed in fish this week throwing soft plastics, crankbaits and a Strike King Red Eye Shad. Today, he said that he mixed in a drop-shot rig as well.

“I’m going to do the same thing tomorrow,” Rose said. “I have spent most of my time the last few years trying to work on my off-shore game and I feel like I’d be shooting myself in the foot by trying to fish shallow against the best shallow-water fisherman in the business. I need to just keep doing what I know best.

“I’m not even thinking about winning right now,” Rose went on to say. “I’m thinking about going out tomorrow and producing to the best of my ability. I fish hard, honor God, and leave the results up to Him and that’s what I want to do tomorrow. If it’s my time to win, I’ll win.”

The top 10 pros advancing to the final day of competition on Sam Rayburn Reservoir are:

“I can’t believe that I won this thing,” said Self, a former FLW College Fishing standout who had seven top-10 finishes competing for the University of North Carolina-Charlotte bass club. “I had all of my weight today by 10 o’clock, but I couldn’t catch a big one. I never thought that I was going to win.

Self said that he caught his fish this week throwing a Bill Lewis Rat-L-Trap and Z-Man Original ChatterBait on Thursday and Friday, then switching to an E.R. Lures football jig and a shaky-head rig.

“I would not be here today if it were not for College Fishing,” Self said. “The FLW College Fishing program is a real good deal. I fished them every year that I was in college. This year I decided to take it to the next step and fish the FLW Tour as a co-angler.”

Self’s rookie season as a co-angler has been very successful thus far. After finishing in 6th-place at the FLW Tour event earlier this month at Lake Hartwell, Self now finds himself looking forward to the Forrest Wood Cup.

“I’ve been thinking about that Forrest Wood Cup all year. I’ve fished on Lake Murray quite a bit and I feel like I can do pretty good if I can get in there.”

Overall there were 50 bass weighing 121 pounds, 4 ounces caught by co-anglers Saturday. Only two co-anglers were able to boat a five-bass limit.

In addition to the top award of $25,000, co-anglers were also fishing this week for valuable points that would help them qualify for the 2014 Forrest Wood Cup presented by Walmart. The top 35 co-anglers in the point standings from the six events on the 2014 Walmart FLW Tour will qualify.

The final 10 anglers will take off from Cassels-Boykin County Park located at FM Road 3123 (off State Highway 147) in Zavalla, Texas, at 7:30 a.m. on Sunday. Sunday’s final weigh-in will be held at the Walmart located at 2500 Daniel McCall Drive in Lufkin beginning at 4 p.m.

Fans will also be treated to the FLW Expo at Walmart on Saturday and Sunday from noon to 4 p.m. prior to the final weigh-ins. The Expo includes Ranger boat simulators, the opportunity to interact with professional anglers, enjoy interactive games, activities and giveaways provided by sponsors, and fans can learn more about the sport of fishing and other outdoor activities. All activities are free and open to the public. Also on Sunday, country music star Michael Ray will perform a free live concert on the Walmart weigh-in stage at 3 p.m.

Coverage of the Sam Rayburn Reservoir tournament will be broadcast in high-definition (HD) on NBC Sports Network when “FLW” airs June 7 from 11 a.m.-12 p.m. ET. The Emmy-nominated “FLW” television show is hosted by Jason Harper and is broadcast to more than 564 million households worldwide, making it the most widely distributed weekly outdoors-sports television show in the world.