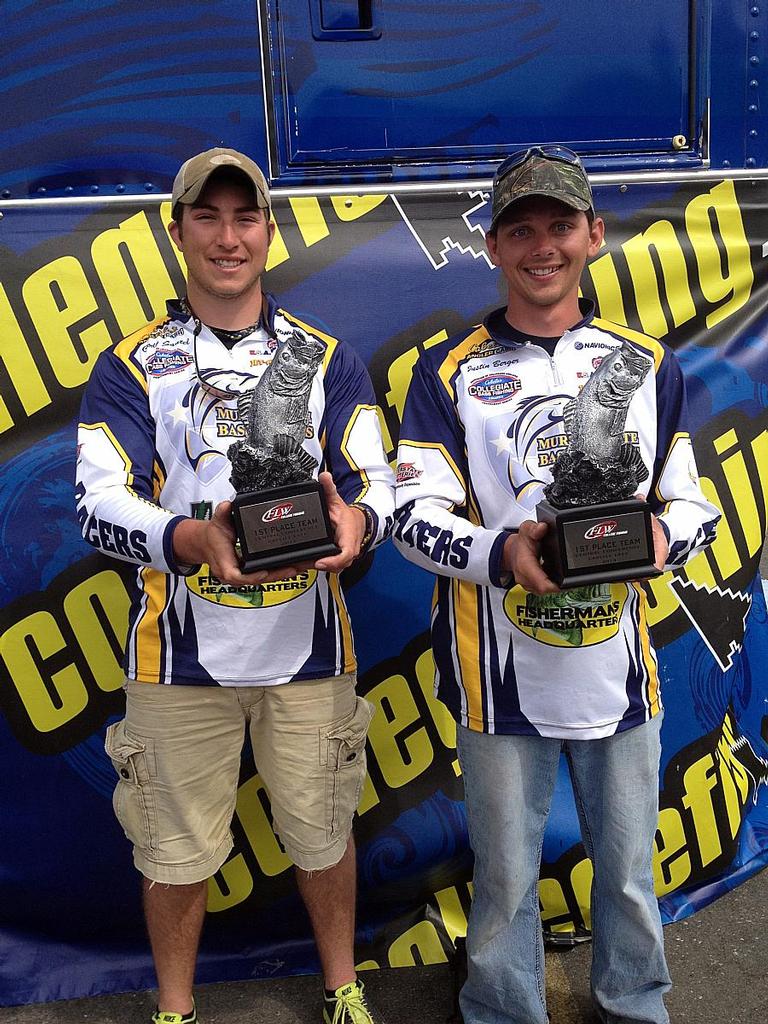 Cody Santel and Justin Berger of Murray State walked away with $2,000 for their bass club and qualified for the Central Conference Invitational on Kentucky Lake.
April 26, 2014 • MLF • Abu Garcia College Fishing

CARLYLE, Ill. – The Murray State University team of Cody Santel of Petersburg, Ill., and Justin Berger of Freeburg, Ill., won the FLW College Fishing Central Conference tournament on Carlyle Lake Saturday with five bass weighing 13 pounds and 10 ounces. Their win earned the team $2,000 for their bass club and qualified them for the 2014 Central Conference Invitational tournament on Kentucky Lake.

Santel and Berger battled the tough conditions on Carlyle and won by a solid 1-pound, 5-ounce margin in their first FLW College Fishing tournament together as a team.

“We eliminated a lot of water with our pre-fish,” said Berger. “We spent three full days out here and we ended up finding them today. We caught two of our fish in cuts on rock transitions where the rock got smaller but before it turned to mud banks. Our other bass came off of the end of laydowns in 7- to 8-feet of water. We were dragging a tube and a Zoom Brush Hog through the treetops and that’s where we caught three of them including our two biggest fish.”

“The lake was really windy today and Carlyle is really muddy,” explained Santel. “Once we had our limit we really couldn’t find any more water that looked like what we were fishing, so we just took a boat ride back in.”

“I grew up about an hour away from here and I have fished Carlyle quite a few times,” said Berger. “I think some of my experience helped out a little bit because I know how fish typically are caught and act in this lake.”

“We’re excited that we can go fish the Invitational at Kentucky Lake now,” added Santel. “Our chances are going to be pretty good. We had another Murray State team qualify at the first event on Table Rock Lake, so we’re expecting big things.”

The top 15 teams that advanced to the 2014 FLW College Fishing Central Conference Invitational are: