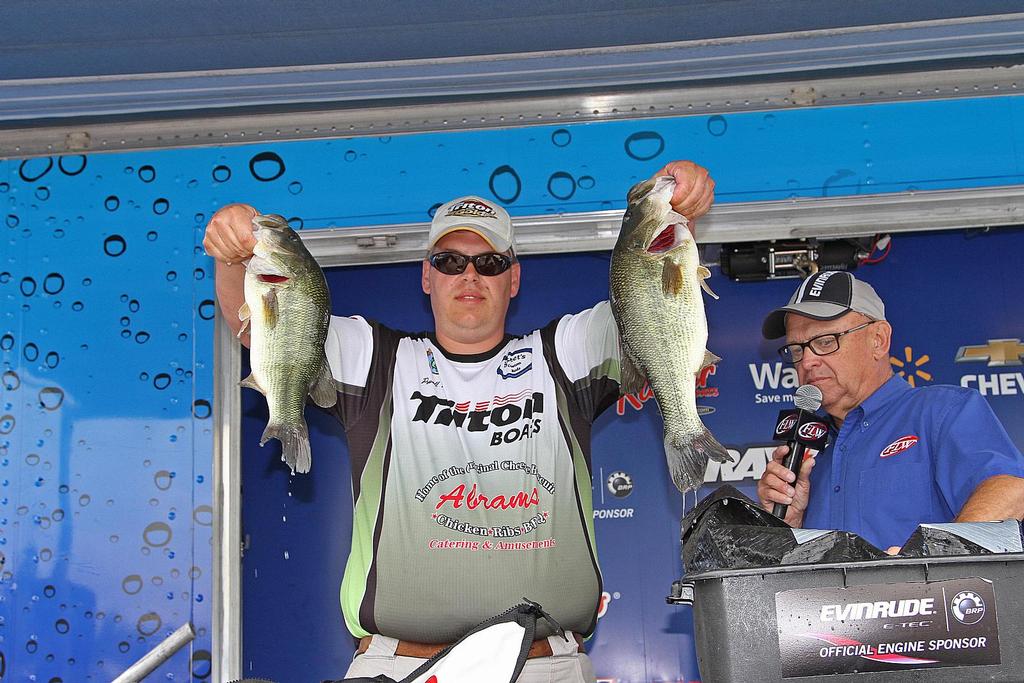 Kemp, who weighed a tournament-best 19-2 on Thursday, moved up from fifth place on the final day to earn his second win in FLW competition.

“I caught most of my fish in the morning on a topwater bait,” says Kemp. “I was throwing a fry-colored Lobina Lures Rico. I threw it around matted grass at low tide. I fished all the way around the mat and caught one flipping and one on a ChatterBait, then I picked that topwater up and probably caught 30 fish on it.

“I flipped grass in the middle of the day and culled for ounces,” Kemp adds. “Then, at the very end of the day, I hit one spot with some wood and I caught a 5-pounder and a 3-pounder on a black and blue-colored Strike King Bitsy Flip Jig with a NetBait Paca Craw trailer.

“When I had my big bag on the first day I had to go to lighter line and smaller baits,” Kemp explains. “I had to finesse them a little this week.

“After I caught my two big fish at the end of the day today, I thought I had a shot to win,” Kemp says. “I wasn’t sure, but I knew I had a chance. It’s unbelievable to win. I have to thank my wife. I was considering not fishing this event, but she pushed me and it just worked out.”

The top 10 pros on the Potomac River were:

Kemp also caught the biggest bass of the tournament in the pro division Thursday – a 6-pound, 10-ounce bass – that earned him the day’s Big Bass award of $286.

Kermit Crowder of Matoaca, Va., won the co-angler division and a Ranger Z117C with an Evinrude or Mercury outboard motor, as well as $5,000 for being Ranger Cup qualified, with a three-day total of 15 bass weighing 39 pounds, 8 ounces.

The top 10 co-anglers on the Potomac River were:

Ives caught the biggest bass of the tournament in the co-angler division Thursday – a 7-pound, 7-ounce bass – that earned him the day’s Big Bass award of $190.

The Rayovac FLW Series on the Potomac River was hosted by the Charles County Board of Commissioners and the Charles County Government – Office of Tourism. It was the first of three Northern division events in 2014. The next Rayovac FLW Series Northern Division tournament will be held July 17-19, on Lake Champlain in Plattsburgh, N.Y. For a complete schedule, visit FLWOutdoors.com.