Robert Crosnoe of Inverness, Fla., won the Oct. 2-4 Walmart BFL Regional on the St. Johns River with a three-day total weight of 47 pounds, 6 ounces. He was awarded a new Chevy 1500 Silverado and Ranger boat with a 200 horsepower engine for his efforts. Angler: Robert Crosnoe.
October 4, 2014 • MLF • Phoenix Bass Fishing League

PALATKA, Fla. – Robert Crosnoe of Inverness, Florida, weighed a three-day total of 14 bass totaling 47 pounds, 6 ounces to win the Walmart Bass Fishing League Regional Championship on the St. Johns River Saturday. For his victory, Crosnoe took home a Ranger Z518C with a 200-horsepower Evinrude or Mercury outboard and a Chevy 1500 Silverado as well as entry into the 2015 BFL All-American presented by Chevy. This regional tournament featured the top 40 boaters and 40 co-anglers from each of the Bama, Bulldog, Choo Choo and Gator divisions.

Crosnoe spent all of his practice time over 50 miles south of Palatka, fishing in Lake Dexter and Lake Woodruff, and made a breakthrough just before the tournament when he discovered a horde of fish in some recently-sprayed hyacinth mats in Dexter.

“Most of the mats were around 3-feet deep,” said Crosnoe. “There was some sort of viny, green plant, and where that was mixed in with the dead hyacinths is where I would get most of my bites. Practice was unbelievable. I went through that area and got 25 bites and set the hook twice and caught a 7-pounder and a 4-pounder.

“The Wednesday before the tournament, the St. Johns rose to flood stage and the state made a big stretch of river an idle zone,” Crosnoe detailed. “It took me an hour and a half to get to my spot. Once I got there, I was just flipping and punching heavy mats with a 1½-ounce weight.”

Crosnoe boxed 18-12 on day one, but lost a fish he estimated to be 7-pounds on the second day and failed to catch a five-bass limit.

“The third day I had no choice but to go back,” said Crosnoe. “I knew in my heart that the fish were there. I told my co-angler while we were in the idle zone that I could bust a 28-pound bag. In the first hour I caught a 9-pounder and two 4-pounders. Then I went and fished some new water, just like it was a practice day. I found one stretch that had a lot of bream and I caught another 4-pounder and lost one that looked like it was 8 or 9 pounds. Fortunately, I’d already caught enough to win.

“I made the right decisions, it was awesome and it feels great to get the win,” said Crosnoe, whose 22-pound, 14-ounce catch on the final day vaulted him from 10th to first.

Crosnoe said that he flipped a Hematoma-colored Reaction Innovations Kinky Beaver the entire time, and left the ramp on day three with just one rod on deck. 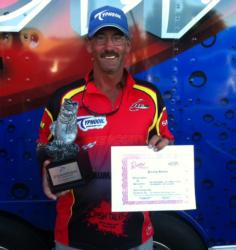 Ernie Thompson of Anthony, Florida, won the co-angler division with a three-day total of 14 bass totaling 34 pounds, 6 ounces. For his efforts, Thompson took home a Ranger Z518 with a 200-horsepower Evinrude or Mercury outboard along with a berth in the 2015 BFL All-American tournament.

The top six co-anglers that qualified for the 2015 BFL All-American:

The BFL Regional event held on the St. Johns River was hosted by the Putnam County Tourist Development Council.