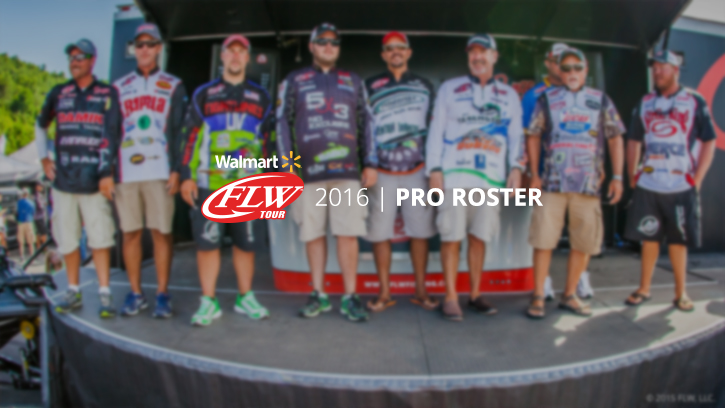 MINNEAPOLIS – FLW announced today the complete professional angler roster of 171 for the upcoming 2016 Walmart FLW Tour season, the 21st season of the FLW Tour. The 2016 FLW Tour will feature six regular-season tournaments, along with the addition of two fall Invitational tournaments, with competition kicking off Feb. 4-7 at Lake Okeechobee in Clewiston, Florida.

The top 100 pros and top 10 co-anglers from the 2015 FLW Tour, the top 10 pros from each of the five 2015 FLW Series divisions, the 2015 TBF National Champion, and the 2015 All-American boater champion all received priority invitations to join the Tour.

“We couldn’t be more excited to kick off our FLW Tour season in just six short weeks at Lake Okeechobee,” said Kathy Fennel, FLW President of Operations. “We have a fantastic mix of anglers and the race for the 2016 Forrest Wood Cup is going to be more exciting than ever.”

The entire 2016 Walmart FLW Tour roster can be found at FLWFishing.com.

In FLW Tour competition anglers are vying for valuable points in hopes of qualifying for the 2016 Forrest Wood Cup, the world championship of bass fishing. The 2016 Forrest Wood Cup will be in Huntsville, Alabama, Aug. 4-7 on Wheeler Lake and is hosted by the Huntsville/Madison County Convention and Visitors Bureau. Anglers could win as much as $300,000 – professional bass fishing’s richest prize.

For complete details and updated information visit FLWFishing.com.  For regular updates, photos, tournament news and more, follow us on Facebook at Facebook.com/FLWFishing and on Twitter at Twitter.com/FLWFishing.