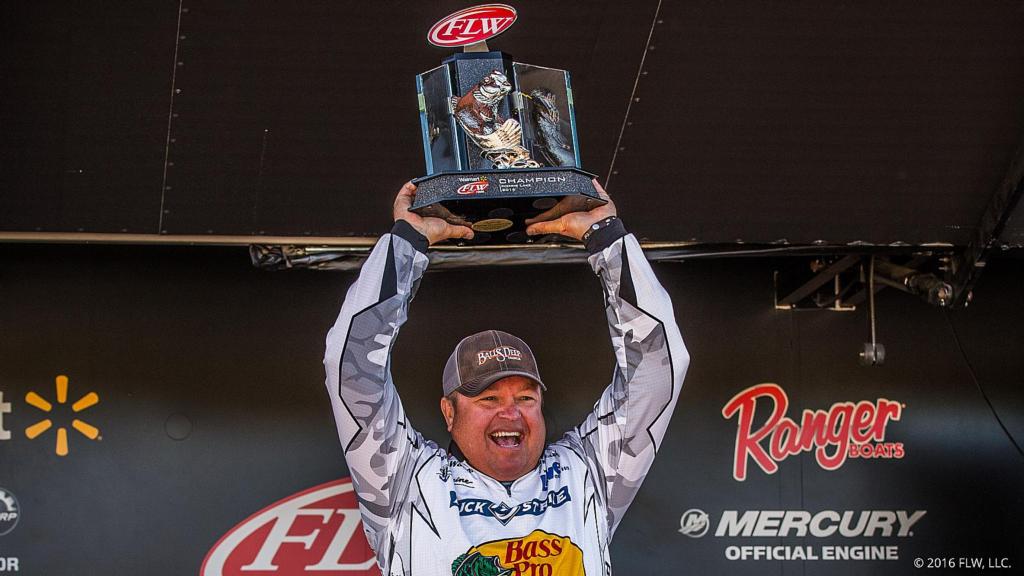 Watson’s three-day total of 15 bass totaling 36-10 gave him the win by a narrow 3-ounce margin over second-place angler Jason Lambert of Pickwick Dam, Tennessee (36-7). In addition, Watson became just the second angler to qualify for the 2017 Forrest Wood Cup – the world championship of pro bass-fishing.

“I thought I blew it today, so I am absolutely floored,” said Watson, who pushed his FLW career earnings to more than $276,000. “I’ve won a B.A.S.S. Open, I’ve won a P.A.A. event, but I’ve never won an FLW Tour event. I’ve been fishing these things a long time and I bleed FLW. This is such a huge win for me – by far the biggest financial win of my career. And to punch my ticket to the Forrest Wood Cup before the season even starts, this is big time.”

“Fall is just my time of the year,” Watson said. “I have more confidence from August to December than I do at any other time of the year. I really thought I was going to whack them today, but I got caught up and didn’t have any new water that I felt comfortable running.

“I caught two small ones in the last 15 minutes that gained me a couple of ounces and fortunately those fish were enough,” Watson continued. “I caught one smallmouth on a spinnerbait today as well – the only spinnerbait fish that I caught and the only smallmouth that I weighed in – and that was a key fish for me today as well.

“In the weigh-in line I saw Lambert’s bag and I saw Adams’ bag and I didn’t think that I had enough to win,” Watson said. “It’s hard to win any bass tournament, but it’s even harder when you’re fishing against the best guys in the world. Those guys are absolute hammers and to get the win today is just something else.”

Overall there were 74 bass weighing 154 pounds, 7 ounces caught by the 19 of the final 20 pros Saturday. The catch included nine five-bass limits.

The Walmart FLW Tour Invitational at Norris Lake presented by Quaker State was hosted by the Anderson County Tourism Council. It was the final tournament of the season for FLW Tour pros.

The Walmart FLW Tour – the most competitive Tour in professional bass-fishing – will open the 2017 season in a tournament Feb. 2-5, 2017 on Lake Guntersville in Guntersville, Alabama.