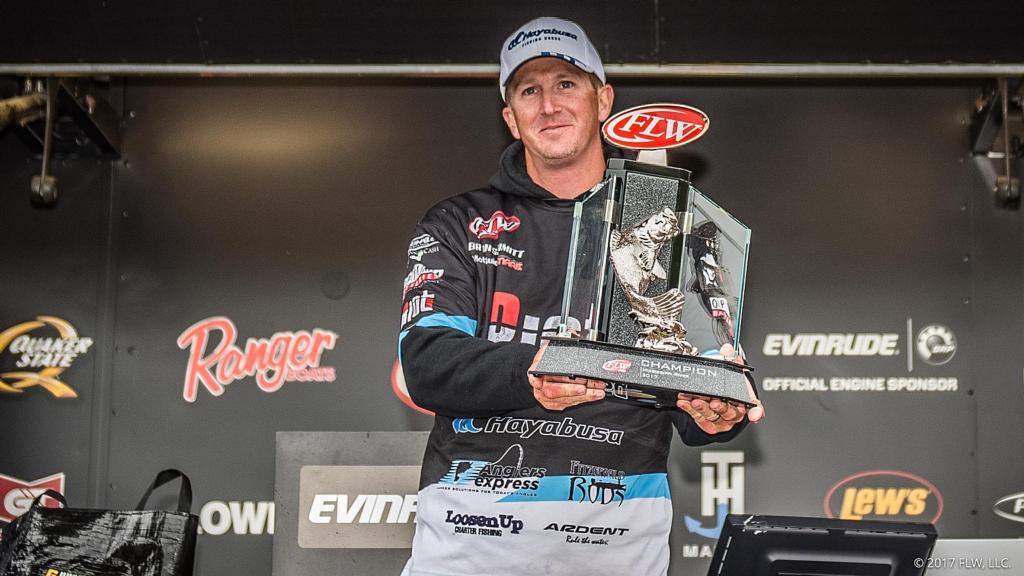 Already a well-known river expert, Schmitt built his career by picking apart the Potomac and James rivers. Schmitt was able to apply that expertise to Pools 7, 8 and 9 on the Mississippi River this week and earn his first career win on the FLW Tour.

“My knowledge of the rivers I fish back home was 100-percent key for me this week,” said Schmitt, a five-year Tour veteran who has amassed more than $680,000 in FLW competition. “I’ve never been here, but I fell in love with how it was setting up.”

Schmitt said his sweet spot this week was a barricaded pond on the lower end of Pool No. 8. He described it as a section of water near the main-river channel that was surrounded by sandbars which protected fish in multiple phases of the spawn.

“I don’t know if it was there from years and years of current building up the sandbars, but at some point local authorities may have added riprap to make it stay,” said Schmitt. “It had two main trenches that ran through it and had plenty of deep water. At the very top there was a hole in the rock jetty that let current flow in. It had all the right variables – just enough current to bring food in, grass and spawning habitat, and the deep water for when they were done.”

Schmitt said he spent the majority of his tournament in the area, noting that all but three of the fish he weighed in came from it.

“I think the fish that I was catching were both prespawn and postspawn,” Schmitt said. “Fresh fish were moving in and the big ones that were done were moving out.”

Schmitt said that his primary lure this week was a black and blue-colored prototype Riot Baits Swim Jig with a swimming trailer. He also used a black and blue-skirted vibrating jig with a Riot T3 Tattle Tail Swimbait and a 5-inch Texas-rigged Riot Stick stickbait with a 3/16-ounce tungsten weight.

“Before my main pattern evolved, I caught quite a few by just pitching the stickbait to grass,” said Schmitt. “It got me a lot of key fish on the first two days, but the bigger ones wanted the moving baits.”

The final event on the FLW Tour schedule for the 2017 regular-season happens to be on the Potomac River – a place where Schmitt has three Costa FLW Series wins. Schmitt expressed that he is eager to finish the season on a high note.

“I’ve got the momentum now,” said Schmitt. “After all of this, words can’t describe how excited I am to get back out there and compete on the Potomac.”

The top 10 pros finished on the Mississippi River:

Overall there were 50 bass weighing 132 pounds, 2 ounces caught by pros Sunday. All of the final 10 pros brought in five-bass limits.

In FLW Tour competition, pros and co-anglers are randomly paired each day, with pros supplying the boat, controlling boat movement and competing against other pros. Co-anglers fish from the back deck against other co-anglers. The full field of anglers competed Thursday and Friday. Co-angler competition concluded following Friday’s weigh-in, while the top 20 pros based on their two-day accumulated weight advanced to Saturday. Only the top 10 pros continued competition Sunday, with the winner determined by the heaviest accumulated weight from the four days of competition.

Television coverage of the FLW Tour at Mississippi River presented by Evinrude will premiere in high-definition (HD) on NBC Sports Network (NBCSN) Aug. 2 from Noon-1 p.m. EDT. The Emmy-nominated "FLW" television show airs on NBCSN, the Pursuit Channel and the World Fishing Network and is broadcast to more than 564 million households worldwide, making it the most widely distributed weekly outdoors-sports television show in the world.