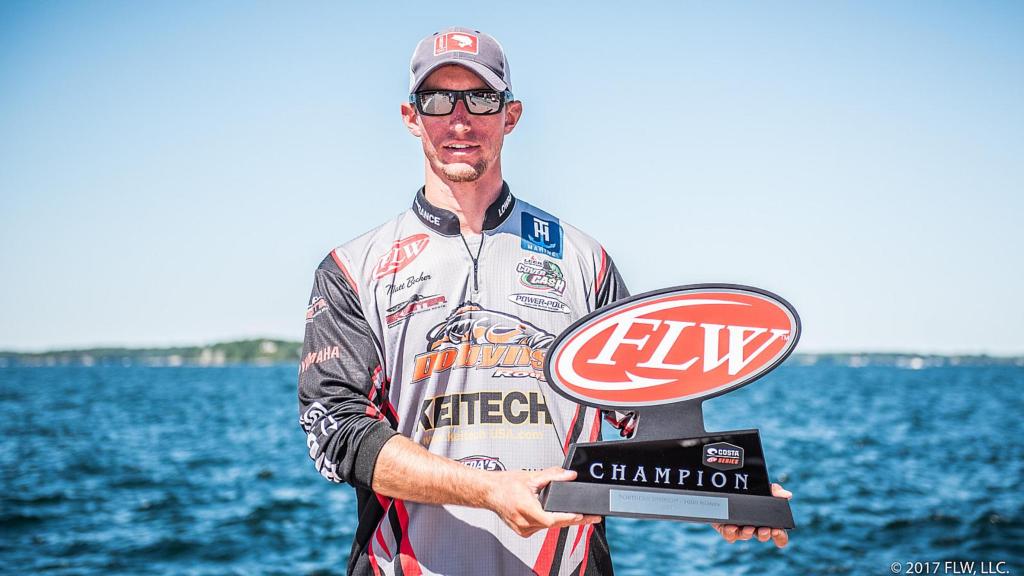 “Words can’t describe how I’m feeling right now,” said Becker, who earned his first career-victory in FLW competition. “I was just hoping to cash a check, so this is unbelievable.”

Becker said he spent the three-day tournament picking apart two primary stretches of water on Lake Ontario, near Galloo Island. He said he relied on one lure– a Yamamoto Shad Shape Worm on a drop-shot rig.

“Of the fish I weighed in this week, each of my areas produced about half of them,” said Becker. “Both locations were 25- to 30-feet deep and had rocky bottoms. Each had a drop that reached 50 to 60 feet of water, but the first spot was steep while the second sloped off more gradually.”

Becker said that each area had a 50- by 50-yard sweet spot that produced more notable catches. Every bass he weighed in was a smallmouth.

“After catching about 50 keepers on days one and two I only caught around 15 to 20 today, but they were a lot bigger,” said Becker. “The key for me was being able to see the fish on my Lowrance electronics during practice. Not every area that had rocks on the bottom had fish out there.”

Aaron Stone of Rome, New York, caught a 6-pound, 8-ounce bass Friday – the heaviest of the tournament in the Pro Division. For his catch, Stone earned the day’s Boater Big Bass award of $300.

Gary Haraguchi of Redding, California, won the Co-angler Division and a new Ranger Z175 with a 90-horsepower Evinrude outboard motor, along with a $5,000 Ranger Cup Bonus. Haraguchi earned his win with a three-day total of 15 bass weighing 53 pounds, 2 ounces.

Brett Scullion of Lakefield, Ontario, Canada, caught the biggest bass of the tournament in the Co-angler Division Friday, a fish weighing 6 pounds, 11 ounces that earned him the day’s Co-angler Big Bass award of $200.