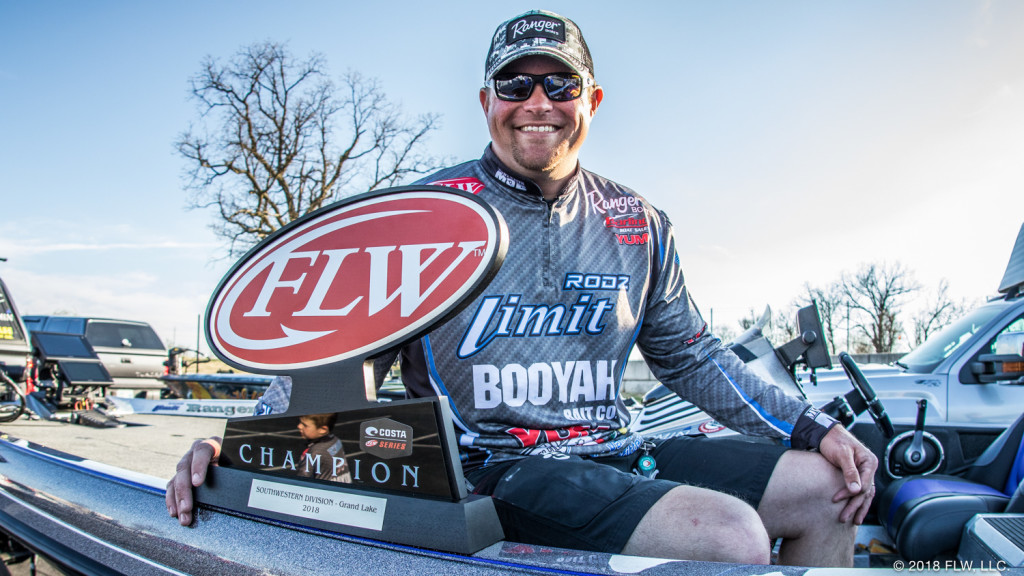 GROVE, Okla. – Pro Christopher Jones of Bokoshe, Oklahoma, won the Costa FLW Series at Grand Lake presented by Ranger Boats Saturday after bringing a limit of bass weighing 17 pounds, 10 ounces to the scale. Jones’ three-day total of 47-3 put him into a tie with FLW Tour pro Jeff Sprague of Point, Texas, however, according to tournament rules, ties on day three are resolved by Day-Two standings. Jones and Sprague placed fourth and fifth, respectively, on the tournament’s second day, so Jones was declared the winner and earned $88,700, including a brand new Ranger Z518C boat with a 200-horsepower Evinrude or Mercury outboard.

Jones said that he spent the tournament fishing in the mid-lake area, running pockets and targeting secondary points and docks. He said his main bait throughout the week was a ½-ounce chartreuse and white-colored BOOYAH spinnerbait with a 3½-inch YUM Pulse swimbait trailer.

“My main deal was fishing areas where the bass were staging getting ready for the spawn,” said Jones, who earned his first career win in Costa FLW Series competition after three prior wins in the T-H Marine Bass Fishing League (BFL). “I was slow-rolling the bait behind the docks. The key was making precise casts – sometimes multiple casts to the same dock or cable.”

Jones said that he managed just four bites on Day One, but did put all of them in the boat. His best day was Day Two on Friday when he caught 13 keepers, and he added another 10 or 11 keepers on Saturday. Jones said that he also spent a little time each day on a stretch of main-lake riprap where he caught a couple of keepers on a YUM YUMbrella Flash Mob Jr., also with 3½-inch YUM Pulse Swimbaits.

“I had a couple of key bite on the umbrella rig off of a rocky point,” Jones said. “I had a lot of confidence in my areas. There were a lot of boats fishing around me, but the water was really dirty – only about 10-inches of clarity – and most people were fishing too fast.”

Collings caught a 7-pound, 1-ounce bass Friday – the biggest of the tournament – and earned the day’s Boater Big Bass award of $300.

Steven Meador of Bentonville, Arkansas, won the Co-angler Division and a Ranger Z175 with a 90-horsepower outboard motor and a $5,000 Ranger Cup bonus with a two-day total of 11 bass weighing 27 pounds, 3 ounces. Alan Bernicky of Joliet, Illinois, finished runner-up with eight bass weighing 23-13, good for $5,350.

WIckham caught the biggest bass of the tournament in the Co-angler Division Thursday, a bass weighing 6 pounds, 14 ounces that earned him the day’s Co-angler Big Bass award of $200.